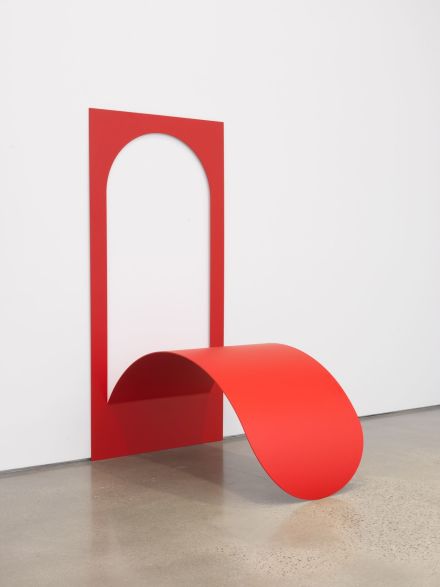 Judith Hopf, Tongue as a Wall Piece (2019), via Metro Pictures

Taking over the ground floor of Metro Pictures Gallery for her first exhibition with the space, the Berlin-based artist Judith Hopf has orchestrated a range of works drawing on surreal juxtapositions of space and material, narrative and image that marks a strong opening to the fall season. Comprised of three different sculptural series–Walls, Tongues, and Pears–the works on view further Hopf’s practice of employing everyday construction materials and common manufacturing processes to investigate the social dynamics of the contemporary built environment and its influence on human behavior. 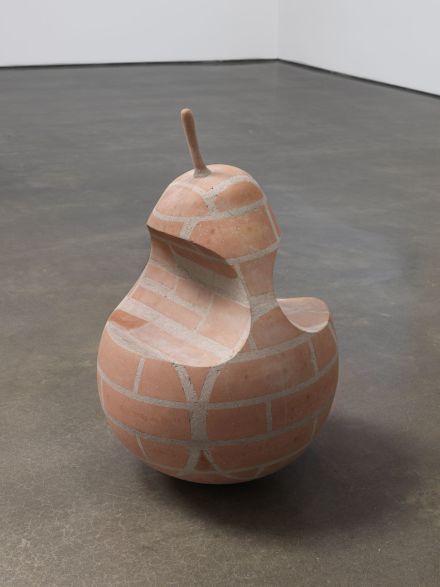 Judith Hopf, A pear with two bites (2019), via Metro Pictures.jpg

Hopf’s works, in their minimal scale, are particularly noteworthy in their concision, twisting familiar forms over, under, around and through each other, each time allowing the conversation between elements to animate her works further. Fluctuating between the sculptural and the architectural, the Walls and Pears on view are an extension of Hopf’s recent series of large red brick works. In the front gallery, a six-by-seven-foot brick wall appears to have had a chunk bitten off the top and a very large hole drilled through the middle. The cut-out brick circle is presented nearby on the gallery floor, provoking one to question if what is missing is just as or more important than what remains. Elsewhere, three oversized pear shapes have been mechanically carved from solid brick cubes. These pieces are echoed on the walls nearby, with drawings tracing the forms and referencing their surreal juxtaposition of the natural and the man-made. 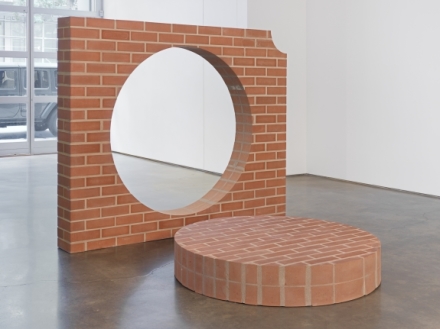 Judith Hopf, A Hole and the Filling of the Hole (2019), via Metro Pictures 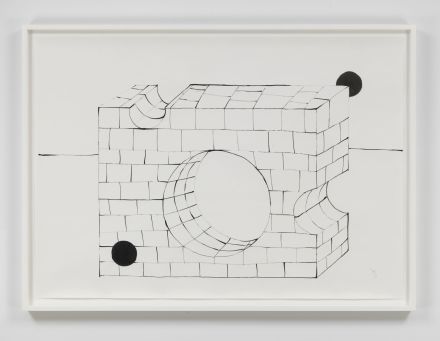 Similar to the wall, two round holes have been cut through one of the pears. In a contradictory combination, Hopf challenges our habitual views of the world by representing this easily bruised, perishable fruit in one of the most sturdy, long-lasting building materials. Hopf seems to pose a world not so much withheld from decay and destruction, but one in which these elements are bound up in the act of construction and building simultaneously. The works are almost suspended between timeframes, both in the midst of construction and deconstruction. 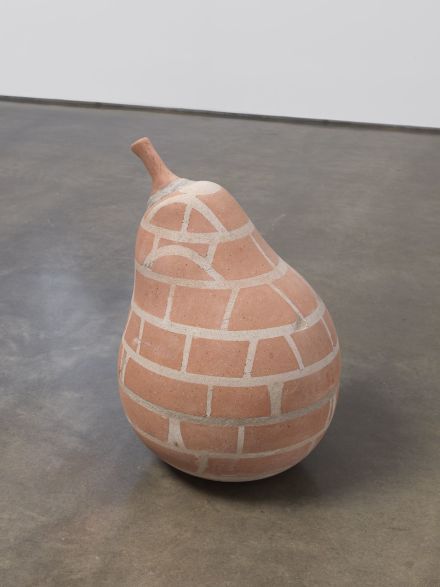 In the back gallery, a group of bright red tongues made from aluminum take over the space, mimicking the gestures a tongue might make when emerging from a mouth. To Hopf, these comical, oversized tongues symbolize the lack of daily conversation about the conditions of life in cities. Installed with a new wall painting, they also serve as a set of surreal architectural elements, windows and doors to a secret hidden space. Adding iterative wrinkles to her works in the front gallery, Hopf hints at environments and bodies moving ever closer together, and asks to what ends we might be able to rethink the construction and subdivision of space in ways that keep the human, and the natural world, closer at hand.

This entry was posted on Wednesday, September 18th, 2019 at 5:57 pm and is filed under Art News, Featured Post, Go See, Show. You can follow any responses to this entry through the RSS 2.0 feed. You can leave a response, or trackback from your own site.