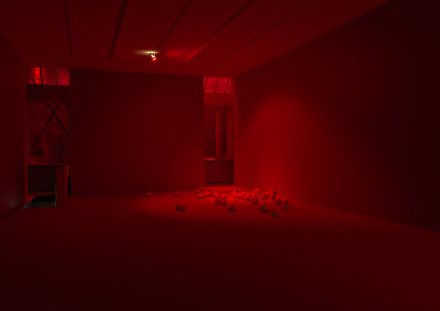 Douglas Gordon, Happy Birthday to Me (2008-ongoing), via Eva Presenhuber

Presenting a range of works continuing his interest in cinema and the collective memory, the construction of images on the screen and in our heads, artist Douglas Gordon returns to Eva Presenhuber in New York City with a selection of works centered around his ongoing installation Happy Birthday To Me…, accompanied by a new 24-part burned print work titled Self Portrait of You + Me (Neighborly Love), a film installation titled Video Diptych, and more, compiling the artist’s respective works into both a portrait of his own practice, and that of the concepts described above. 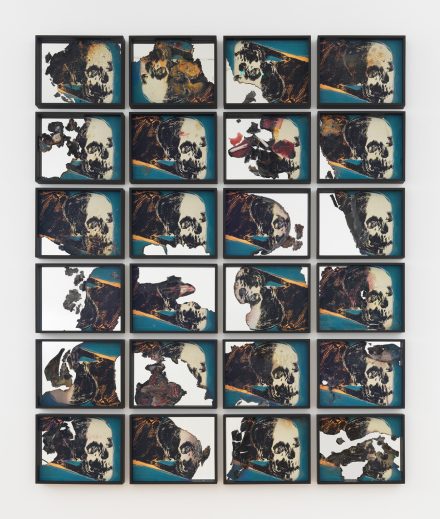 Douglas Gordon, Self-Portrait of You + Me (Neighbourly Love) (2019), via Eva Presenhuber

In the central installation of the show, viewers find themselves confronted by human skull replicas, strewn about a corner of the gallery and accented by a wash of red light and red carpeting, creating a somber atmosphere that emphasizes a sense of both doom and sacral energies, a space of both death and ritual. These concepts, colliding with each other in the space of the gallery, underscore Gordon’s interest in cultural artifacts. Abstracted from any immediate reading, the work nevertheless recalls filmic imagery, constructed tableau as if culled from any number of dramatic film scenes. 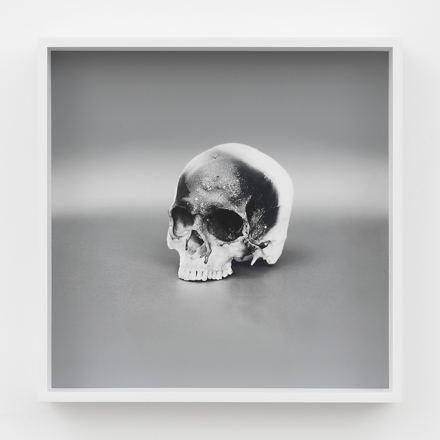 Douglas Gordon, Under My Skin (2019), via Eva Presenhuber

By contrast, Self Portrait of You + Me (Neighborly Love); highlights the artist’s ambivalent relationship to pop art and, in particular, to the larger than life stature of Andy Warhol. While the latter’s immortal icons leave no room for the dark side of human existence, Gordon burns holes into their shiny surfaces. Drawing on the same memento mori explored in Warhol’s iconic screen prints for both pieces, Gordon allows their impact in both works to vary between immersive gravity and a more subdued, deconstructed depiction. The skulls appear once again in Video Diptych, floating in water as a third state in which they also seem to tie in to Monet’s depictions water lilies. 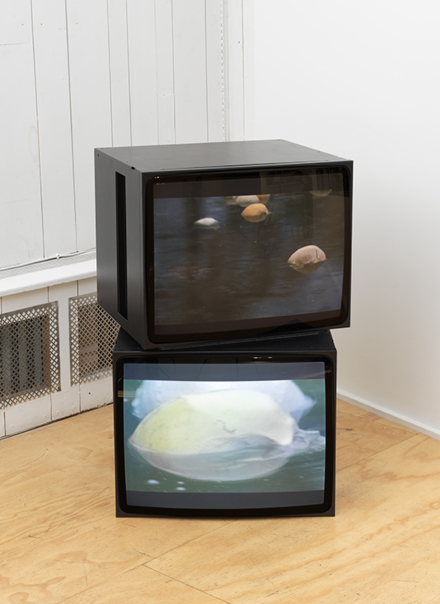 The result of the show is a body of works that seem to swim in and out of focus, twisting the language of several decades and even centuries of artistic touchstones and cultural moments into a series of works. This hypertextual image breaks the art object down and assembles it anew, over and over again, as if the life of the work itself had gone through several stages of death and rebirth.

This entry was posted on Tuesday, November 19th, 2019 at 1:55 pm and is filed under Art News, Featured Post, Show. You can follow any responses to this entry through the RSS 2.0 feed. You can leave a response, or trackback from your own site.