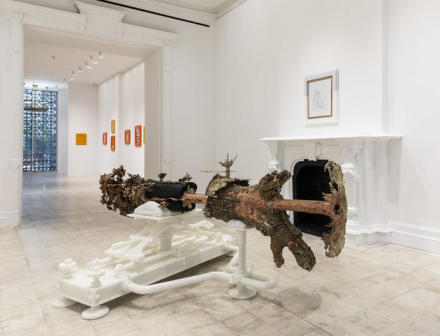 Artist Matthew Barney’s victory lap continues after the 2018 release of his latest film Redoubt, a wolf hunt in Idaho’s rugged Sawtooth Mountains that continues the artist’s ongoing preoccupation with landscape as both setting and subject. For his current show in New York, on view at Gladstone Gallery, the artist presents a set of new drawings, etchings, and sculpture that draw from the film, and expand on its allegorical and cosmological themes. 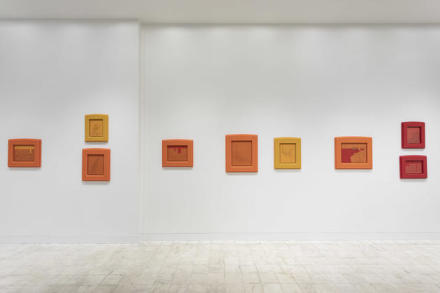 Redoubt adopts the ancient myth of Diana, goddess of the hunt, and Actaeon, a hunter who trespasses on her, as its narrative framework. In Redoubt, an Engraver, played by Barney, creates a series of plein-air drawings on copper plates as he stalks Diana and her attendants. An Electroplater in a remote laboratory subjects them to a chemical process that transforms the Engraver’s drawings: each plate is immersed in an electroplating solution, causing copper growths to form on the engraved lines. Her actions, undertaken with a ritualistic focus, transform the engravings into talismanic objects, connecting them to Barney’s work in drawing, sculpting, and performance. 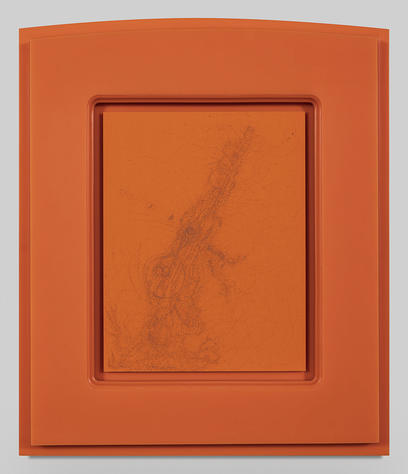 The show presents a selection of works that draw from the ritualistic and the process-oriented production that Barney embraces and mythologize throughout the film. The drawings in Embrasure, made with graphite and charcoal in the artist’s richly colored plastic frames, take the characters, sites, and iconography of Redoubt as points of departure into a world more ominous and strange. In these intricate drawings, Diana is rendered as a fierce deity, replete with tactical gear; Actaeon, whose mythical death is only a subtext in Redoubt, is here fully transformed and impaled on a burnt tree. Ornate fortresses of war allude to the military architecture that inspired this new project and its title; elevation maps are abstracted into feverish patterns. Barney’s fascination with the topography of Idaho is equaled here by a fixation on the celestial landscape, as the Lupus constellation – the wolf – appears in several drawings. 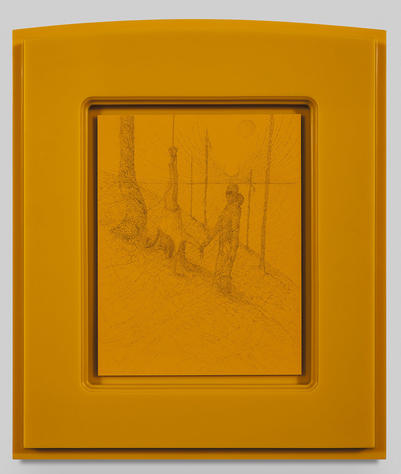 Barney also debuts a series of etchings that combine traditional printmaking processes with the electroplating technique developed in Redoubt. In this case, a network of copper is propagated through minute pores in the paper etchings, creating nodules that partially obscure the engraved lines. Throughout the series of works, we are presented with a sort of static conceptual environment countered by the images on-screen in Barney’s film. If we are to explore the art object as the dead material produced by the artist’s ritual, Barney seems intent on imbuing it with a sort of artifactual aura, turning the object not into an artifact by itself, but more significantly into an object that bears the legends of the time and space that created them.

This entry was posted on Wednesday, November 20th, 2019 at 12:54 pm and is filed under Art News, Featured Post, Go See. You can follow any responses to this entry through the RSS 2.0 feed. You can leave a response, or trackback from your own site.