New York – Jon Pylypchuk: “Waiting for the Next Nirvana” at Petzel Gallery Through February 29th, 2020 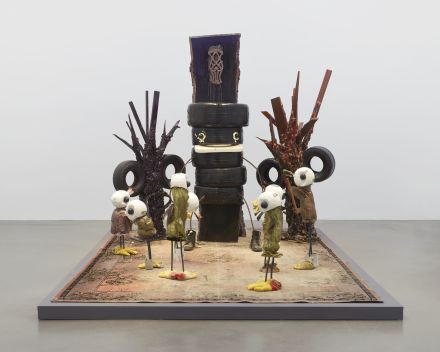 Jon Pylypchuk, Cast your empire on a kingdom of doubts (2019), via Petzel

On view in its Chelsea exhibition space, Petzel Gallery presents Waiting for the Next Nirvana, an exhibition of new paintings by Canada-born, Los Angeles-based artist Jon Pylypchuk. On view through the end of February, the show draws on his work as a musician, and as an artist, exploring concepts of nostalgia, anticipation, energy, confidence, and, foremost, seductive and rebellious emotion. 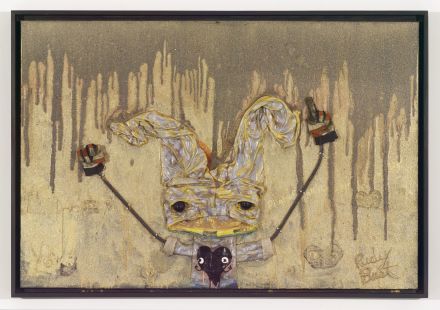 Pylypchuk’s works mine a specific language of cast-off materials, using fabric, wood, glue, watercolor, glitter, black cue balls, and polyurethane, among other materials, to evoke feelings of existential angst.  The show in particular dwells on the language of rebellion and its end game, the move towards establishment and careerism.  In the show press release, Pylypchuk alludes to Guns ‘N Roses, discussing the band’s move from defiant underdogs to industry behemoths, underscoring the effects of time on that same sense of youthful rebellion, and how its adherents change under the pressure of time.  “I don’t think mainstream rock music has been shook up, re-envisioned, made exciting again,” he says. 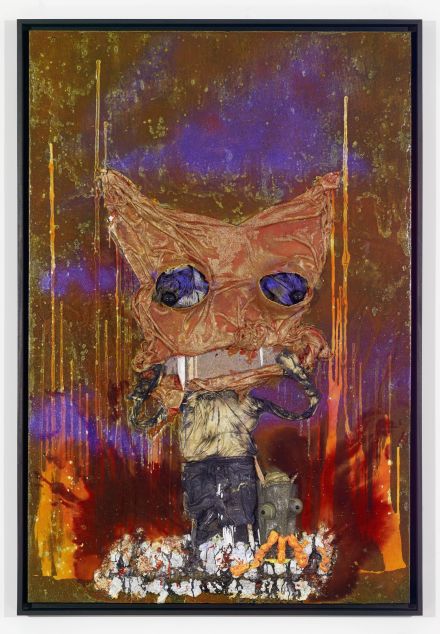 Jon Pylypchuk, Waiting for the Next Nirvana (2019), via Petzel

The result is a show that seems to tug at the threads of just what defiance and mortality are supposed to mean in the broader language of his work.  Pylypchuk’s characters seem to have lost their way, appearing in a wounded condition, harmed by either themselves or by others. They combine a hearty dose of cynicism and anger at the unfairness of it all with a wicked sense of survivalist humor.  Either in his sculptures or paintings, his characters, composed from hunks of cast-off material, seem to rest on the cusp of an apocalyptic landscape, conjuring somewhat familiar forms but twisted through the artist’s own lens. His characters rage at the viewer or twist their bodies into peculiar contortions and poses, locked into a dance of futility.  The idea of the gods of yesterday have faded from the language of Pylypchuk’s work, and in turn his forms must contend with their absence, a landscape without gods to rule over the masses. 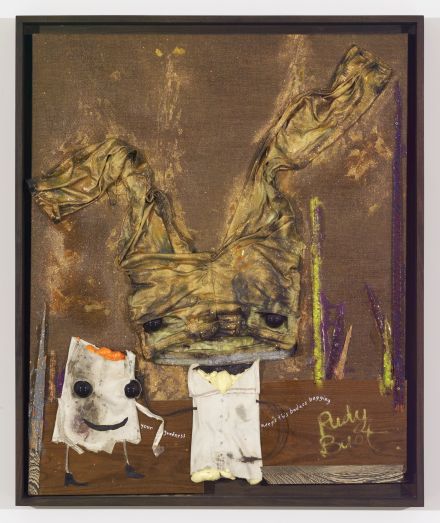 Jon Pylypchuk, The little spaces start to take their shapes (2019), via Petzel

This entry was posted on Tuesday, January 28th, 2020 at 12:42 pm and is filed under Art News, Featured Post, Show. You can follow any responses to this entry through the RSS 2.0 feed. You can leave a response, or trackback from your own site.