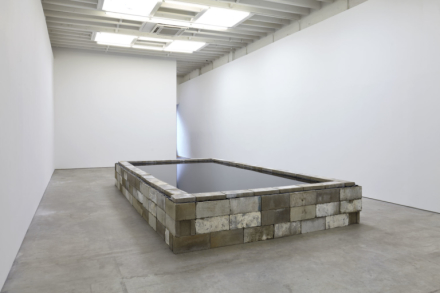 Artist Robert Grosvenor could perhaps best be described as an artist invested in space.  His interests rely not only on how the object exists within it, but equally how the space around an object twists and responds, moves and carves up space.  His sculptures capture a similar idea, pulling the viewer through their specific materiality and unconventional formal language that at one point might incorporate a distinct industrial materiality, while at others moving into a hard-edged, classic minimalism.  Each of the elements of this historical movement’s conceptual interests are there: heft and weight, density, scale, and even color, yet Grosvenor, more and more over the past years particularly, seems to take these principles and turn them towards the everyday, mining the language of the world around him to find new ways to ask similar questions . For his third show at Karma in New York, Grosvenor continues this particular interest in the realm between space and object, presenting a room-sized sculpture that the artist refers to as a “block of water,” as well as a collection of found and variously altered models of aircraft, watercraft, and automobiles. 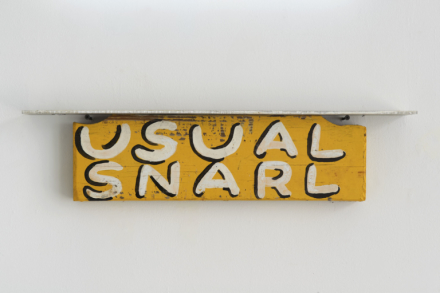 Grosvenor engages with everyday life in a manner of substitution and scale, reducing or enlarging, drawing on pieces and parts often ignored or left to the side, and here is no different.  His massive pool of water draws comparisons to a backyard pond, the product of hours of labor, yet here, inside the gallery, withheld from the elements.  A moment of total stillness dictates the appreciation of this work, yet there’s also a sense of the unreal that seeps into each piece. This massive reflecting pool seems to hint at bricks knocked astray, of a tight, minimalist form disturbed in some abstract way by the world around it, while his miniatures, upon closer inspection, seem to lean away from easy readings as specific models of planes or cars.  Some even appear as if they have been combined from a selection of random parts and pieces to create new forms, further subverting an easy reading of these pieces are readymade or sculpted objects. 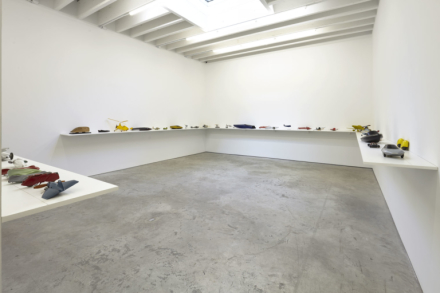 Grosvenor’s works give off a sense of the intentional and the staged, as a utility given usually to props, stage sets, and theatrical situations that have been precisely composed.  Here, he applies this towards a series of small scale models that mine a similar language to past investigations of cars and aircraft.  Presented here, the works seem stuck between their function as vehicles and studies in carefully rendered forms, gentle arcing curves and planar landscapes that mine and reposition the language of minimalism, as if the outside and the inside were bending space and form to reunite. 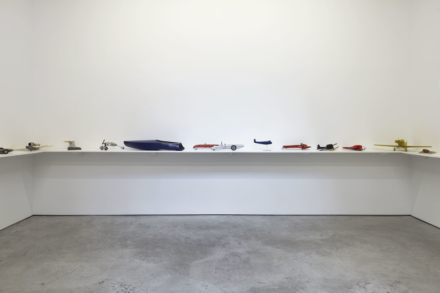 This entry was posted on Tuesday, February 4th, 2020 at 12:16 pm and is filed under Art News, Featured Post, Show. You can follow any responses to this entry through the RSS 2.0 feed. You can leave a response, or trackback from your own site.