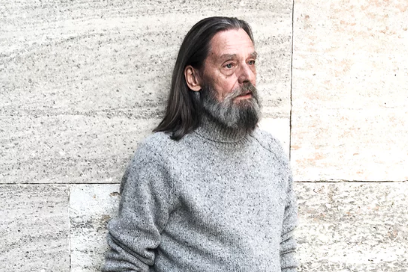 Performance artist Ulay has passed away after a battle with lymphatic cancer this week in Ljubljana, Slovenia, aged 76.

A longtime partner of Marina Abramovic, Ulay first achieved success with a series of works executed with Abramovic, often employing dangerous tensions and moments of endurance to approach a singular performative body.  In one famed work The Other: Rest Energy, the pair balanced their weight against a centered bow and arrow, which Ulay had drawn taught and pointed directly at Abramovic.

Ulay and Marina Abramović, via The Guardian

The pair would eventually go their separate ways, and Ulay would begin exploring a number of other projects, including large-scale photography, but he would end up suing Abramovic in 2015 over unpaid funds from their collaborative artworks.  The pair would eventually reconcile, and Ulay would surprise Abramovic during her piece The Artist is Present at MoMA, crying together after he sat opposite her.

Struggling with cancer in the past years, the artist nevertheless continued to practice, charting his decline in a piece that would become one of his final large-scale works.

This entry was posted on Monday, March 2nd, 2020 at 10:52 am and is filed under Art News, Featured Post, Obituary. You can follow any responses to this entry through the RSS 2.0 feed. You can leave a response, or trackback from your own site.