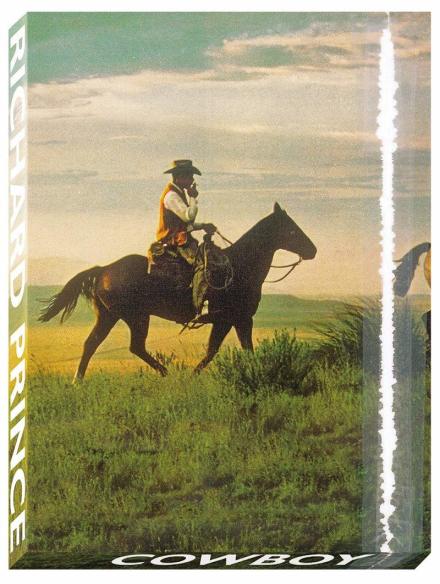 For decades, the American Cowboy has loomed large over Richard Prince’s body of work, from the iconic Marlboro Man images Prince reframed and showed during the 1980’s, on through a range of sculptural, photographic and digital works that explore both the artist’s singular subject, and a range of media the cowboy has appeared in. Such is the focus of Richard Prince: Cowboy, a near-exhaustive compendium of Prince’s work in the series, and a rosetta stone of sorts for dissecting both Prince’s broader body of work and the sheer scale of media devoted to the lone gunmen and cattle hands of the Wild West. Compiled and introduced by the curator and collector Robert Rubin, the book chronicles Prince’s evolving work in his varied series of Cowboys, serving in turn as an ad hoc history of the cowboy on screen and page, a legend still being built by the machine of American mass media. 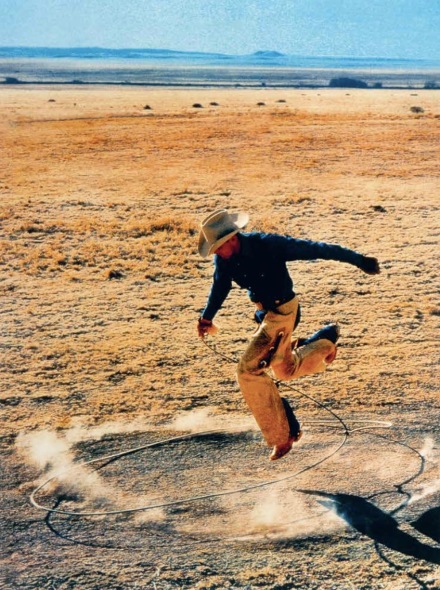 A Richard Prince Cowboy, via Prestel

Rubin allows countless threads and objects to intersect throughout the book, culling together images of books and objects, film stills, photographs and essays from Prince’s personal collection and his works documenting the varied forms of the Cowboy in American media, from his cropped Marlboro ads to his inkjet and paint embellishments of classic pulp covers, on to his more recent landscape photos.  In this loose, flowing series of interconnecting media framings, the book echoes the dense reference systems of Prince’s work, and ever-refracting codes of the modern image that he so often challenges and works through.  The Marlboro ads are a classic touchstone, but Rubin delves as well into Leonard McCombe’s photos for LIFE magazine, which seem to have been lifted clean out for Marlboro’s ad series.  Hollywood factors as well, and includes shots from classic Westerns like The Treasure of the Sierra Madre, HUD, and even Blazing Saddles, or the work and collections of writer Larry McMurty, writer of the western novel Lonesome Dove.

Rubin’s work is a fitting artist catalog for the internet age, and exceedingly so for Prince, an artist he positions as an early prophet of the digital age, exploring the countless touch points of the modern image archive, and the possibilities for multivalent, expansive systems of meaning in a recontextualized image.  The book is at turns a documentation of the artist’s archive, his work, and the endless troves of subject matter produced by American writers, producers, filmmakers and more.  His photos, works, and his massive collection of books are shown throughout; reams of cowboy pulp alongside his broader library, underscoring the sheer scale of his source material, his varied series and the convergences in theme and image, reality and fiction, image and world. 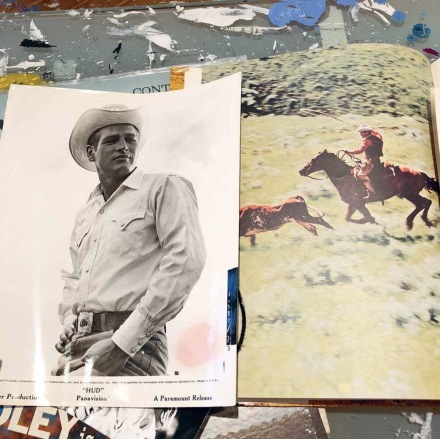 What’s perhaps more interesting are the ever-present reminders of the Cowboy as a primacy of myth over legend.  Throughout, the book takes great pains to emphasize the cowboy as a relatively short-lived phenomenon of a Western expansion that ended within a single lifetime, and a culture already decimated by the consolidation of ranching corporations over the last century.  That idea of a dwindling, long absent culture that has so many times been produced and reproduced on screens, pages, photos, etc. is rarely absent from the work.  The Cowboy is presented here less as the icon of American ingenuity and work ethic than as a tool of a massive media machine, haunting the annals of American history and legend with a world that barely ever existed.

Taking this sense as a core conceit, Prince’s work beyond his Cowboy is is provided ample ground to breathe and shine, the ideology explored in his first series branching out into his broader body of works, a mythology grown increasingly complicated by its constant revisions.  In one section, Rubin includes the story of writer Victor DeCosta, who sued CBS over the appropriation of his material for the TV series Have Gun Will Travel, then shows a photo of that same phrase emblazoned on a Vietnam-era army helicopter, that same cowboy mentality writ large against the backdrop of the American war machine.

Rubin seems to intuitively understand the deep time and endless echoing facets of Prince’s work across American culture, the violence and sexuality of its legends, and the images it produces.  Allowing the photos and stories to speak for themselves, the book serves as a powerful backdrop for Prince’s enduringly complex and exceedingly nuanced series of works.

This entry was posted on Thursday, April 16th, 2020 at 1:34 pm and is filed under Art News, Featured Post, Show. You can follow any responses to this entry through the RSS 2.0 feed. You can leave a response, or trackback from your own site.