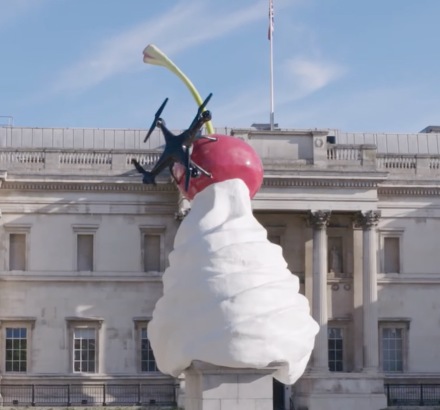 A riddle topped with a cherry, Heather Phllipson’s new sculpture installation on Trafalgar Square’s Fourth Plinth in London has all the makings of a work fittingly in line with the surreal progression of events that have marked 2020.  A massive dollop of whipped cream, topped off with a cherry, a large fly and whirling drone, the piece, titled The End, seems to invite questions of just what its title might imply: are we looking at the end of meaning, the end of the world, or perhaps just the end of a particularly large sundae? 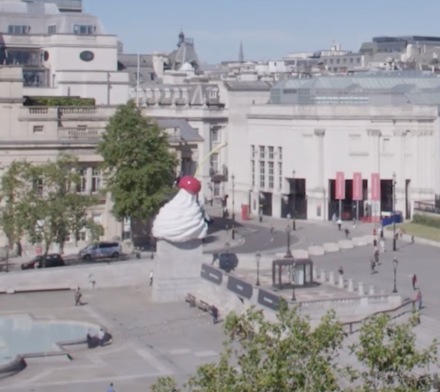 In any reading, Phillipson’s work is striking in scale and color, standing stark against skies of London,  and hints at a decay perhaps not immediately accessible at first glance.  The cream seems to be about to topped off the edge, as if melting in slow motion, and cherry, however red and appetizing, seems under threat from the climbing fly.  It’s a series of tensions constantly in renegotiation and elaboration, a work that seems to presage the daily tension of a world still working past the throes of a pandemic, and the varied responses globally that seem to exacerbate already fraught relationships and affiliations.   “For me, we’ve been at a point of some kind of entropy for a long time, she tells The Guardian. “When I was thinking of this work there was a sense for me of an undercurrent that was already there … this feels like a continuation of that.” 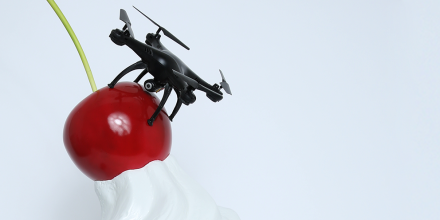 Heather Phillipson, The End (Model), via City of London

When conceived, the piece was thought up as a marker, delineating the space of Trafalgar Square in its central London locale as a site of political evolution and congregation, a meeting place of various ideas and concepts of the British nation and the world that is still in flux.  With the rampant protests worldwide over racism and police violence, Phillipson’s sickeningly sweet piece, topped off with its own ominous notes of technocratic power and decay, seems a fittingly apt note for a year of turbulence and change.

The artist’s work will remain on view for the next two years.

This entry was posted on Monday, August 3rd, 2020 at 8:02 pm and is filed under Art News, Featured Post, Show. You can follow any responses to this entry through the RSS 2.0 feed. You can leave a response, or trackback from your own site.