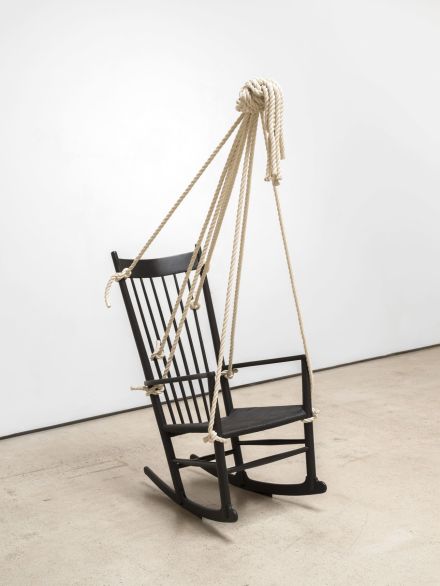 Currently on view at David Kordansky in Los Angeles is BORROWED SCULPTURES, an exhibition of new floor- and wall-based bronze sculptures by the Australian-born artist Ricky Swallow.  Continuing the artist’s enigmatic explorations of bronze sculpture and its relationship to the materiality of the everyday, the show mounts a body of works that walk a peculiar line between manufactured sculpture and readymade. 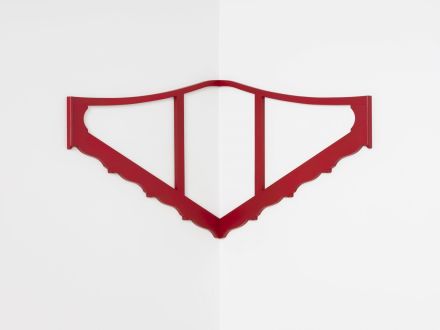 Swallow practice often revolves around transforming familiar objects and materials into bronze sculptures that challenge ordinary perceptions of space, mass, and color, a note he returns to in this new series of works.  The included forms, among them several apparent readymades, are here turned towards the tension of material and image, the material intervention and repurposing that dictates so much of sculpture in general.  Rocking Chair with Rope (Meditation Chair #1), for instance, continues a long-running series of investigations into the space and proportions, with the chair subtle altered from its original cast, and then turned away from its original form and function through the inclusion of the twisted snares of rope binding its body.  Each step is a relinquishing of the object’s previous iteration, a subtle series of subtractions and additions that are almost imperceptible in the work’s final form. With the chair resting solidly on the floor and the ropes pointing upward to the sky, the finished work is poised between the metaphysical and the earthbound, the ideal and the actual. 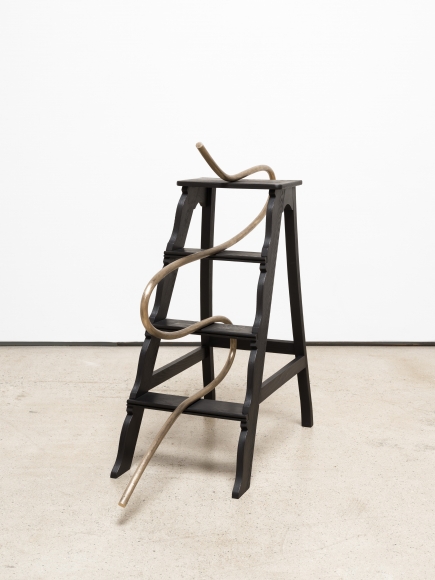 Another work, Stringer, makes its case around concepts of internal movement and sustained tension.   A wall-based sculpture produced from a cast of a twisting length of rope, the piece has been gathered into the silhouette of a stair stringer, a template used by builders to facilitate the construction of stairways, and therefore to negotiate a transition from flatness to dimensionality. Organic and fleshy on the one hand, the work also functions as a kind of linear drawing as the eye attempts to follow the course of the rope throughout its total shape. The play between two and three dimensions suffuses it at every level, from concept to final execution. 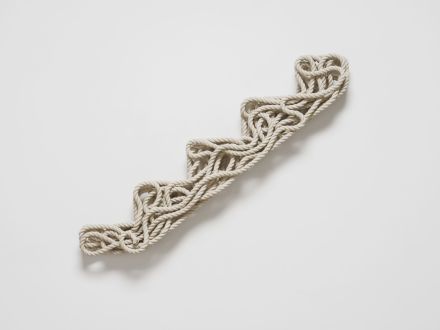 BORROWED SCULPTURES is defined by Swallow’s propensity for locating forms in the domestic and studio environments that, when taken apart and recontextualized, pivot their way into dialogues about modernism, minimalism, and the experience of architectural space. Mirrored A’s (hinged), a wall-based corner sculpture, consists of cast bronze parts from a deconstructed step ladder. Treated with a red patina, the object’s deeply saturated coloration enhances its function as an unknown symbol or mysterious glyph, even as the wood grain maintained on its surfaces keeps its connection to the original ladder intact. 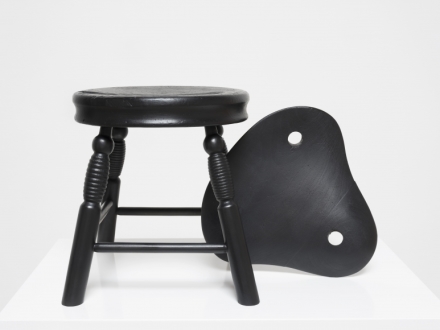 Throughout, objects seem to emanate psychological charge and come alive from the inside out.  But the exhibition also poses questions about the way that furniture objects, like props waiting for a performance, evoke the presence of the bodies that might eventually use them. In this respect, the works in BORROWED SCULPTURES are part of a conceptually oriented discourse that has animated contemporary art throughout the postwar period.  Allowing his forms to walk the line between function and reinvention, Swallow’s show is a playful and engaging entry in his body of work.

This entry was posted on Monday, August 10th, 2020 at 11:48 am and is filed under Art News, Featured Post, Show. You can follow any responses to this entry through the RSS 2.0 feed. You can leave a response, or trackback from your own site.