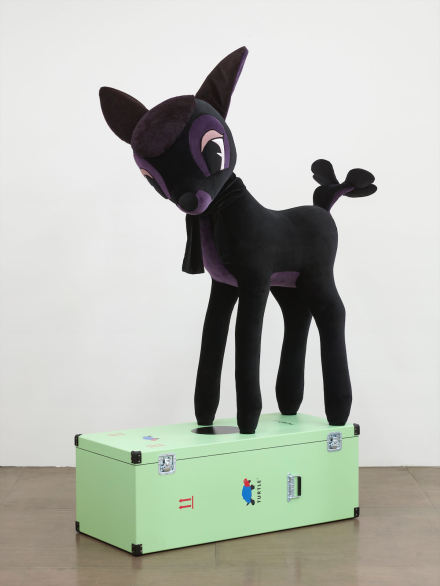 Returning to Los Angeles for a second show with GAGA and her first in the gallery’s LA space, artist Cosima von Bonin has installed a body of new works, merging together her signature selections of pop cultural iconographies, material inversions and surreal interpolations of the gallery space, united under the title HETERO.  Using the gallery as a framework on which to explore and elaborate her unique formal investigations, the artist explores the idea of extended, and often distended, narrative flows. 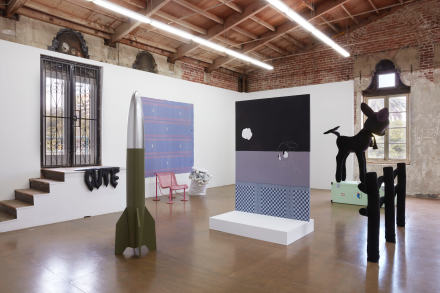 The show beings this narrative arc through a series of meditations on color and iconography, using specific series of colors and forms as a way to mount her typically madcap arrangements.  Massive fabric fences contend with military warheads, or in the show’s titular work, a large stuffed deer resembling Disney’s Bambi stands atop a trunk case, towering over the viewer as if presiding over the gallery.  Faded seafoam greens and greys dominate the exhibition, as do the references to Bambi (in a series of works, the artist depicts a rendition of Thumper). 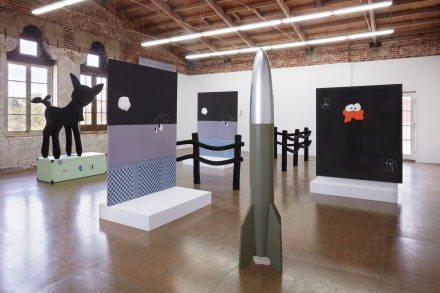 As one enters the gallery, they are immediately greeted by LOVE/HATE, a towering panel adorned with those two words, behind which hides a secret smoker lounge, complete with light-up neon cigarette that serves as an anteroom to the rest of the exhibition.  Staged as a series of “rooms,” the exhibition turns Von Bonin’s conception of the gallery into a flowing, imaginative whirlwind of color and symbol combinations.  Her allusions to military and cartoon iconographies alternate quickly, and their separation by the sad face of Thumper on a series of screens emphasizes the sense of architecture and movement throughout.  It’s emphasized in the show materials that the space walks a fine line between a house of horrors or a fun house, but the show equally seems to present a sort of reflection of the psyche, a series of caricatures for the body and mind, impulse and perception, tied up in cultural imagery that gives the show an intimidatingly direct air. 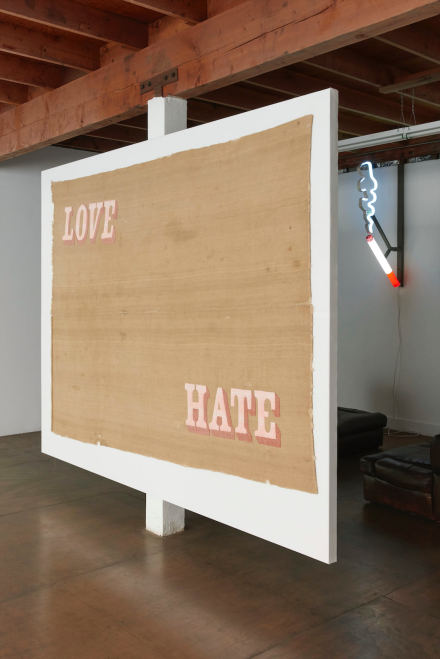 The result is a space where the weaponization of culture, and the sublimation of violence become tied together, and their shared space here creates increasingly strange and intriguing questions.  Perhaps the most enduring: how do we leave?

The show has been extended through September 26th.

This entry was posted on Thursday, September 17th, 2020 at 11:32 am and is filed under Art News, Featured Post, Show. You can follow any responses to this entry through the RSS 2.0 feed. You can leave a response, or trackback from your own site.