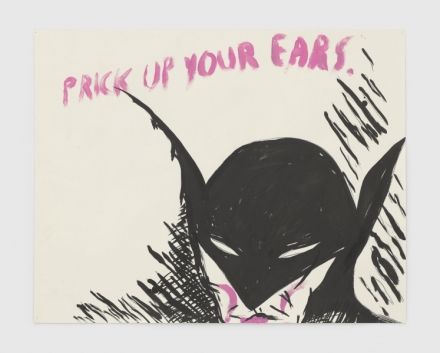 Raymond Pettibon, No Title (Prick up your) (2020), via Regen Projects

For its fall exhibition, Regen Projects has tapped the voluminous body of work produced by Raymond Pettibon, presenting a range of new drawings and collages by the artist to round out his 11th exhibition with the gallery since joining in 1993.  Uniting his various interests in literature, sport and art, Pettibon’s most recent selection of works continues his investigations into the landscape of modern culture. 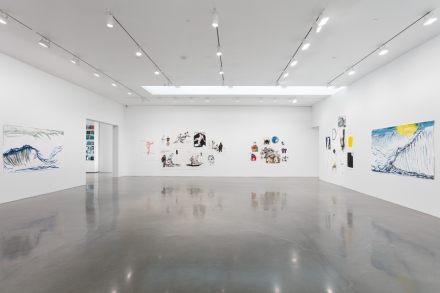 Pettibon’s distinctive style combines pen and ink figuration with hand-inscribed text and collage elements to create incisive works that probe the deeply embedded dualities of American culture,  drawing in particular on a vast range of sources and influences that seem to offer a swirling commentary on the last 6o-plus years of American history and culture. Everything from comics, world history, American politics, and baseball to film noir, literature, and surf culture all coalesce in a lyrical rapture of meanings and framings, all unified by a direct and unfiltered aesthetic styling that allows his quickly executed and often challenging textual prompts to confront the viewer.  At first appearing crude, his works rely on his immense backlog of signifiers, creating an interplay that has made Pettibon’s work an emblem of countercultural disaffection. 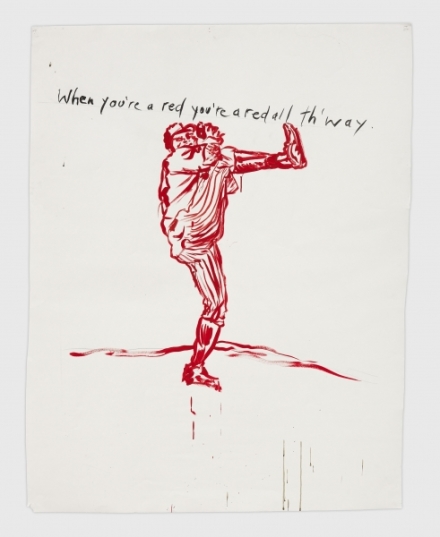 This exhibition of new drawings and collages welcomes back familiar characters and motifs such as Gumby and his horse, Pokey, Batman and Superman, Hollywood actors, dogs, baseball players, and gangsters. Also featured are new ‘wave’ paintings by Pettibon, whose longstanding fascination with surf culture has grown into an iconography unto itself. Other prevalent motifs include racehorses and jockeys, which stride alongside tokens of Antiquity, mythology, and Classical architecture. Pettibon presents this latter set as decaying, delinquent, and over-sexed, a dilapidated reality that presents a dilemma to scenes of Western triumph — mostly snide but occasionally wistful — that are grouped among them. 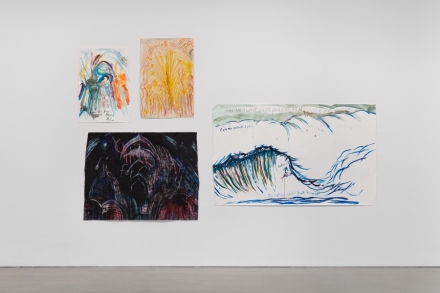 This selection of images contends, too, with constructs of modern art. Letters and punctuation are the subjects of several works, which Pettibon presents absent of context.  Throughout, one is exceedingly aware of an outsider, long aware of his presence looking in on the art world, now on the inside looking out.  The sense gives his work no less a sense of urgency.

This entry was posted on Monday, October 26th, 2020 at 12:46 pm and is filed under Art News, Featured Post, Show. You can follow any responses to this entry through the RSS 2.0 feed. You can leave a response, or trackback from your own site.