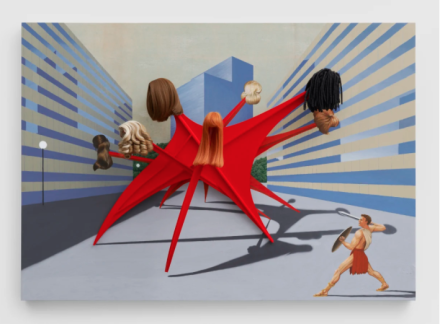 Jim Shaw returns to Simon Lee Gallery this month for a show of new works in London, continuing the artist’s incisive and often comical adaptations of recent events, comic book iconographies and the last 75 years of American history. 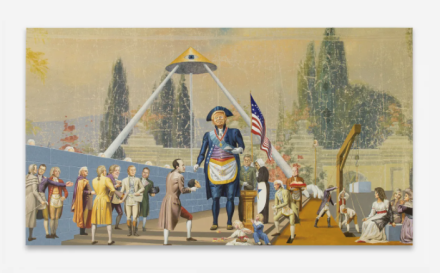 Shaw is celebrated for the outlandish narratives and sharp wit, applied to a series of dystopian, albeit eerily familiar, tableaux that challenge and reshape the viewer’s impressions of politics, culture and history. His pieces are provocative, often sinister or comedic, or somewhere in between, and pieced together from the artist’s own imagination and his prolific collection of magazine and newspaper cut outs, posters and prints, comic books and gimmicky advertisements, which he began collecting during his teenage years in Michigan in the 1960s. Constructed through his unique lens on esoterica, conspiracy theory, popular culture, and his own fictional religion Oism, his paintings demonstrate Shaw’s fearless desire to tell of an alternate reality, one in which ill intention, conspicuous consumption, gross wealth and corruption are met with consequences. Societal ills are exposed, although the question of whether aspiring to a more transparent future is fool’s paradise remains unanswered.

Jim Shaw, Donald and Melania Trump descending the escalator into the 9th circle of hell reserved for traitors frozen in a sea of ice (2020), via Simon Lee

For his most recent show, the artist draws on the fraught political landscape of contemporary America, which offers no end to the possibilities and potentials for lampooning and deeper explorations of tyranny and power, decline and dystopia.  In new acrylic works on muslin, retro home appliances hark back to the post-War promise of the production line, despite their redundant use-value in this context, while politicians and notable public figures are disfigured by the representational effects of their own auras.  Trump, long a target for peculiar inversions and mutilations in Shaw’s canvases, returns here, presented alongside his wife, Melania, and descending an escalator into Dante’s Ninth Circle of Hell to find a group of traitors, some of them discarded former aides, frozen alongside Satan in a sea of ice. Shaw’s monsters and villains, whether real or fictional, are larger than life; ultimately, these paintings convey a sense of vicissitude that is reflective of the country’s ever-shifting socio-political landscape. 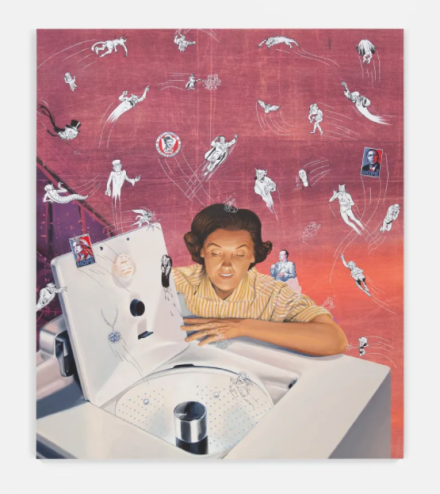 Shaw’s practice has always been inherently ‘American’, imbued with national references and critiques, some contemporary, others historic and now deeply embedded into American culture. In these latest works – painted over found theatrical backdrops, with some featuring subtle sculptural elements – produced during a time of constantly evolving political, social and economic polarity, Shaw plays on oppositions: alluding to past events in service of urgent commentary on our fraught present and blending fiction with reality in order to highlight the fantastic state of contemporary American life.

This entry was posted on Tuesday, November 3rd, 2020 at 12:00 pm and is filed under Art News, Featured Post, Show. You can follow any responses to this entry through the RSS 2.0 feed. You can leave a response, or trackback from your own site.