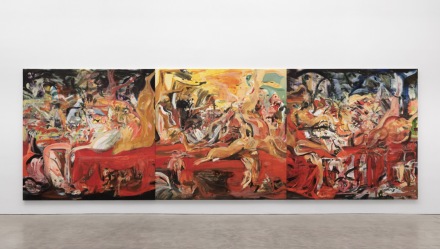 Currently on view at Paula Cooper’s 26th Street Exhibition Space, artist Cecily Brown has brought forth a striking body of new paintings, continuing her unique exploration of the liminal spaces between abstraction and figuration.  Across a range of works exploring a rich color palette of warm polychrome hues and deep black, Brown’s work demonstrates a prolonged exploration of color’s potential to fill in this space between modes of depiction. 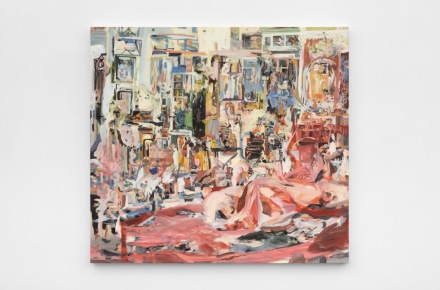 Transcending classical notions of genre and narrative, Brown’s work draws from a wide range of art-historical motifs and contemporary references, often building her compositions through a range of impassioned brushstrokes and compressed depths of field.  The result is a body of work that seeks a sense of prolonged energy, never settling the work’s energy around immediately familiar images or iconographies. Instead, a certain sense of flow and movement dominates the works on view. 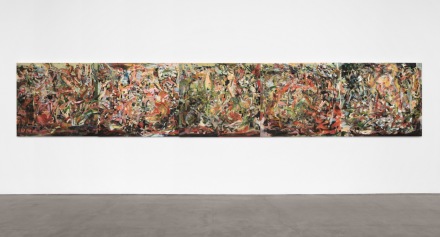 Cecily Brown, of nothing something still (2020), via Paula Cooper

Produced mainly in the spring and summer of this year, the pieces take on a distinct sense of urgency and immediacy, particularly her easel-sized Bedroom Paintings, intimate, direct works that mark a distinct shift in tone from prior pieces. Depicting interior scenes of individuals or couples in erotic entanglements, the series introduces impassable straight lines and hyper-dense brushwork—suggesting a disquiet that belies their domestic subject matter and soft pastel hues.  The pieces are an exploration of bodies in space, but equally of the movements and materials that equally dictate how that space is understood.  Juxtaposed with her earlier large–scale works, Brown’s Bedroom Paintings offer a world that is closing in on itself.

Other works in the show draw on her interest in grand scales and the work of seventeenth-century Flemish master Frans Snyders. The Splendid Table, for instance, echoes the abundance of fruit, objects and dead game seen in Snyders’s nature mortes. Staged over an expansive crimson tablecloth, Brown’s wilting carcasses of geese, rabbits and deer seem to sporadically ignite across the canvas—gesturing toward the vitality of sport hunting and sybarite worldly pleasures, yet the flurry of brushstrokes and energy of her images dawn the works into a negotiation on just what constitutes “still life.”  Another work, The Demon Menagerie, plays on Snyders’s concert of birds paintings, using his imagery to create a space split between paradise and hell through Brown’s particular mode of depiction and exploration.  Using digital printing to produce four copies of one of her own paintings, Brown returned to both the original and printed canvases, working on each separately as well as side-by-side. The end result are a series of variations on a theme, a new mode of movement and space as defined by the artist’s own hand.

This entry was posted on Monday, November 16th, 2020 at 12:00 pm and is filed under Art News, Featured Post, Show. You can follow any responses to this entry through the RSS 2.0 feed. You can leave a response, or trackback from your own site.