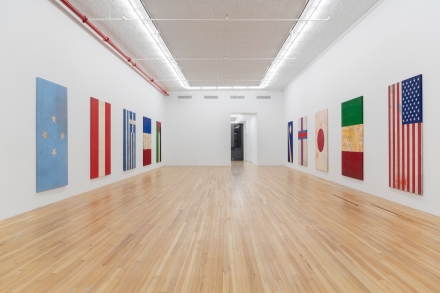 Artist Fredrik Værslev operates at an intriguing intersection of formalist and minimalist concepts, drawing on cultural signifiers, semiotic assumptions and linguistic fragments to explore the edges of painting, that space where the canvas becomes a stand-in for something larger than just a picture.  For his most recent show at Andrew Kreps Gallery, the artist continues that practice with World Paintings. 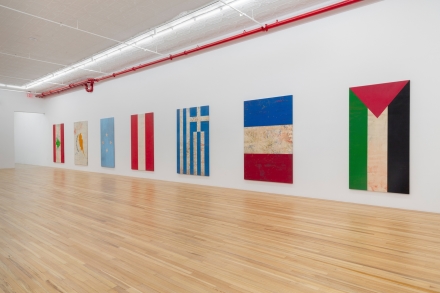 In his essay accompanying the exhibition, Dieter Roelstraete writes: “For all its obvious relevance as a sustained meditation on the vagaries of globalization in these challenging times of worldwide anti-globalist backlash, World Paintings is above all a reflection on the act, and art, of painting. Indeed, if the problem of so much “flag art” (think of every US flag masquerading as a work of art or showing up inside a work of art since Jasper Johns’ Flag) resides in the fact that most of the time we only ever see the flag, and rarely the painting – that the flag inevitably always ends up obscuring (“trumping”) the painting.” 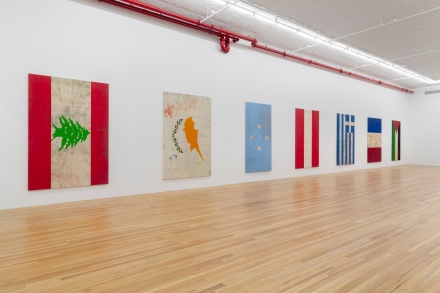 At its core, the show presents a series of flags, graphical exercises by Værslev that re-create the political standards of countries the world over, and operate on a similar principle to a readymade, incorporating the cache of implications and concepts that populate each of the works on view.  Flags for a range of countries are presented, with details meticulously re-created.  Yet the works also bear the marks of their construction, swirls of color and marks on the surface that trace the painter’s body operating against the creation of these works.  Rather than present works that remove all human presence from the surface of the piece, Værslev’s work emphasizes his own presence. 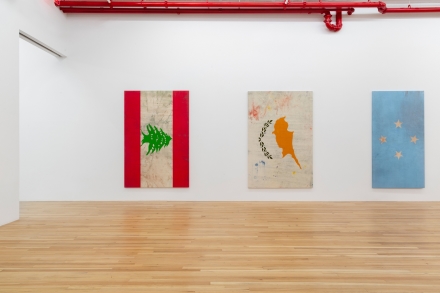 Much in the same way that Johns’s flag drew the concept of American ideology into close focus with his work, Værslev turns this same concept towards the world itself, the American project fading into the landscape of the world at large.  However, as mentioned above, his piece equally points to the human effort buried under the surface of these colorful generalizations.  In the same way that minimalist works reduce the canvas to the frame and the space within it, Værslev seems to point towards the flag as a reduction of the humans contained within its bounds, and labors here to make them particularly present once again.

This entry was posted on Thursday, December 17th, 2020 at 1:11 pm and is filed under Art News, Featured Post, Show. You can follow any responses to this entry through the RSS 2.0 feed. You can leave a response, or trackback from your own site.