Currently on at Night Gallery in Los Angeles, artist Anna Rosen has brought forward a series of new fresco paintings, marking her second solo show with the gallery. Mining a particular juxtaposition between the language of modern art, and a deconstruction of the language of that era in art history, Rosen’s pieces are a colorful and enigmatic reinvention of its tenets. 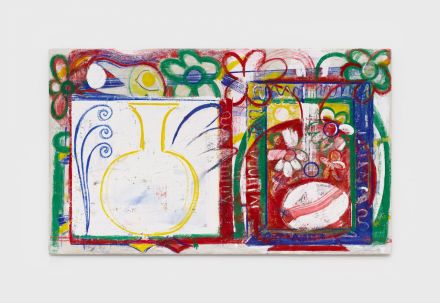 The frescoes on view are presented as an accumulation of gestures and movements, a symbolic order built through painterly wordplay and a complex reference system that delights in subversions and disguises.  Elements are concealed or suddenly unveiled, with vessels, frames, and costumes recurring throughout, creating a subtle narrative arc that suggests unseen (perhaps unseeable) truths, carried into being by illusory exteriors, or perhaps a parallel world emerging from this increasingly layered series of meanings and movements.  Rosen’s new work builds up imagery in layered constructions that repeatedly reorient the picture plane, painted onto limestone surfaces, which the artist lays like cement, to become facades of facades, finding a new layer of veneer behind every surface. 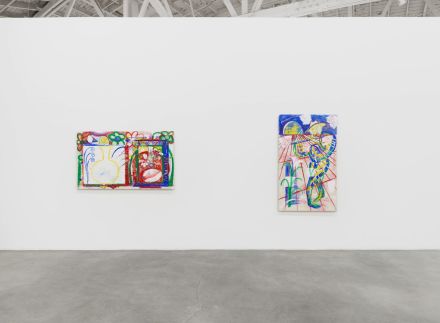 The show mines a unique space between states, architectural gestures unified with the language of classic portraiture or craft objects.   Limitations, like her use of an extremely minimal palette of mostly primary colors, for instance, push the work beyond its signifiers, seeming to push the compositional notion of mixing to an extreme state.  These are pieces functioning as a deconstructed chromatic scale, a set of figures set against each other in each monochromatic interrelation.  Rosen’s work playfully incorporates passages of white limestone on the top surfaces of her compositions, reminding the viewer of another binary, between substance and absence. 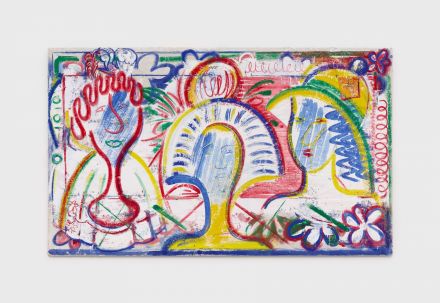 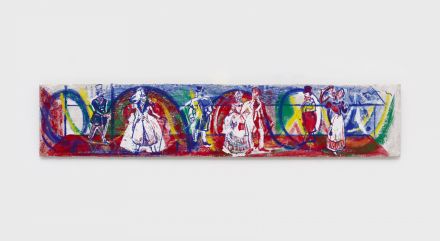 The result are pieces best described as paradoxical maps, deceptively spirited compositions that overlap embellishments toward a contemplation of meaning, while using their reference systems and structures to build a deeper understanding of both historical context and psychological convergenes. Setting up the tension between adornment and essence, Rosen reframes decoration as a site of philosophical inquiry. Her symbols are, on the one hand, self-negating, sites of falsity and diversion; on the other, they are sites of creation, enshrining and carrying forward a human story.

This entry was posted on Friday, January 8th, 2021 at 12:39 pm and is filed under Art News, Featured Post, Show. You can follow any responses to this entry through the RSS 2.0 feed. You can leave a response, or trackback from your own site.