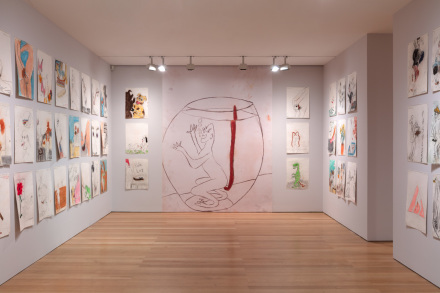 On view now at Flag Art Foundation in New York, Nicole Eisenman has but a show together with illustrator and painter Keith Boadwee, combining their uniquely spirited approaches to the body and to its modes of depiction across a range of subjects and scenes. The show, mixing each artist’s approaches, is on view now through March. 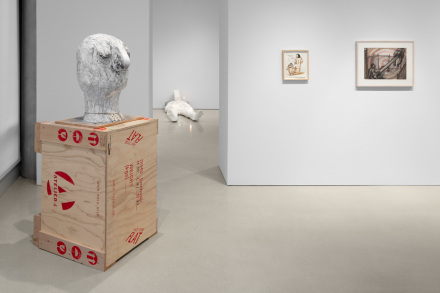 Eisenman employs a plurality of styles and visual references in her drawings, paintings, and sculptures to give shape to the many forms of the human condition. At FLAG, her cast of characters are emblematic of the patriarchy—frat guys, paunchy businessmen, and bald eagles—the foundations of which she gleefully undermines through absurdity, caricature, and gallows humor. Similarly, Boadwee’s drawings, often drawing on abject subject matter, seems to echo and enforce the tropes established in Eisenman’s pieces. Installed en masse, Boadwee’s works depict a near infinite variety of scatological scenes that assert one’s agency over their body, its functions, messiness, and pleasures. 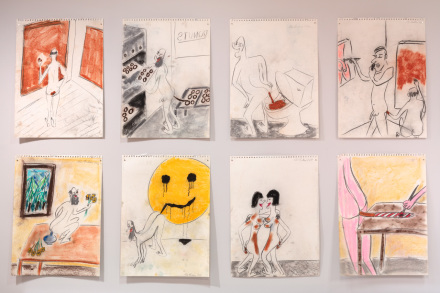 What unites the works, beyond their long friendship, is a mutual exploration of representations and sensations that challenge conservative, heteronormative notions of cleanliness, decency, and identity. Boadwee in particular, who has long explored the body in relation to critiques of art and its production, in some wroks expelling paint from his own orifices on to canvas.  At FLAG, his drawings are presented in grids, vitrines, and wall-sized vinyls and feature a multitude of characters engaged in absurd situations. Ranging from the everyday to the fantastical to the overtly political, Boadwee’s scenes overwhelmingly employ slapstick humor to diffuse, confront, and demystify this inescapable and universal bodily function. 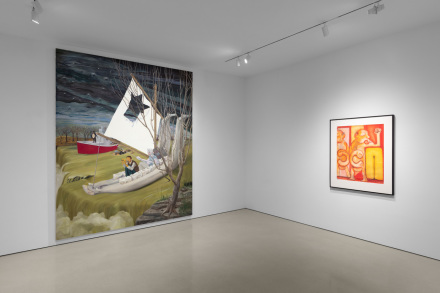 Taken together, and unified by the large canvases by Eisenman in the back room, the works become a constellation of bodily vectors and forces, positions and poses orchestrated to create an elaborate series of criticisms of the male body and its modes of perception and practice.

This entry was posted on Friday, February 12th, 2021 at 12:03 pm and is filed under Art News, Featured Post, Show. You can follow any responses to this entry through the RSS 2.0 feed. You can leave a response, or trackback from your own site.