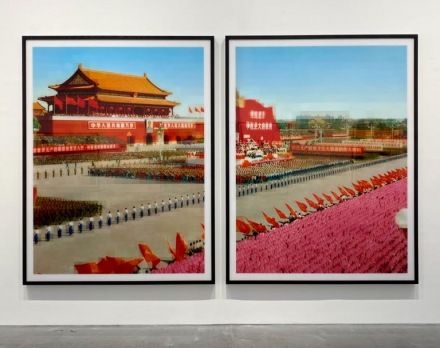 Currently on view at David Zwirner’s Paris location, artist Thomas Ruff is presenting a series of recent works and historically significant works exploring his ongoing interest in propaganda photography and the critical deconstruction of images. 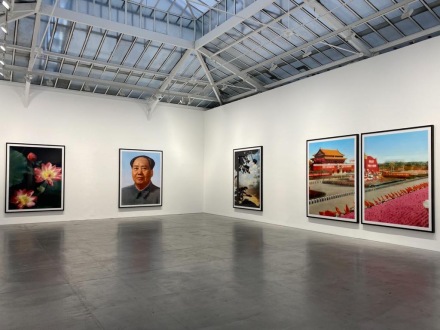 Ruff’s tableaux chinois arose out of his long-standing interest in the genre of propaganda photography—inherently at conflict with the medium’s mimetic capability as it presents an ideologically inflected version of reality, and sees him return to his interests in the deconstruction and critique of of the image as an often fabricated reality.  Exploring both analog and digital modes of depiction, his work draws on propaganda as a site of operation.

In the early 2000s, Ruff came across a coffee table book on Mao Zedong that grandly valorized the Chinese leader’s life and achievements, and became interested in Mao not only as a political figure but also as a cultural reference point, depicted by a range of Western artists—most notably, Andy Warhol. Ruff subsequently purchased a group of La Chine magazines—the French iteration of a periodical that the Chinese Communist Party produced specifically for Europe and distributed in several Western languages from the late 1950s through the 1970s as a means of demonstrating the advantages of Communism. Ruminating over this material for several years, the artist considered China’s unique position in relationship to the West as a country that is technologically advanced but simultaneously ideologically regressive, and began to devise a way to embody this dichotomy within a single image. 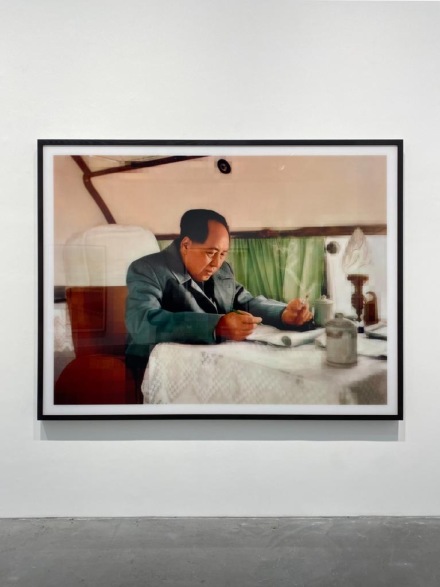 The result are a series of works that draw on his already established interest in the “grammar of photography,” using extreme variation of technical means to produce his series, ranging from anachronistic devices to the most advanced computer simulators and covering nearly all ground in between.  To create the works on view here, Ruff begins with imagery scanned from these publications depicting smiling soldiers, scenic views, ceremonial gatherings, and Chairman Mao himself, among other subjects, enlarging them considerably to reveal the halftone dots created by the offset printing process. He then duplicates the image and converts the offset halftone of the duplicates into a large pixel structure. As a next step he places the new images, which have a digital image structure, as a second or third layer over the original scan, and then selectively removes parts of the second or third level. The resulting new image thus has both the halftone of the “analog” offset printing and the “digital” structure of the pixel image—at once laying bare both twentieth- and twenty-first-century techniques for the creation of propaganda images. 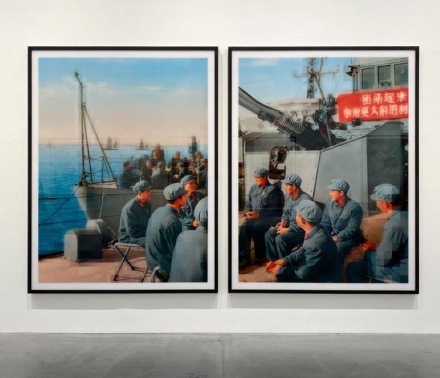 The end image structures the experience of viewing as both inherently layered, and bound up in an intriguing series of reference systems, always subjugating the viewer’s experience to the awareness that the image they are viewing is both a constructed scene, and technically, an abstracted one as well.  Ruff problematizes the surface of the work, allowing only the vision of the world as it’s “intended” to be seen.

This entry was posted on Thursday, February 4th, 2021 at 12:00 pm and is filed under Art News, Featured Post, Show. You can follow any responses to this entry through the RSS 2.0 feed. You can leave a response, or trackback from your own site.