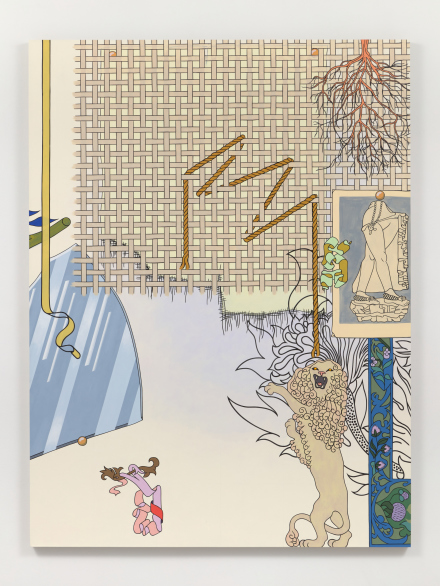 Painter Caitlin Keogh‘s works are orchestrations of symbolism, blending together a range of images and patterns that give the final composition a dizzying series of touchpoints, and ultimately arrive at a final composition that seems to rarely rest on any single image. Such is the case with her new show of works currently on view at Overduin and Co. in Los Angeles, a selection of pieces that emphasize shifting grounds and a composite sense of reality. 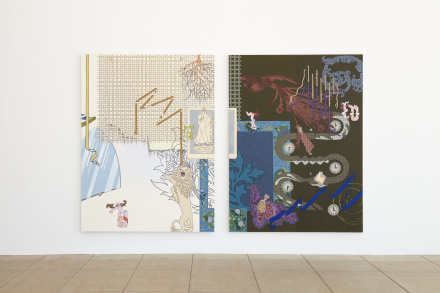 The process of composing these continuous paintings was informed partly from reading Mondrian’s writings, according to the artist. The painter was insistent on the canvas as being an urgent and vital plane, a sort of game board with which to test out rules for a vision of utopian equilibrium, as if the compositional rules and corresponding freedom offered a space in which perception and knowledge could be given new frameworks and forms. Yet while Mondrian dwelled on the canvas as a grid, and turned it towards an elaborate series of primary colors and interlocking structures, Keogh reintroduces graphical content and potentials for new stories to be woven in and out of the framework.  “The edge of the canvas is the restraint that imposes narrative and hierarchy onto the picture plane if composing a picture with recognizable ‘things,'” the artist writes, “and therefore was a liberating restraint to remove.” 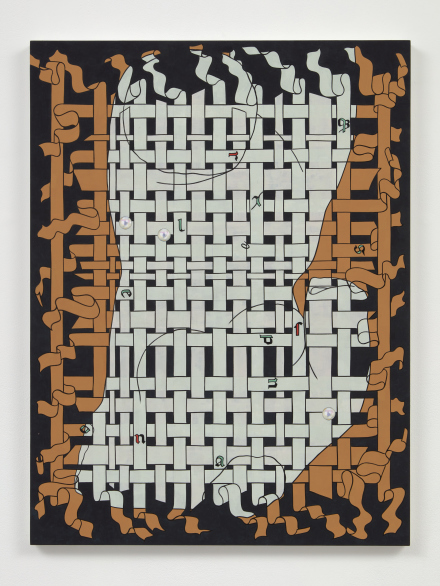 Weaving and the ever-present notion of “canvas” is noteworthy here, the idea that the artist has twisted and turned each of these graphical structures, in relation to the canvas itself, into a shifting landscape contained in two-dimensions. This sense is regularly driven home by thatched patterns, hard-edged lines, and intersecting grids, always disrupted again by the presence of trees, animals and human forms. This sense of a world reduced to structures and symbols abounds, and makes for a fascinating experience of Keogh’s work as an experiment in grammar and language.

This entry was posted on Tuesday, March 16th, 2021 at 12:00 pm and is filed under Art News, Featured Post, Show. You can follow any responses to this entry through the RSS 2.0 feed. You can leave a response, or trackback from your own site.