Over the past two decades, few artists have taken such a continuously engaging pathway through the history and culture of digital media in all of its forms in the same manner as Cory Arcangel.  Hacking into the systems and software that define our networked lives, he introduces glitches and misfires that reveal the perils of technological dependence. For his debut solo exhibition at Greene Naftali, he continues this practice, amplifying and enhancing themes he has honed over two decades, using the structures and social mores of digital platforms as his primary artistic material.

Featuring both real-time and recorded media interventions, works on paper and riffs on painting, the exhibition centers on his most ambitious work to date: a live feed of a custom computer navigating the videogame Kim Kardashian: Hollywood, using machine learning—intended to streamline performance—toward more ambivalent ends. The player’s goal is to increase their fame and reputation, to use the mechanisms of the entertainment industry to become an A-List celebrity, yet Arcangel’s operating system fumbles its way through this ersatz version of suburban Los Angeles. The work’s layered visuals comprise the flattened graphics of the role-playing game itself, an array of colored boxes the algorithm uses to identify what it encounters, and scrolling lines of code that correspond to the program’s automated progress, with in-game sounds composed by the musician Daniel Lopatin (Oneohtrix Point Never). /roʊˈdeɪoʊ/ Let’s Play: HOLLYWOOD recalls the modified game cartridges that marked Arcangel’s early career, but the use of artificial intelligence expands the scope of those prior interventions—here the game has been repurposed in ways that even the artist does not control, and the outcome of play cannot be known in advance. The work’s hypnotic effect turns ominous if one contemplates the endless reserves of data that clutter the screen, and the urge to optimize the pursuit of fame for its own sake. 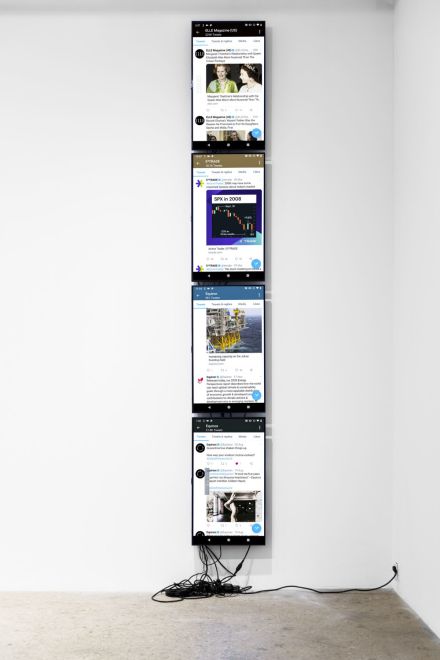 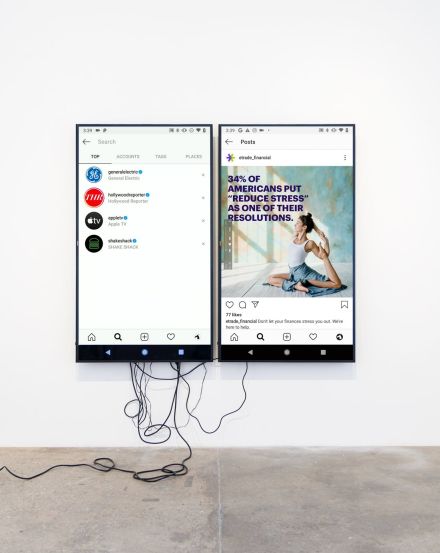 Bots and algorithms dominate the rest of the works on view in the gallery as well. In elleusa, equinor, equinox, etrade_financial, a bot trails through a range of corporate accounts, ‘liking’ every post with a sense of reckless enthusiasm. Mirroring the bland corporate character of these posts with additional, fake traffic, Arcangel’s works play into, and amplify, the surreal experience of manufacturing, and marketing, personas online. 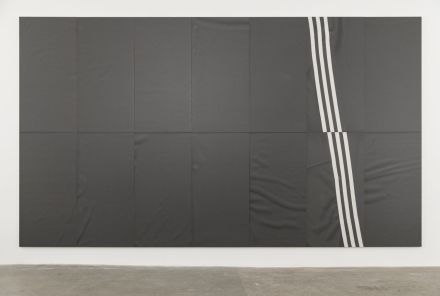 The also features a series of the artist’s Flatware pieces, wall-mounted reliefs made by transferring images of scanned textiles onto Ikea tabletops. Here the fabrics all come from sweatpants—both iconic brands like Adidas and no-name dollar-store fare—in works that reference the global ubiquity of athleisure and big-box stores. Challenging the notion of painting in the digital landscape, and perhaps more broadly, the act of producing physical objects in a post-consumer landscape, his works here make for an increasingly playful, and joking, proposition.

This entry was posted on Wednesday, March 31st, 2021 at 12:51 pm and is filed under Art News, Featured Post, Show. You can follow any responses to this entry through the RSS 2.0 feed. You can leave a response, or trackback from your own site.