New York – Arghavan Khosravi: “In Between Places” at Rachel Uffner Through June 5th, 2021 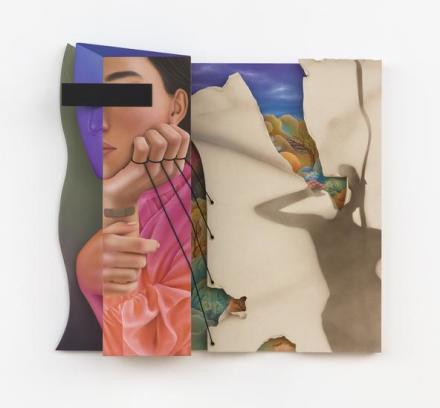 Arghavan Khosravi, On Being a Woman (2021), via Rachel Uffner

Curently on at Rachel Uffner in New York, artist Arghavan Khosravi’s marks her first solo exhibition at the gallery with an impressive selection of new works building upon previous explorations of techniques taken from historical painting genres — such the use of stacked perspective in Persian miniature painting — while also incorporating new sculptural and three-dimensional elements that further emphasize qualities of illusion and artifice. Titled In Between Places, the show is a striking introduction to the artist’s work. 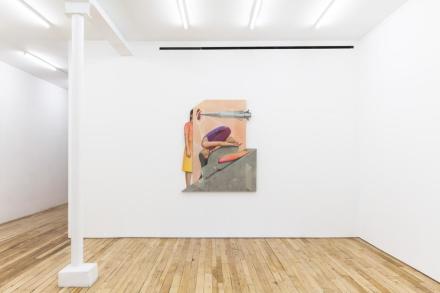 Arghavan Khosravi, In Between Places (Installation View), via Rachel Uffner

Largely made in isolation during the past year of quarantine, the paradoxical scenes in Khosravi’s paintings often reflect the artist’s experiences growing up and living in Iran, where personal freedom remains severely constrained by ideological autocracy. Made from densely layered sets of images, the new paintings evoke the structure of a theatrical set and the corresponding implication of a world built on false appearances, a trompe l’oeil in three-dimensional space that mirrors ruptures in Khosravi’s own life as she lives in the United States, separated from her family in Iran. In a more general sense, the works’ fractured surfaces amplify the feelings of distance and dislocation that have characterized many people’s daily lives during periods of quarantine over the past year. 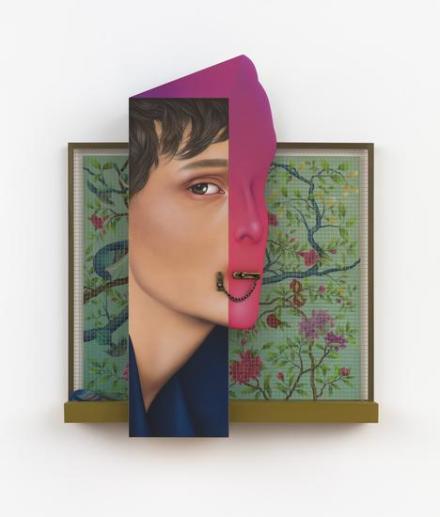 Visually distinct yet conjoined, the panels place multiple realities on a collision course, forging something new and strange through contradiction. In these clashing compositions, Khosravi draws upon the clear divide between public and private life, notions of space and persona suspended in an alienated state. Floral motifs and lush color imply heavens hiding behind closed doors, a utopian paradise hinted at but left out of reach. 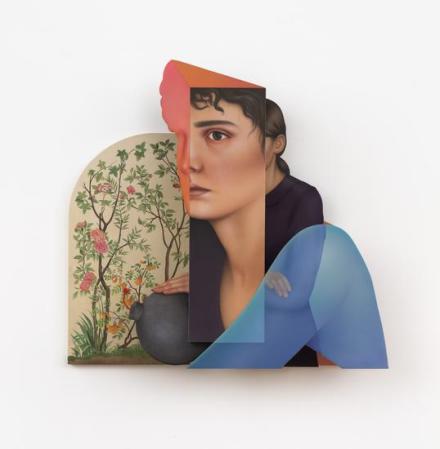 The figures in Khosravi’s paintings are closely cropped, mere portions of a full image that present the body as an abstraction within space, taking the large-scale dioramas of artists like Tom Wesselmann as a starting point, but placing them into a politically-focused relationship to their environments. Geometric forms achieve a new level of prominence through the use of shaped canvases, which unite multiple picture planes to form a whole image.

For Khosravi, space is politics, and her work here welcomes an experience of both in close quarters. The show closes June 5th.

This entry was posted on Wednesday, April 21st, 2021 at 12:15 pm and is filed under Art News, Featured Post, Show. You can follow any responses to this entry through the RSS 2.0 feed. You can leave a response, or trackback from your own site.