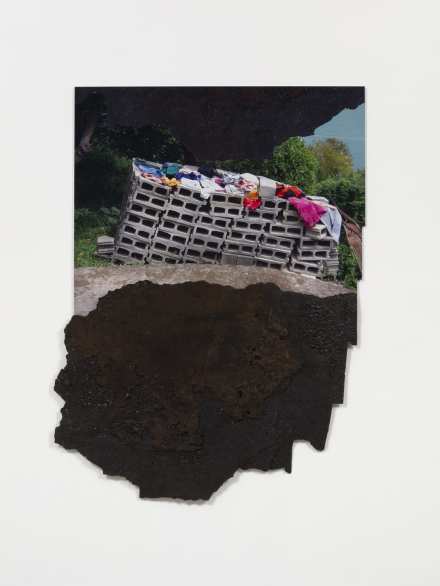 Currently on at Tanya Bonakdar in New York, the gallery has opened a debut solo show by artist Karyn Olivier, At the Intersection of Two Faults. Olivier’s artistic practice merges multiple histories and collective memory with present-day narratives, manipulating familiar objects and spaces, to re-contextualize the viewer’s relationship to the ordinary. The show, featuring a range of recent works, asks the viewer to reconcile memory with conventional meanings, ultimately revealing contradictions and dualities as well as new possibilities and ideas. 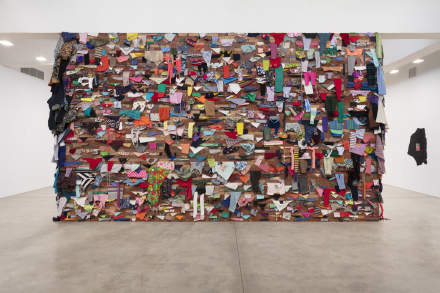 Olivier’s work often reflects on public versus private space or the exterior versus the interior, recalling communal nostalgias connected to social and physical experiences and how those phenomena relate to inclusivity and acceptance. How we interact with and dissect conflicting narratives and their representation in art is at the core of this exercise, with recurring themes of absence, invisibility and displacement often embedded in the viewing experience itself. At the entrance of the exhibition are multiple works comprised of salvaged asphalt roofing, drawing on the contradiction of origin and destination; material dredged up from below the viewer’s feet and set above their heads, here is presented at eye-level, a negotiation of space that repositions this discarded material functions as a window of sorts, a view into the substance itself in a manner that forces consideration of unseen vectors and unspoken streams of production. 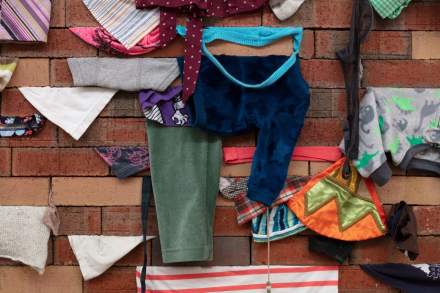 FORTIFIED stands at the front of the main gallery, a 20 foot long, 12 foot high wall held together with clothing, colorful sleeves and patterned socks protruding through the gaps between the bricks. Who are the bodies and the cultures from which this material was used to produce this monolithic object? The notion of loss is palpable here, but a sense of loss that evades easy legibility. There is the sense of sacrifice and imposition, but there is never a defined narrative that finally emerges, just more questions of origin and destination. Similarly, THE BODY WAS THE HOME THAT MATTERED (Monument) strips of layered clothing are draped from a burnt and charred fence post inviting consideration of fire and its contradictions—regenerative and destructive, cleansing and polluting, a welcome home and a murderous barrier. The line between an object of contemplation and an object to obfuscate and block movement is again emphasized, a question of movement that rarely offers easy answers. 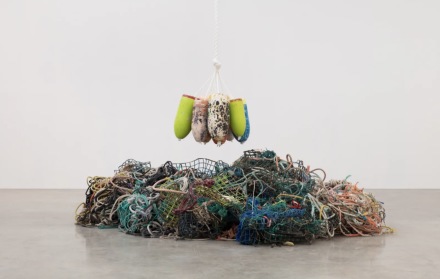 Karyn Olivier, HOW MANY WAYS CAN YOU DISAPPEAR (2021), via Tanya Bonakdar

In the rear gallery space, a dissected hoodie is draped on a coat rack fashioned from an old and worn coal shovel handle. Its simple lines support the garment’s bodiless, dissembled shape. The absence of the figure becomes emblematic, a literal and metaphorical reference to mortality. Relating to concepts of human loss, grief and the need for racial justice in our troubled democracy, FALSEHOOD (Cape) reflects this void, both physically and emotionally. Loss and grief pervade the show, but rarely in a sense that allows the viewer to fixate on a totemic resolution. The result is a pervasive effect, one that follows the viewer long after leaving the gallery.

This entry was posted on Tuesday, June 29th, 2021 at 12:00 pm and is filed under Art News, Featured Post, Show. You can follow any responses to this entry through the RSS 2.0 feed. You can leave a response, or trackback from your own site.