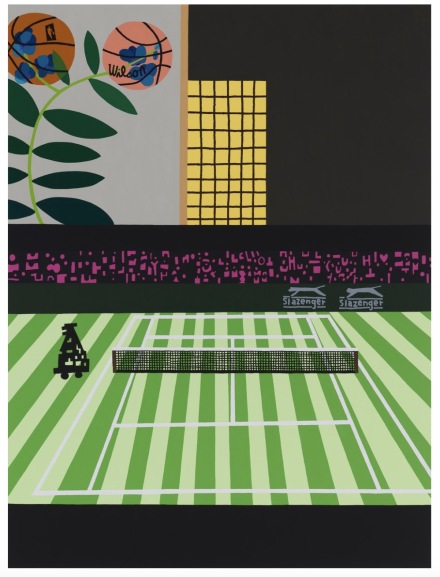 Just in time for Wimbledon, painter Jonas Wood has installed a selection of new works at Gagosian, paying tribute to the highest honors of the tennis circuit, the four major Grand Slam courts, and the disparate landscapes on which aspiring champions are pitted. On view through July 16th at Gagosian’s Madison Ave. exhibition space, Four Tennis Courts forms a Grand Slam of its own, in which the rigors of professional athletic competition are displaced by deft visual play. 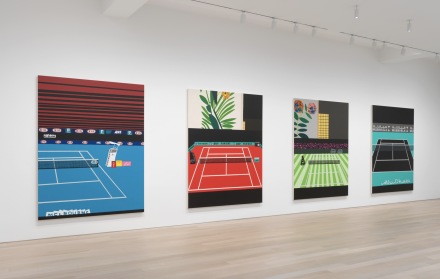 Describing his work as a visual diary or “even a personal history,” Wood charges images of people, places, and objects from his everyday life with art historical references. Inspired by the bold formal distillations of such artists as David Hockney, he emphasizes pattern, shape, and ornamentation while confounding scale and perspective. Here, Wood’s already intriguing predilection for toying with, and occasionally undermining, the hard geometric forms of sports fields, domestic interiors and cultural icons finds a fascinating focal point, the simple set of parallel lines that make up a tennis court, and the near-limitless permutations of play that unfold across its surface. 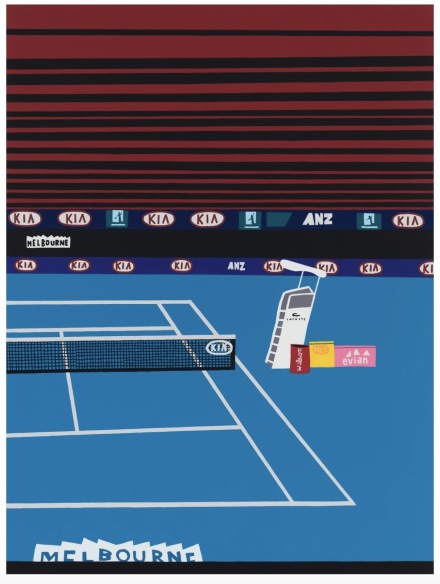 The artist is no stranger to sports imagery, and his post-Pop portraits have often focused on boxing, baseball, and basketball cards, tokens that have as much to do with celebrity as nostalgia. He later became interested in depicting the physical spaces associated with sports, drawn from his viewership of matches and games on TV. From his observation, Wood developed a shorthand approach to representing courts and fields, paring complex scenes down to geometric shapes and flat, saturated colors, then matching them up with tropes and motfis from past works (flowers, basketballs, and the like). Using televised events as reference, Wood foregrounds the strikingly abstract nature of tennis court design; he renders each site large scale and in portrait format, preserving its key characteristics while drastically simplifying, or eliminating altogether, the players and spectators. The courts—in Abu Dhabi, London, Melbourne, and Paris—are distinguished by their iconic colors and identifying signage, yet equally are transmuted into the artist’s own style, posing a space that underscores both the space’s iconic cultural signature, and his own observation of it. 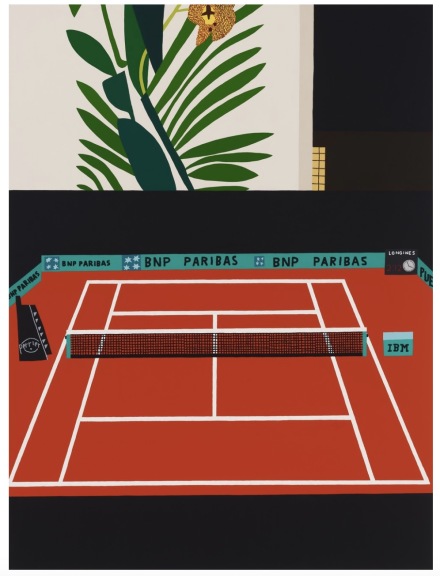 The chromatic density and richness of these works stands in contrast to the simplicity of their composition. Wimbledon with Bball Orchid (2021) and French Open with Orchid (2021) incorporate snippets of paintings of plants and basketballs, hinting at the studio space beyond the screen, while Australian Open with Red Lines (2021) and Abu Dhabi (2021) feature strategically positioned abstract elements, with bars of red and black recalling postwar Color Field painting. Together, the quartet showcases the subtle differences of play, the variations in space and density that equally challenge the player (one is reminded of Nadal’s near invincibility on clay, for instance, or Djokovic’s skill on hard court). The result is a unique study in sport as landscape, material as participant, that so often fascinates the mind of the tennis fan.

The show is on view through July 16th. 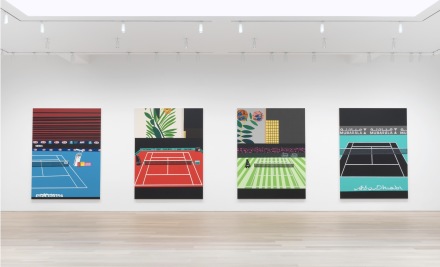 This entry was posted on Monday, July 5th, 2021 at 6:44 pm and is filed under Art News, Featured Post, Show. You can follow any responses to this entry through the RSS 2.0 feed. You can leave a response, or trackback from your own site.