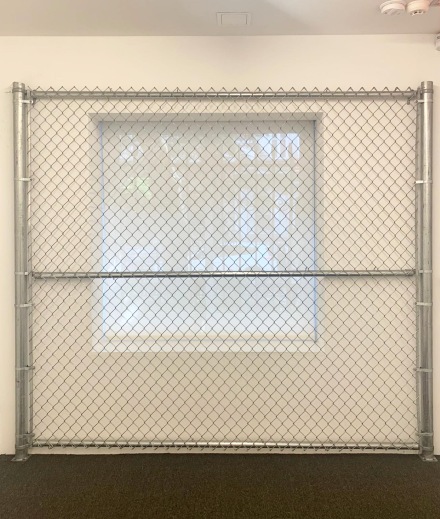 On view this summer in New York, artist Cady Noland has opened a show of new works at Galerie Buchholz in conjunction with a two volume publication of the artist’s work and writing, both of which are unified under the title The Clip-On Method. The show, offering a rare chance to see Noland’s work in person, continues her incisive and often confrontation exploration of violence and power in the American psyche, and its effects. 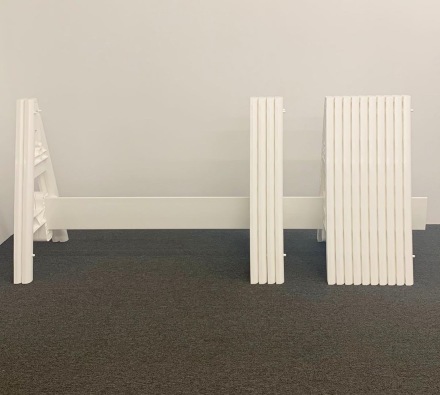 Noland has long been an enigmatic and powerful voice in the discourse of American contemporary art, showing rarely and offering up a body of works that cull together moments of brutal violence and the machinations of American political life into stark assemblages. Walls of fences dot the gallery for this show, blocking off windows and walls, and emphasizing the division of space as an undercurrent of ownership and the soft power of capitalism. Similarly, a series of A-Frame barricades are also spread throughout the gallery, arranged into surreal reworkings of their familiar forms while still underscoring their roles in dividing space, particularly in the context of law enforcement. The specter of police violence is always close at hand here, and is echoed in Noland’s series of flat, paneled pieces spread through the gallery space. These are older works, silkscreened texts from police manuals detailing officer behavior. 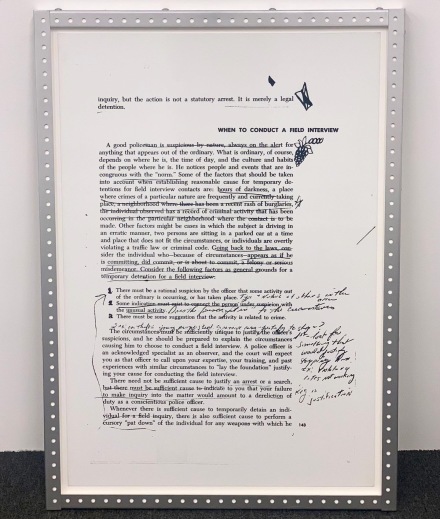 It’s a particularly striking note that Noland’s work has not changed much materially over the past decades, her pieces still including the same masses of chainlink fence and imagery lifted directly from law enforcement texts and news headlines. But that same consistency seems to underscore a similar continuation of power relations and subjugation of the underclass. While in the 90’s her work may have referenced the violence of the LA Riots and neighborhood segregation, here he pieces take on the new context of children imprisoned after crossing the U.S. border, and the past summer’s nationwide protests against police violence. Noland’s work not only points to the particular problems endemic in modern America, but ends up offering a uniquely consistent lens through which to view the changing face of the same problems over several decades. 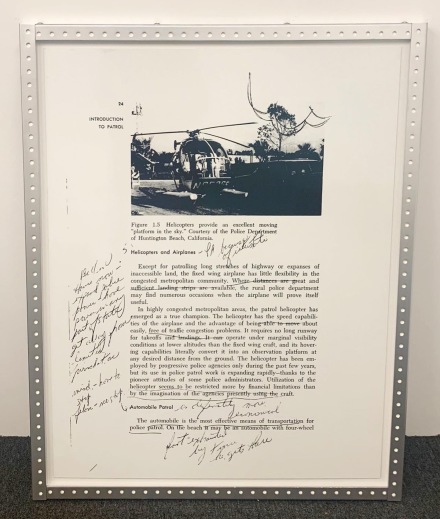 This entry was posted on Monday, August 30th, 2021 at 12:00 pm and is filed under Art News, Featured Post, Show. You can follow any responses to this entry through the RSS 2.0 feed. You can leave a response, or trackback from your own site.