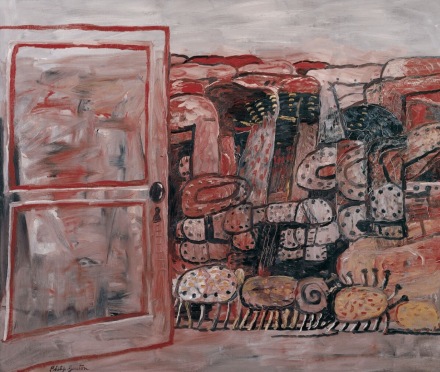 Open now at Hauser & Wirth’s New York exhibition space, the gallery gives a meticulous treatment to the early breakthroughs of painter Philip Guston. Charting the figurative innovations that Guston pioneered in the last decade of his career, the show brings together eighteen masterworks created after the artist turned away from abstraction to assert an unprecedented new figural language. On view through the end of the month, the show offers a rare opportunity to appreciate Guston’s expressive and enigmatic pivot during the last year of the 1960’s, and the political and social undertones of his work. 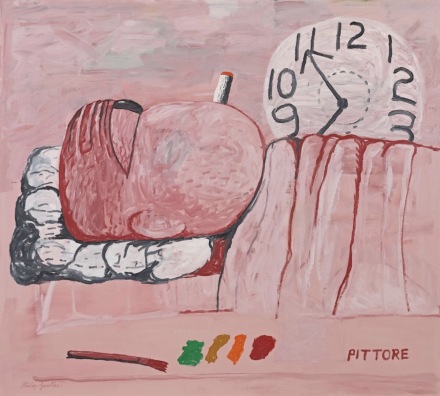 Guston’s move towards an expressive, abstracted approach towards figuration is one of the better documented turns in contemporary art, controversy and all. Critics denounced the work, which moved away from the abstraction de jour, and towards a dark, unnerving depiction of bodies and figures. Yet Guston was undeterred, and would continue in this mode for the next decade. Comprising masterworks on loan from important private and museum collections, the show offers a rare look into this body of work and underscores the relevance of its impact. 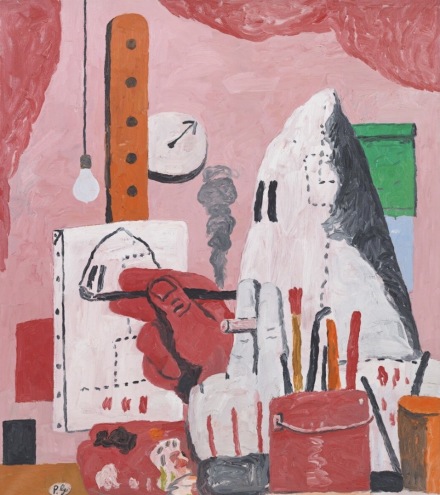 Guston’s unique visual language, growing from canvas to canvas, incorporates tangled and disembodied piles of legs, shields, bugs, whips, doors, and piles of shoes that recall the horrific images that emerged via the media from the liberation of Nazi concentration camps to the carnage of the Vietnam War and the Killing Fields of Cambodia. In Ancient Wall (1976), soles of shoes are stacked along the painting’s foreground while a collection of limp legs dangle over an imposing brick wall. A lone unblinking eye judges the scene from the lower right corner of the canvas, a witness to the terror. Similar imagery arises in such paintings as Night Room (1976), in which amass of legs and shoes is silhouetted against the black void of the night sky, and Entrance (1979), where a door has opened onto a room stuffed full of shoes, legs, shields, and bugs, among other detritus of trauma. 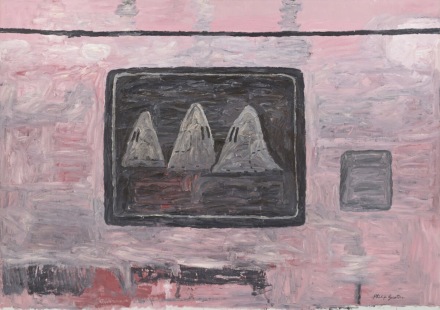 The exhibition spotlights the confessional intimacy, introspection and self-revelation of Guston’s late canvases, with their universal themes. Here, the artist’s exploration of the human condition harkens back to motifs from his earliest figurative works of the 1930s and 40s, informed by the bigotry and racist violence he witnessed as a boy in Los Angeles. Rich in tone and visual expression, his pieces still, to this day, manage to garner a frank and vivid discourse, as evidenced by the controversy of his major retrospective being pulled from museums just last year. His distinctive visual language includes disembodied legs, pointing fingers, and piles of shoes that summon the horrors of the past and presage future genocides and racial terror. But Guston’s brilliance resides in his ability to convey the persistence – albeit delicate – of hope within this dark realm, with an iconic lightbulb suggesting an eternal potential for illumination.

This entry was posted on Friday, September 17th, 2021 at 12:00 pm and is filed under Art News, Featured Post, Show. You can follow any responses to this entry through the RSS 2.0 feed. You can leave a response, or trackback from your own site.