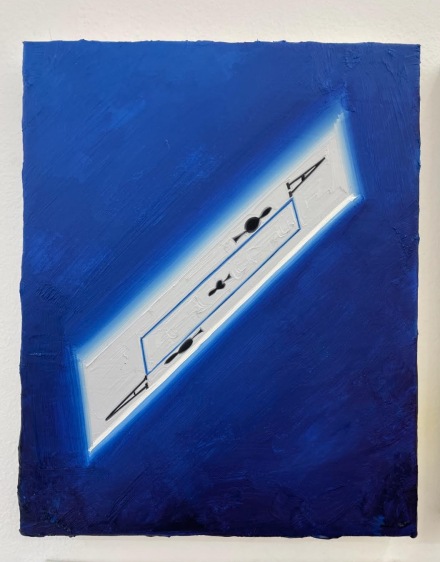 Bungalow’s inaugural pop-up space on Orchard Street presents a show of young artists that is equal bits fest and flesh. As you enter the gallery, a re-CAPTCHA inspired work by Mira Dayal cryptically sets the tone. Imbibe, it reads, as if a catechism for absorbing the bounty that awaits. A vertiginous work nearby, presented by Thomas Blair (2021) seems to wink at you with its illusory moiré hatchings. Adjusting your eyes beyond the painting’s edge reveals a beguiling charade of subversion and submission. This is nowhere more apparent than in an untitled work of Justine Neuberger’s where blushing pastels attempt to soften the taut brawn of a BDSM tussle. The deftness in draughtsmanship is something to marvel at, as equally are the brawling scenes of domination on display. Shards of pink and yellow by Kiyoshi Kaneshiro (2021) resound with unexpected harmony as the porcelain shrapnel inheres a composition that is at once fragile and fraught. 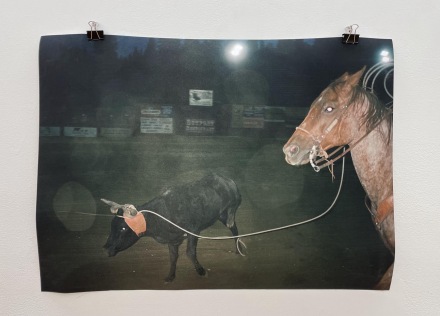 Cards by Luke O’Halloran somersault down sapphire pools of negative space flashing odds and evens. A similar legerdemain is at work in the The Purloined Letter, when Minister D— conceals the letter in plain sight by writing on the reverse and re-folding it the opposite way, much like the flip of a coin or card. O’Halloran’s studied exploration of “chance and luck and randomness” seems intertextual as it purloins the rules of gravity with painterly precision. Placed within view are three beaver logs that echo this theme of double-edges: chewed symmetrically like diamond spears, Louis Osmosis has pierced them lengthwise and encrusted their crests with nail charms. They are playful digs at the dialectics of coping mechanisms both instinctive and destructive where teeth become a tool of fixation: one resorts to nail-biting in situations of stress-induced anxiety whilst the sound of running water triggers a beaver to compulsively construct a dam.

Another scene of mastication features Neuberger’s monkey (2017), devouring the juicy nectar of a watermelon as a car goes up in flames. Plums hanging in the foreground dissolve into a pool of watercolor, tacitly blowing up the gloss of nature-morte conventions. Absorbing this scene, one is reminded of La Grande Bouffe (1973), a paroxysmal film of feasting that serves a deeply prescient allegory about capitalism’s innate contradiction: the prerequisite of excessive consumption careering towards a cul-de-sac of scarcity. As we approach 2022, we are consuming ourselves in the midst of a Sixth Extinction. Recall the message at the entrance, as the moiré painting lured you in with its optical charms; imbibe, the message reads tongue and cheek, as if encouraging consumption ad nauseam without taking stock of the approaching flames to underscore the sheer inanity of the present.

In this vein, Neuberger’s monkey and Osmosis’s bedazzled beaver logs similarly pose a question about the sanctity of the human/nonhuman divide. Posthumanist notions abound throughout the show, firstly from the lanterns teeming with fluvial sea life and puckered with antediluvian tassels from painter Pilar Almon and design studio Charlap Hyman & Herrero. Then there is a photographic staging by Juergen Teller of an Odradek-like figure of detritus that appears to peck at a lime. This notion of mismatched or missing parts is foregrounded in Ellen Pong’s glazed stoneware Phantom Limb (2021). Adrian Schachter conjures posthuman themes in jest with a subversion of the headless horseman trope. 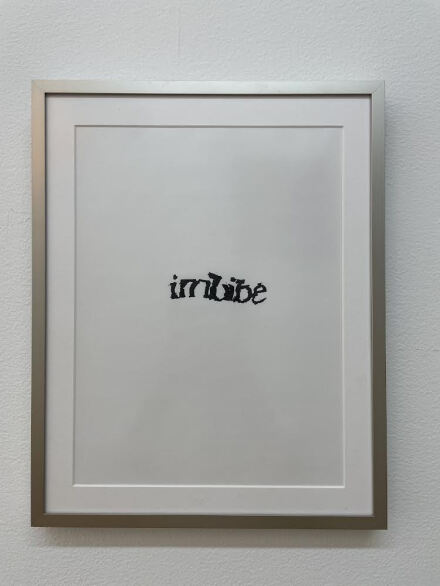 Upon first glance, the reversed-centaur seems cursed by the sum of its parts—one wonders whether this hybrid would fare better with human reason and a set of galloping limbs. But this is an upside down world, as you were shown by Osmosis and the rest. If one insists on the non/human divide that Schachter quips, the seams of this fiction ultimately come apart in Alexia Mavroleon’s haunting scenes of a rodeo at witching hour. Despite being photographs, they ring surrealistically as a horse, cow and calf are chased in pitch-darkness. The only lucid element in these images are terror-stricken faces; once again, we are prompted to question the bounds of human reason when it can lead to this. The curatorial provocation of this show toils over this bloodthirsty breed of consumerism. We might do well to remark as Francis Bacon once did: “We’re flesh, potential carcasses. If I go to the butcher, I’m always surprised for not being there instead of the beef.”

This entry was posted on Thursday, December 9th, 2021 at 12:09 pm and is filed under Art News, Featured Post, Show. You can follow any responses to this entry through the RSS 2.0 feed. Responses are currently closed, but you can trackback from your own site.