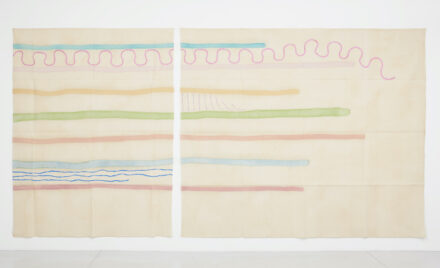 On view at Casey Kaplan this month in New York, the gallery has unified a series of works created by the Italian artist Giorgio Griffa, creating a near-past retrospective that explores the artist’s work over the last 20 years throguh a selection of seven paintings. This exhibition marks the fifth iteration in a series of exhibitions focusing on the artist’s practice by decade, continuing a conceptual exercise that has offered concise but attentive looks at his work over the course of his career. 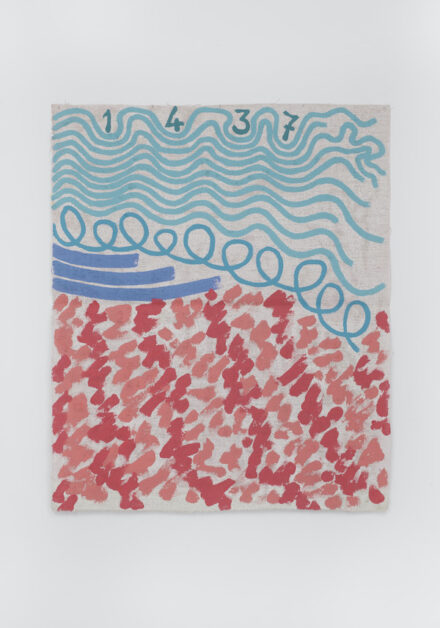 Griffa’s work has long been characterized by both repetitive and spontaneous sequences of marks and gestures. Brightly colored lines snake across raw, unstretched canvas, or ripple in waves and tumble down like leaves, while others march like soldiers in regimented procession, or zig zag and careen like pinballs. Laid out like sheets on the floor, Griffa works freely across unprimed, unstretched raw canvas (made of linen, jute, hemp, or cotton), referring to them as “fragments of space” that serve as ground for his water-based acrylic paints, mixed thinly, that seep and bleed upon application. The paintings are exhibited unframed, pinned directly to the wall with small nails along their top edge, and when not displayed, are folded into sections and stacked, creating an embossed underlying grid for his compositions. The ritualistic act of folding and unfolding (re)activates the canvas with each viewing. 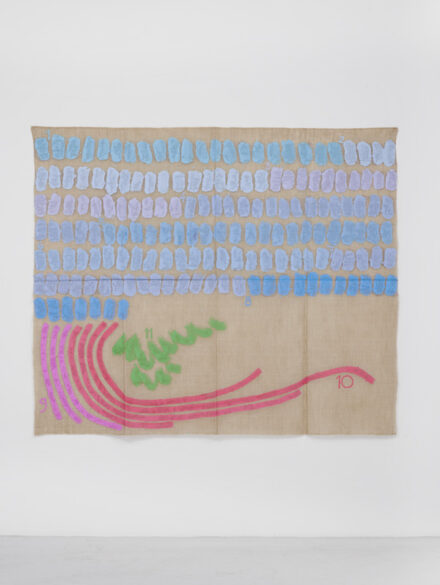 Held in tension with meditation and improvisation, the canvas is a study of the transitional space between the known and unknown worlds, yet draws on simple gestures, numbers and marks to create enigmatic reinterpretations of the known, often turning the structure of knowing into an exercise in unlearning and detuning. In Numerazione (2000), a series of stacked grey and bright pink diagonal lines are seen in juxtaposition with a grouping of uneven pale blue curved strokes. The numbers “2” and “3” are painted, in pink and blue, respectively, corresponding to the same color diagonal stripes and the three curved streaks. Colorful gestures are painted in correlation with digits existing within the infinite mathematical ratio (the “golden mean”) in Canone Auero 948 (2011). Each mark’s repetition is dictated by its partnered number, inexplicably providing geometric order to a natural phenomena. Gioiadolore (2021), translating to “Joy/Pain” is the latest painting included in the exhibition. It is part of Griffa’s recent Dilemma series, which consists of works born from opposites, exploring the inherent conflict between yin and yang, left and right, presence and absence. Through color and form, Griffa probes the potential of a contradictory world, teetering between anonymous signs and known words, resolved to live side-by-side. 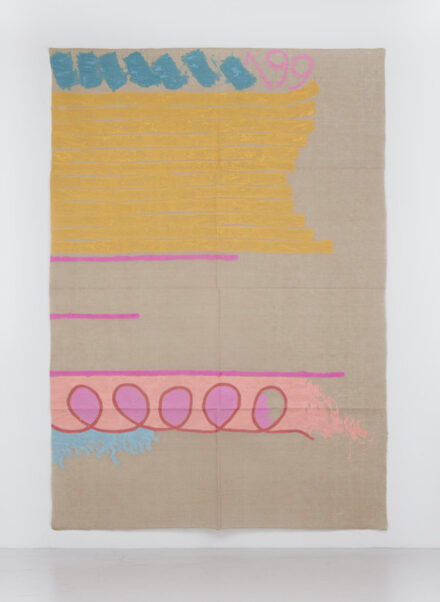 The exploration of knowledge, what we do and do not know, and even what we might never know, is at the core of these works, a fitting point of inquiry during the turbulent years of the pandemic, underscoring Griffa’s continued ability to find just the right expression for the time. His work is on view through February 26th.

This entry was posted on Thursday, January 27th, 2022 at 12:00 pm and is filed under AO On Site, Art News, Featured Post, Go See. You can follow any responses to this entry through the RSS 2.0 feed. You can leave a response, or trackback from your own site.