New York – Ashley Bickerton: “Seascapes at the End of History” at Lehmann Maupin Through March 5th, 2022 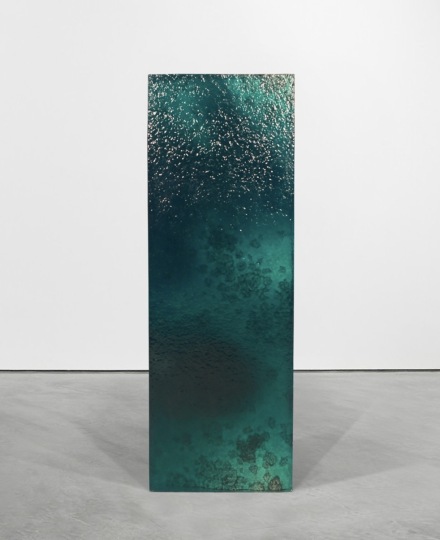 This month, Lehmann Maupin presents Seascapes at the End of History, artist Ashley Bickerton’s sixth solo exhibition at the gallery, continuing the artist’s bold and expressive use of sculpture and natural iconographies to create striking, illusory effects. Posed as a reappraisal of the seascape genre, the exhibition features work first conceived of while living in New York City prior to the artist’s relocation to the Indonesian island of Bali in 1993. An avid surfer, Bickerton’s work here draws on resin, fiberglass, corten steel and other materials to blend industrial material with natural iconographies. 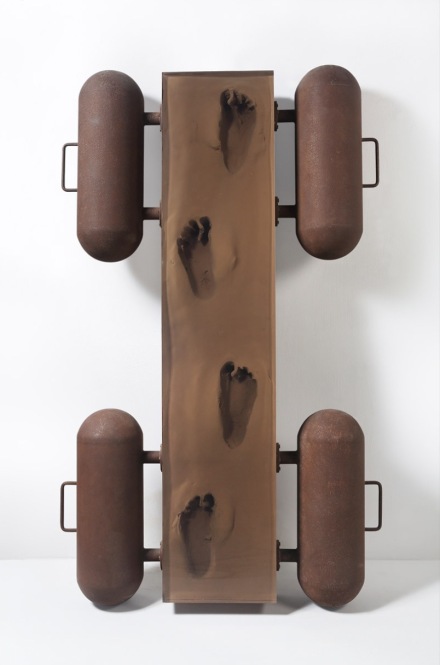 Made of resin and fiberglass, Bickerton’s Ocean Chunks appear as solid, three-dimensional expanses of undulating ocean water, frozen in time, and extending the artist’s career-spanning interest in the hybridization of mediums—particularly sculpture, painting, and photography—and his efforts to formally overhaul art historical genres such as seascape painting. In a particularly elaborate, large-scale work from this series, Hanging Ocean Chunk (To Be Dragged Up Cliff Faces, Strung Across Ravines, and Suspended From The Forest Canopy) 1 (2022), a square ocean chunk encased in stainless steel rails is suspended from the gallery ceiling. Festooned with a panoply of accessories including carabiners, flags, coils of rope, and climbing equipment, the work suggests and provides for its own transportation through difficult terrain. Beyond its current gallery setting, Bickerton has prepared for possible future installations of this work on cliff faces, over gorges, and high in forest canopies.

One of the exhibition’s most personal works, Floating Family Footprints (Flow Tide) 1 (2022), documents the trail of footprints left by the artist, his wife, and their child during one of their walks together on the beach. As in the Ocean Chunk series, Bickerton uses resin and fiberglass to create the impression of a surface of shimmering water, beneath which two sets of adult footprints are visible on either side of a smaller, toddler-sized set between them. Like other works in the exhibition, Floating Family Footprints (Flow Tide) 1 features a pair of flotation devices mounted onto the broad slab of preserved beach, indicating its potential use as a raft should the need arise. 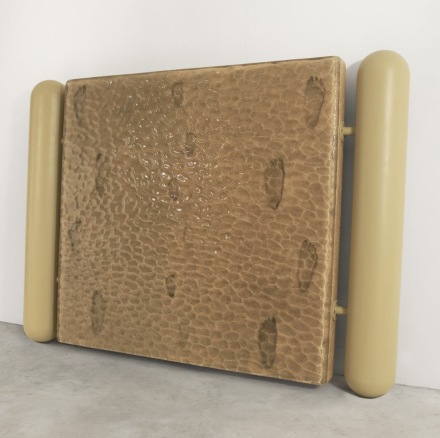 The meandering vein-like designs etched upon the glass of River Vector: White (2021) and River Vector: Big White (2021) suggest cartographic representations of rivers and their tributaries. These works poetically elaborate upon the roles played by waterways within the human rearrangement of the elements, as detritus flows out of rivers and into the ocean, where it may swirl around for decades before being deposited back onto the shore. Far from being random or haphazard, the meticulous arrangement of the detritus within these box-like structures is based on Bickerton’s close attention to how such items—including discarded bottles and broken plasticware, among other colorful, unidentifiable bits—are distributed by the tide as they wash upon beaches. 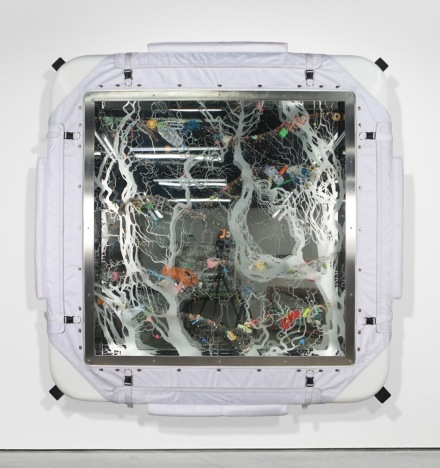 Formally speaking, the new works included in Seascapes at the End of History represent something of a return—albeit one taken, both geographically and artistically, the long way around—to the industrial trappings of Bickerton’s creative output during the 1980s and early 1990s. Continuing a nuanced investigation of the linkages and lines between the industrial and the natural, Bickerton’s work opens unique dialogues into a world overshadowed by  the threats of global climate change and the modern era of man’s widespread alteration of the planet at large.

This entry was posted on Monday, February 21st, 2022 at 12:00 pm and is filed under Art News, Featured Post, Show. You can follow any responses to this entry through the RSS 2.0 feed. You can leave a response, or trackback from your own site.