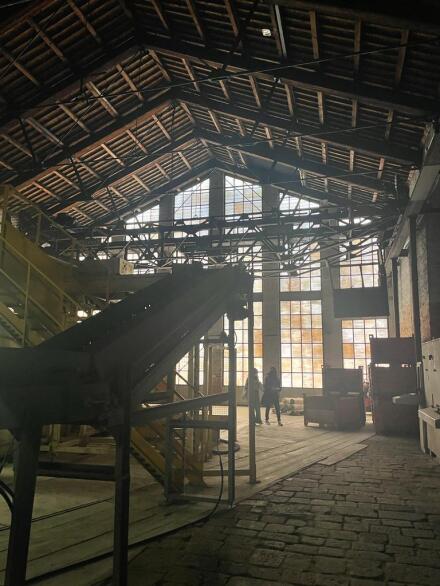 Spread between the Arsenale and Giardini, the second half the Venice Biennale’s usual run of exhibitions, the National Pavilions, have now opened, with a range of concepts and interests contending for viewers’ attention alongside the fair’s main show. Serving as a central draw in the exhibition, and a chance to elaborate and expand on the concepts and ideas of the Biennale itself, the National Pavilions offer a fresh series of perspectives to build on and elaborate the themes developed. 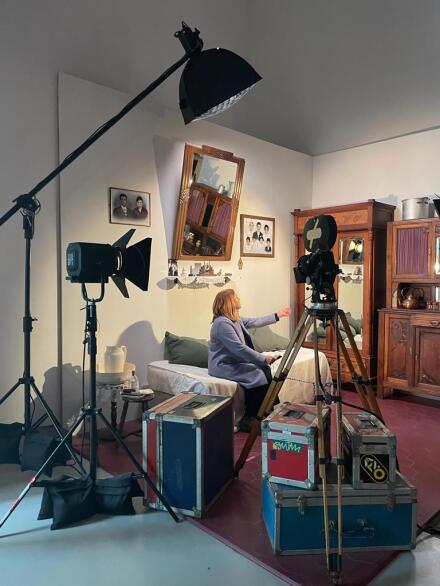 Zineb Sedira at the French Pavilion

The show, which runs concurrently with the main exhibition, brings a range of perspectives, and a series of large-scale presentations by single artists and groups, allowing for impressive statements and expressions throughout the show. At the Danish Pavilion, the show We Walked the Earth, created by Uffe Isolotto was a clear standout, spreading a series of hyperreal sculptures and images that imagine a transhumanist world: human bodies merged with animal ones, pieces of meat and rustic material spread out in a manner that commands meditation and consideration on the state of the world today. Another powerful show came from artist Sonia Boyce at the UK Pavilion, which ultimately took home the honors for the Best National Pavilion. The show featured a series of video works documenting five Black women musicians of different generations—Poppy Ajudha, Jacqui Dankworth, Sofia Jernberg, Tanita Tikaram and composer Errollyn Wallen, who improvise and interact through their respective vocal and compositional abilities, creating a swirling mass of hypnotic, beautiful music that plays against the brightly lit, colorfully patterned space. Another show mining a different angle on expressive tendencies towards the body and politics came from artist Jonathas de Andrade, who posed the challenges of Brazil’s current political climate to conflicts of the body, filling the space with colorful depictions of body parts, video and wall-mounted texts. 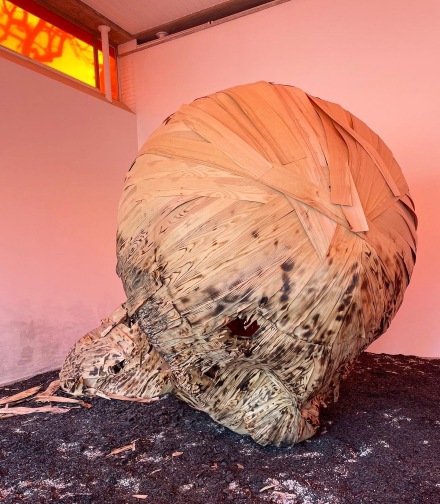 Latifa Echakhch at the Swiss Pavilion 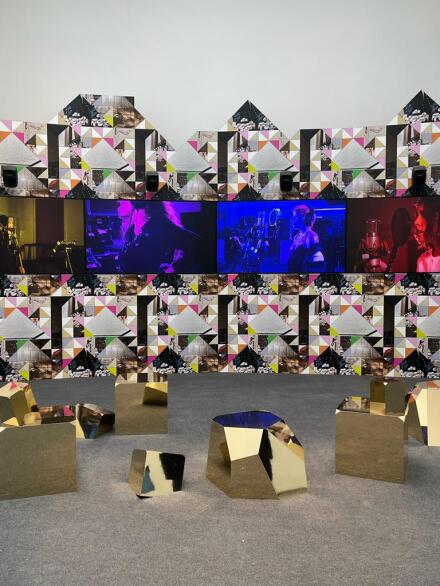 Sonia Boyce at the British Pavilion 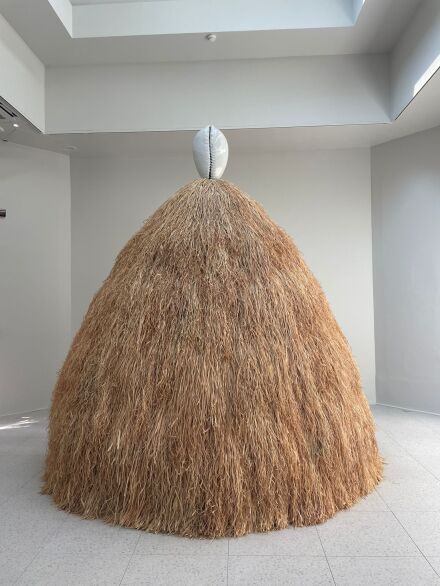 Simone Leigh at the US Pavilion 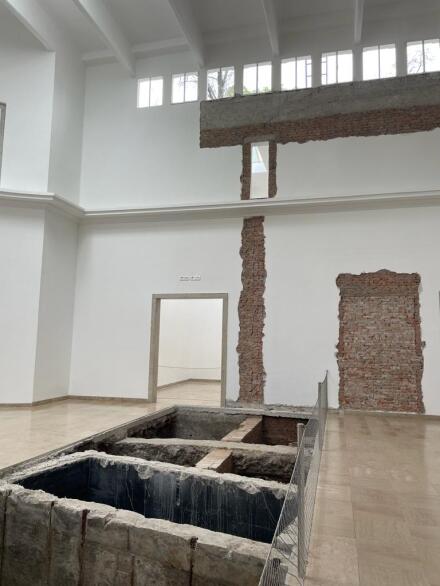 Maria Eichhorn at the German Pavilion

Another intriguing work came from Swiss Pavilion, where Latifa Echakhch was presenting a body of works that mined notions of music and release, of harmonies and dissonances, and of the mixed feelings of expectation, fulfillment and disappearance. The sculptures are part of an orchestrated and enveloping experience, a rhythmic and spatial proposal that allows viewers to experience a fuller perception of time and of their own body, posed from the perspective of the aftermath of transformative listening experiences. Bathed in dim late, the artist’s forms created a dense and multi-layered experience. Meanwhile, at the United States’s entry in the Pavilion, artist Simone Leigh‘s impressive show, Sovereignty, brought together a range of the artist’s most notable ideas and images to Venice. Art Observed has a full piece on the artist’s show online this week. Another much-discussed highlight came from the French Pavilion, where Zineb Sedira had created a full walk-in tableau of an early 20th century bar, inspired by the film work of Ettore Scola, and filling the space with the movements of a pair of dancers, emphasizing notions of repetition and re-enervation as a mode of exploration and investigation of both the past and possible futures. 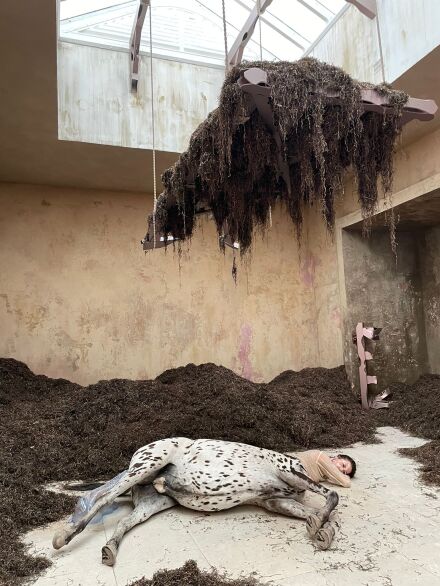 Uffe Isolotto at the Danish Pavilion 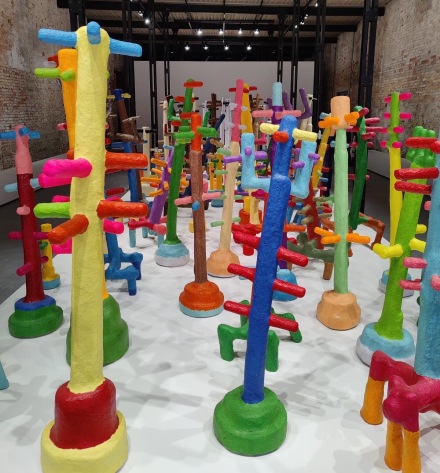 Ahmed Ibrahim at the UAE Pavilion 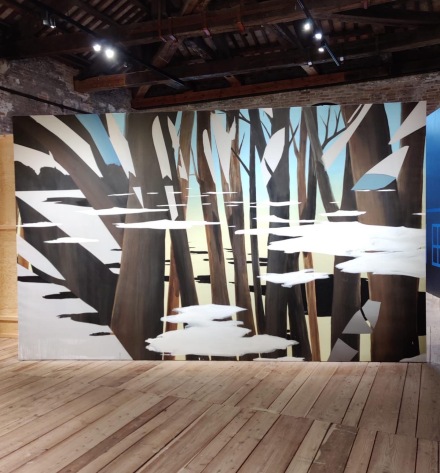 Tina Gillen at the Luxuembourg Pavilion

At the Arsenale, a range of unique projects and dynamics were explored. In the Malta Pavilion, Arcagelo Sassolino had orchestrated an engaging fusion of light and image, with massive drops of melted steel dripping from containers in the ceiling into separated vessels, intended as a tribute to Caravaggio’s altarpiece The Beheading of St. John the Baptist. At the United Arab Emirates Pavilion, by contrast, artist Ahmed Ibrahim was presenting Between Sunrise and Sunset, a work consisting of towers of brightly colored material that served as the artist’s tribute to his hometown of Khor Fakkan. At the Luxembourg Pavilion, artist Tina Gillen was also meditating on space, using immense architectural structures and mounted images to explore the interactions and connections between interior and exterior awareness. Also of note was the Latvian Pavilion, where artist duo Skuja Braden was presenting a series of animated sculptural works, using the materiality and images presented to reinterpret the language and understanding of modernity.

With such a diverse range of works and concepts spread throughout the shows, the Biennale will welcome repeat visitors and ongoing consideration over the summer. It closes November 27th. 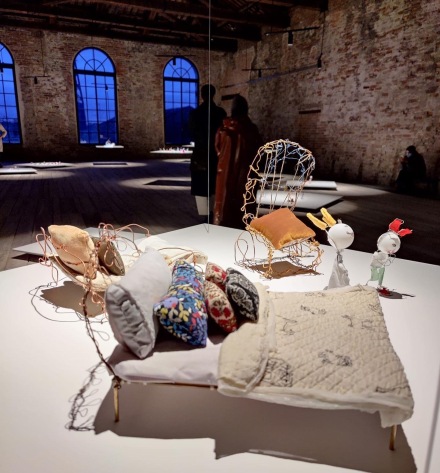 Fusun Onur at the Turkey Pavilion 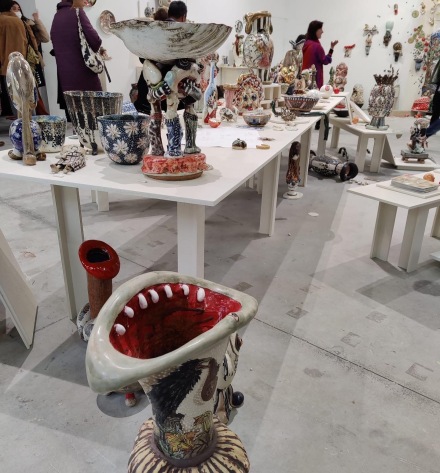 Skuja Braden at the Latvian Pavilion

This entry was posted on Monday, April 25th, 2022 at 4:35 pm and is filed under Art News, Featured Post, Show. You can follow any responses to this entry through the RSS 2.0 feed. You can leave a response, or trackback from your own site.