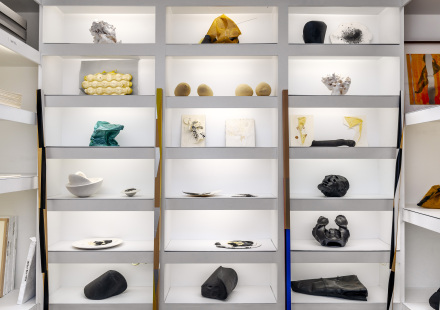 Third floor of the Gallery Building, 57th Street, between 5th and 6th Avenue, in a sinuous corridor, a discreet sign on one of the doors: SPACETIME. The faint lighting inside sets the tone.

An array of artworks is on view: floating sculptures, abstract paintings, a black suitcase facing a plasticine ball, a tree adorned with paper disks, large prints, small models including detergent caps and yogurt lids, a shoebox on a shelf, flying boomerangs, and a Japanese scroll greet the viewer in the first two rooms. The gallery is intimate, and the experience is total. Gabriel Orozco’s ongoing project is a secret which spreads from word of mouth to fortunate visitors and passersby. The show encapsulates 30 years of work masterfully staged in these tight quarters. 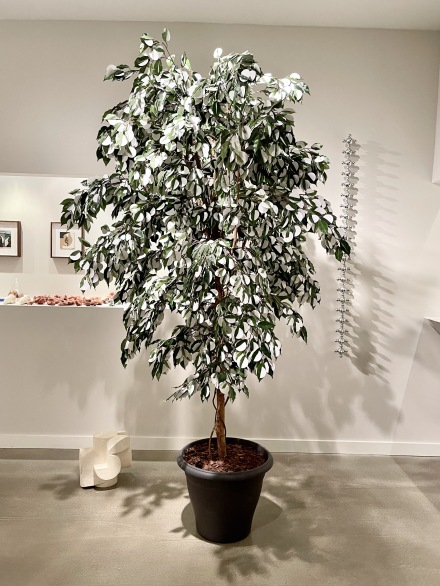 This exhibition happened by chance. After spending most of his time between Tokyo and Mexico during the pandemic, Orozco returned to New York in the Spring of 2021 and came across this space on his way to the Marian Goodman Gallery, which has represented him since the early 90s. As a counterpoint to the oversized white cube spaces which have become a staple to view art, Spacetime resembles a “Cabinet de Curiosités” with its labyrinthine architecture. It used to previously host the Francis M. Naumann Gallery, known for showing Marcel Duchamp and Surrealists painters, among others. The Modern history is still palpable, even though the gallery was vacated in early 2020. 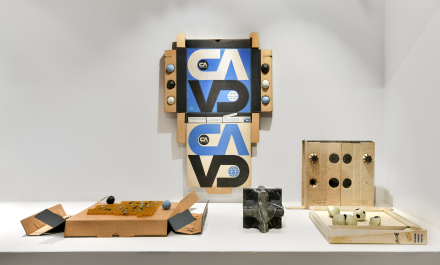 Orozco saw the space momentarily while it was in its transitional phase, more akin to a building site. The “déclic” happened when he wandered off in the hidden room nestled in its center, which later became the focal point of the current show: the “spaceship” room, with its 360-degree built-in shelves and its futuristic feel. Stumbling upon this deserted gallery in the heart of Manhattan felt like a sudden escape. 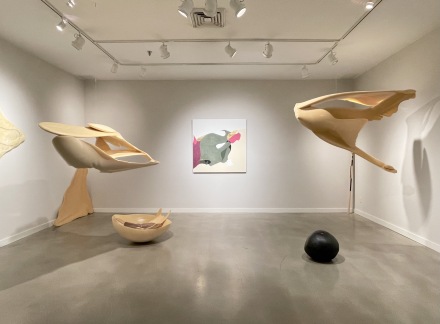 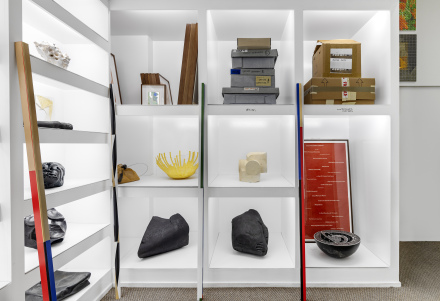 As an artist without a specific studio location, Gabriel Orozco regularly travels to his libraries across multiple continents, and lives in various parts of the world to produce art based on regional resources. While each location inspires distinct bodies of works, his daily rituals always include writing and drawing in his notebooks. Here in Spacetime, he encountered a neutral space where he could orchestrate his thoughts and visions “live”, in person, together, with a small team of people he trusts. His family is always close, and they were soon asked to help as part of the art handling team too. In a time where displacement and isolation have become commonplace, this specific “here and now” allowed for the physical experience of art to become a fiery act of resistance again, and an essential means to connect to oneself and to others. 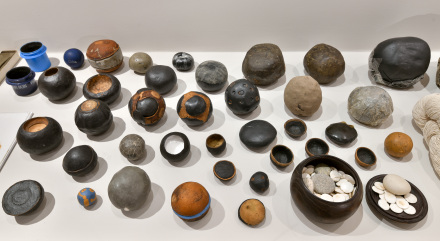 Some of the earliest works on view are from his “Working Table, 1993-1996” with over a hundred small models and experiments, which were last exhibited during his retrospectives at the Centre Pompidou in Paris, the Tate Modern in London, and the Museum of Modern Art in New York in 2009-2011. In this installation, the artist gives the same visual relevance to an onion skin propped up as a crown, conch shells inscribed with graphite diagrams, and orange peels modeled with black clay. Placed tightly on a shelf together, they become a collection of realia, a three-dimensional archive which traces back to his first show at the Marian Goodman Gallery in 1994, in which four yogurt caps were placed on the four walls of the 57th Street gallery space, one floor above. The miniature wax figures, made by squeezing and twisting the raw medium in between his fingers, prefigured the large-scale fantastical sculptures “Pinched Stars” cast in aluminum a few years later in 1997. The model-version of one the artist’s most iconic work “La DS” is also displayed for the first time in decades. In 1993, Orozco cut a 1960s Citroën DS lengthwise and removed its center part, reassembling the two remaining sections into an elongated, aerodynamic whole. The toy car version on view was subjected to the same process of extraction and reconfiguration, encapsulating the artist’s practice as a sculptor, which is often to transform rather than to create anew. 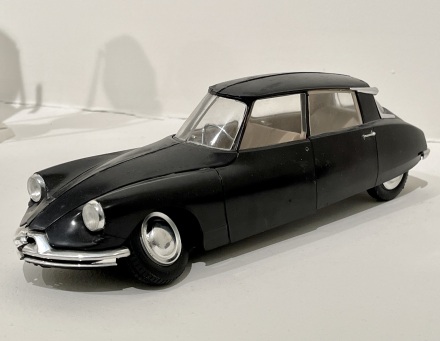 This modest 3rd floor gallery represents for Gabriel Orozco a rare opportunity to display his archives. Envisioned as an “open-storage”, an “open-studio”, Spacetime is an exhibit without the usual administrative process that surrounds an institutional show. No announcement, no advertisement, it remains an “off-site” and an “off-schedule” proposal. While the calendar is fluid (Spacetime has been open for almost a year) the layout of the works is both rigorous and thoughtful, poetic and playful, dense and focused. Perhaps for the very first time, Gabriel Orozco invites the viewer to become a witness and an active part of his creative process. 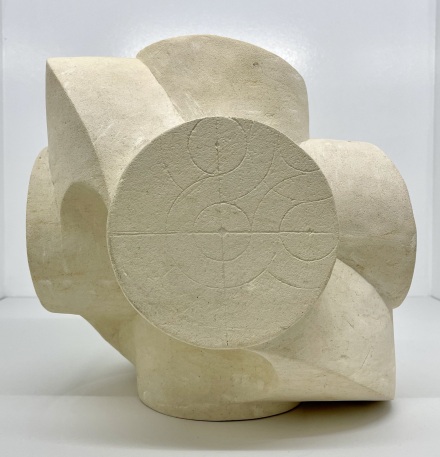 In 2018 for example, he temporarily relocated in Bali, Indonesia, where stone carving is an extensive form of artisanal labor. There, he learned the traditional chiseling technique in a stonemason yard used to handcraft Hindu reliefs. Combining circles, geometry and symmetry, he produced his series of “Dés”, cutting and carving 30 x 30 x 30 cm limestone cubes. While each sculpture is different, each of them begins with the same outline of disks and axis points traced with a compass on the six faces of the stone block. In the show, “Dé capital” evokes a rotating machinery engine, while “Dé interieur” is reminiscent of a human bust with its organic curved volume. 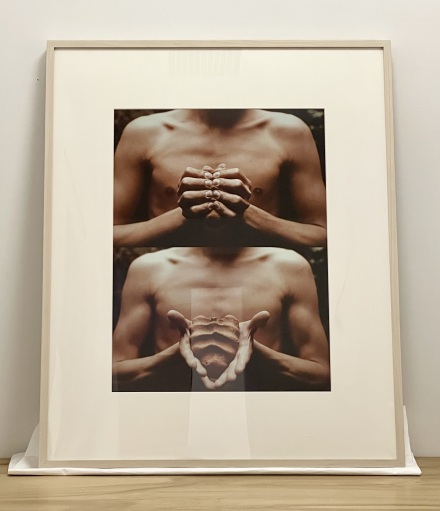 The presence of the body, without its formal representation, is a recurring theme in Gabriel Orozco’s œuvre. The terracotta sculpture “My Hands Are My Heart”, 1991, bears the imprint of the artist’s hands as he pressed a ball of red clay in his two palms, forming a heart-shaped object that reveals the process of its making. In the double photo-documentation visible in one of the back offices, the artist is seen bare chest holding the sculpture close to his heart, the texture of the clay, as an extension of his body. 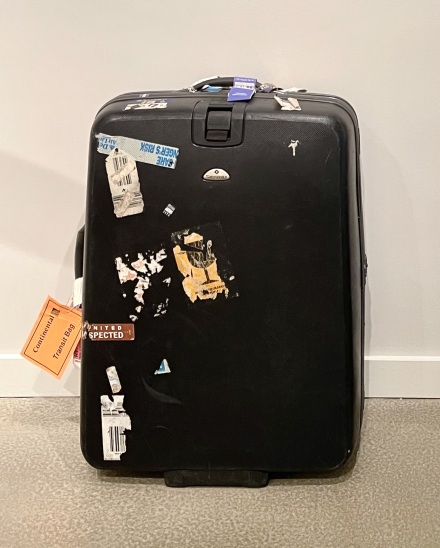 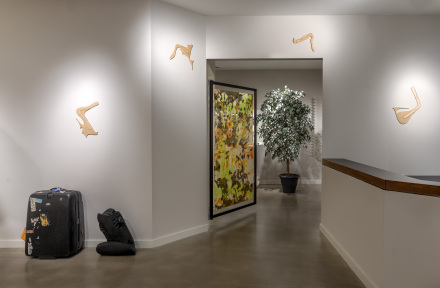 Interconnectivity, circularity, movement, transportation, the everyday, are only a few of the common threads that weave his practice together. The extensive variety of media and techniques used, as well as the different times and places the pieces were produced, enrich the understanding of the artist’s dense conceptual approach to art. As a further example, Orozco’s contribution to the 2001 International Triennial of Contemporary art of Yokohama involved him simply packing his luggage and going to Japan to exhibit his suitcase with its tags and worn surface. A signifier of the artist as a world traveler, or a vessel filled with the artist’s personal effects, it is shown without frills, leaning against the wall for the first time since its Japanese stopover. The luggage indeed had been stored in Marian Goodman Gallery’s warehouse simply labeled “Orozco Personal Suitcase” further blurring the distinction between art and life. 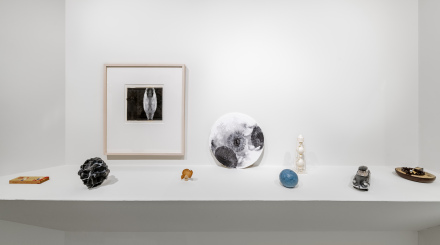 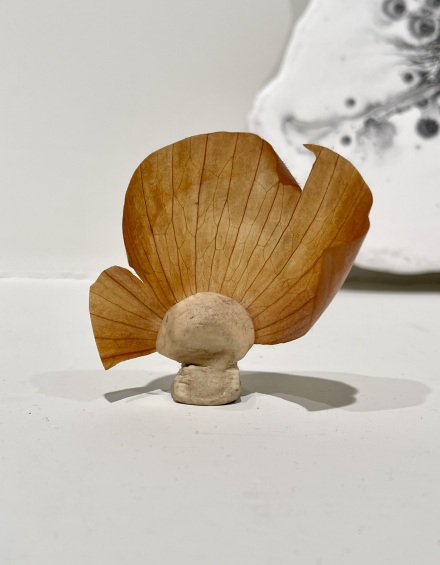 SPACETIME is an artwork of a new type, which cannot be defined, but rather expressed through the list of its components, carefully selected by the artist from the Gallery’s storage and his own personal collection. The paintings, drawings, and sculptures are the result of minimal yet precise gestures, and represent the fleeting moments in which aesthetic, theoretical, scientific, cultural, and material elements can merge or change one another. The conscious or unconscious interrelation across time between such works has become the subtext of the exhibition. Gabriel Orozco’s seemingly effortless stance is not without reminding that of the “Inframince”, a concept coined by Marcel Duchamp, and which refers to ephemeral phenomena – such as ‘the warmth that remains on a chair after a person gets up’, or as in his early photographs, the breath on the surface of a piano, or the bicycle streaks in a puddle. 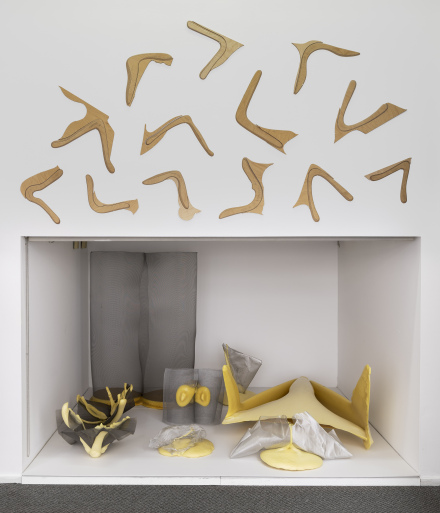 With 600 individual pieces brought together in this temporary 1,200 square foot time-capsule devoid of windows, Spacetime will remain on view through June 2023, further defying the ever-rapid turnover pace of gallery shows. The project, kept thus far in a state of secrecy, is a place one finds oneself wanting to come back to, to dig deeper into the meanings of its impermanence, and to further take in its all-encompassing beauty. 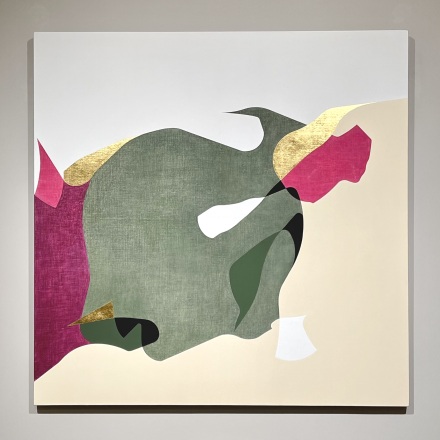 To conclude, here is an extract from the artist’s notebook from 1994, which can perhaps act as a tribute to Gabriel Orozco’s historical works on view, the works that are still in progress, and those yet to come, in unknown parts of the world: 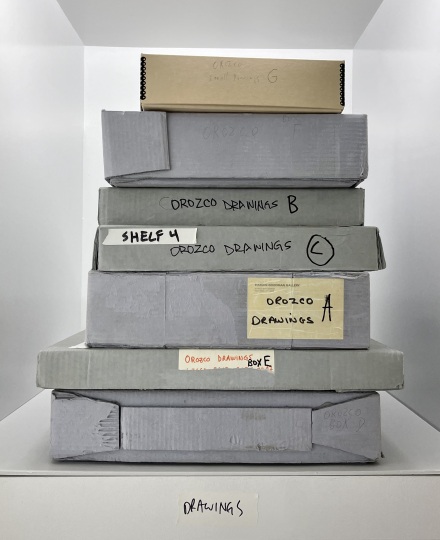 This entry was posted on Monday, May 16th, 2022 at 3:39 pm and is filed under AO On Site, Art News, Featured Post, Go See, Show. You can follow any responses to this entry through the RSS 2.0 feed. You can leave a response, or trackback from your own site.