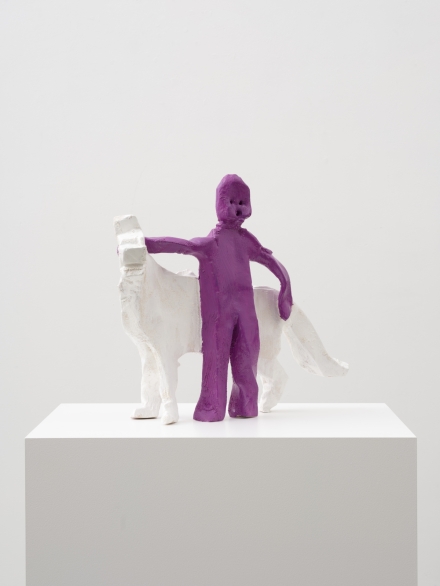 This month at David Kordansky’s Los Angeles gallery space, artist Valentin Carron presentss Barking Panting Sighs Heavenly, an exhibition of new sculptural works that continues the artist’s exploration of sculpture as a mode of representation, not only of the body and figure, but equally of relations and understandings of social and cultural construction. 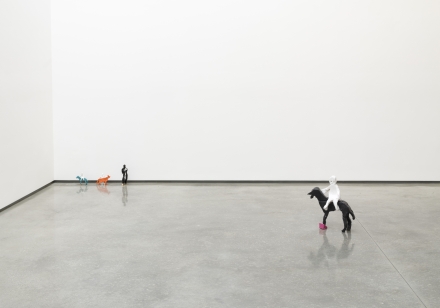 In Barking Panting Sighs Heavenly, Carron explores the romanticized loneliness often associated with the lives of artists. A group of sculptures in which humanoid figures are accompanied by dogs reflects his ongoing interest in motifs whose appeal is universal but whose roots are local or personal. He produced the forms using children’s modeling clay; after baking them in his home oven, they were scanned and then either robotically carved in wood or cast in aluminum at human scale. As some of their titles indicate, these figures are distinguishable as either adults or children, but show no other legible markers of identity. This allows them to be read as the products of a bare kind of expression that privileges directness and simplicity. It also allows them to resonate with a wide range of classical, contemporary, and vernacular representations that appear throughout the histories of art and literature. At the same time, its rawness is somehow both sordid and metaphysical—a reminder that artistic renditions of solitude can be as cheerless and matter-of-fact as they are poetic and spiritual. 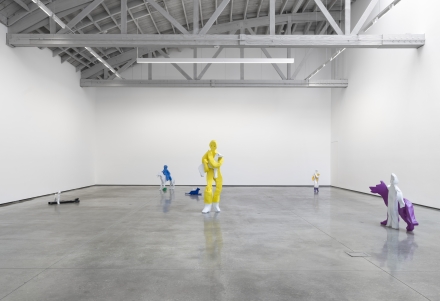 As in his previous works, Carron’s interest in techniques of material substitution persist; in this case, the transubstantiation of children’s modeling clay into aluminum and wood. If earlier projects found him employing such techniques to tease out questions about the fraught dynamics between authenticity, artifice, and kitsch in contemporary life and historical memory, here he adopts a more overtly reverent stance toward the development of sculptural forms throughout the ages. Instead of serving conceptual and appropriation-based aims, these processes are now representative of an earnest curiosity about the possibilities of rendering ancient forms using new technologies. 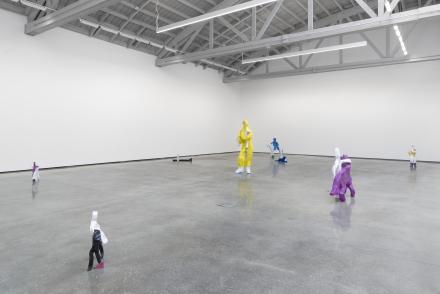 At the same time, the sculptures’ classical sensibility is emphasized by their scale and arrangement in the gallery, revealing additional layers of Carron’s interest in exploring primary influences and sources of artistic form. These include ancient Etruscan art, well known for its remarkable tradition of figurative sculpture, and in particular, for its elaborate sarcophagi for married couples, which depict the people buried within them. Carron renders his interspecies pairs with similar attention to the close emotional bonds and reciprocal care involved in such long-term relationships. Presenting these figures in a relation across time, both art historical and cultural, social and conceptual, Carron’s work makes for a striking transversal.

This entry was posted on Friday, July 1st, 2022 at 12:00 pm and is filed under Art News, Featured Post, Show. You can follow any responses to this entry through the RSS 2.0 feed. You can leave a response, or trackback from your own site.