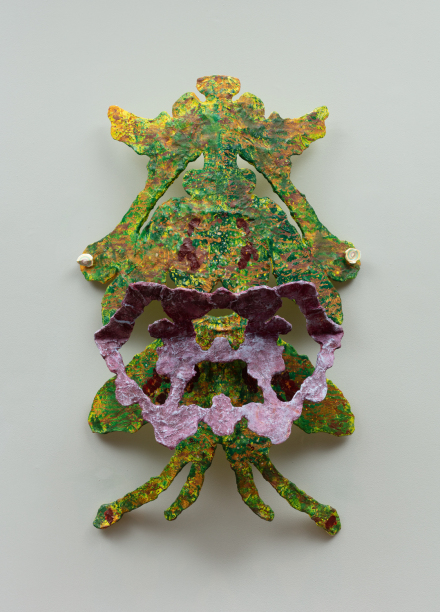 On view this month at 47 Canal, Brooklyn-based artist Ajay Kurian has produced a body of work that delves into the constructions of personality and place that underscore conceptions and understandings of home. Installing a body of works that concentrate on concepts of denial and assimilation, generational trauma and dislocation, the work on view this month takes a long route through the symbolisms and abstractions that underscore a conception of the body and self. 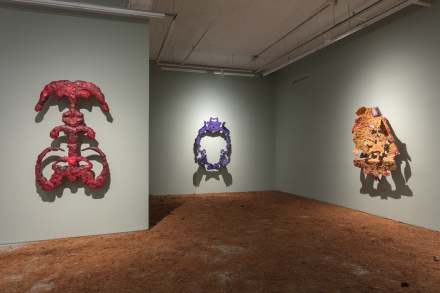 Suspended above a bed of fallen pine needles spanning 47 Canal’s gallery floor, the new sculptures that comprise Kurian’s “Missing Home,” began as daubs of paint—pressed, then smeared out according to the spill made by their own reflection. These impressions are outlined and translated onto sheets of foam-core, their extremities scored and curled into three dimensions and then fortified with plaster and fiberglass. Paint is applied as if to create a skin, with irradiating pleats of color—peacock, seafoam, tamarind, creating swirling effects and subtle alterations in intensity. 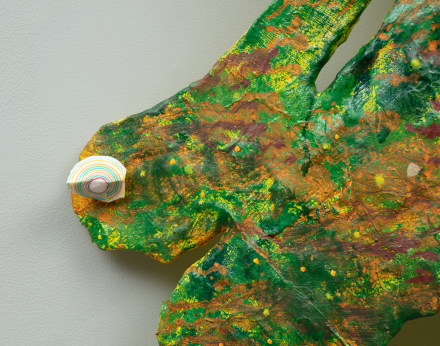 Kurian’s entities loom larger than the human form, their masses creating subtle sensations of a body suspended in space, something akin to an otherworldly entity or something spawned from mythological context, a notion lended additional weight through names like Tiresias, the blind prophet of Greek antiquity. These tensions of scope and scale are accented by miniatures and embellishments on the work’s surface, incorporating subtle narrative arcs, an unspoken personal impressions that add a mystery and deeply personal note to each of the works. 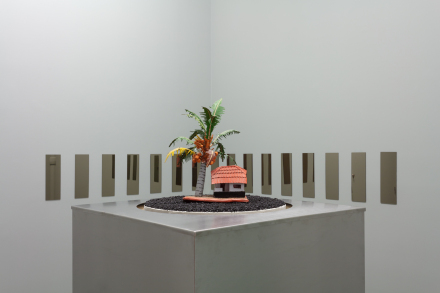 By contrast, the artist’s free-standing sculpture Death Related Sensory Experience, makes much of the immediate present: a mass of electric heat convects with the gallery’s temperature to produce the phenomenon known as a heat shimmer—a mirage, in which the eye-line between the viewer and the object at the center of the sculpture is spread, as if by some liquid force whose effects tug at the notion of a hazy, vanishing memory. The work becomes a mirage visually, an in turn, its emphasis on its own hazy construction creates a space in which the understanding of its moorings in reality become increasingly confounded. Are we viewing a memory, an illusion, a vision? Kurian seems perfectly content with letting the viewer decide for themselves.

This entry was posted on Friday, July 8th, 2022 at 12:00 pm and is filed under Art News, Featured Post, Show. You can follow any responses to this entry through the RSS 2.0 feed. You can leave a response, or trackback from your own site.