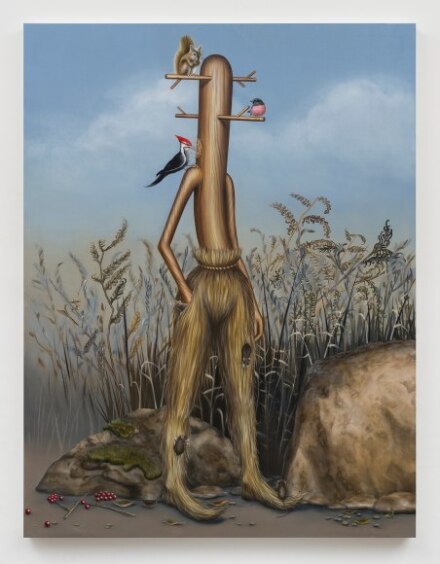 On view this month in New York, Petzel Gallery presents a series of new works by painter Emily Mae Smith, marking the artist’s debut solo exhibition with the gallery. The painter, who blends the surreal and cartoonish with a meticulous study of space and form to create otherworldly scenes that draw on tensions between the imagined and known world. 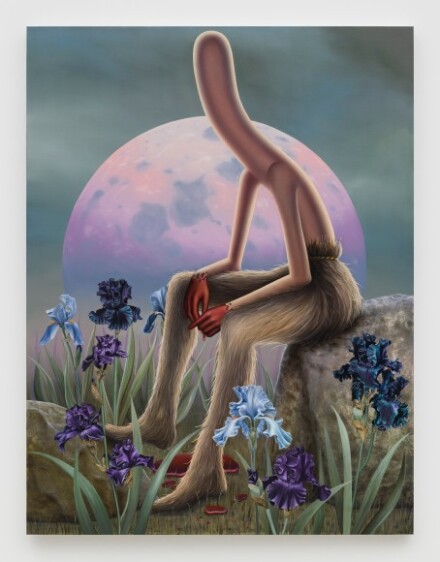 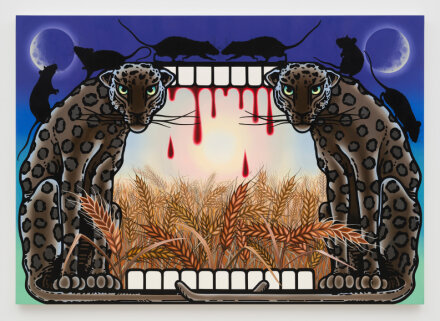 At the center of the show is the artist’s recurring broom figure, a descendent and referent of the famed character from Disney’s Fantasia. Here, the figure is repeated many times, posed amidst a series of varied contexts and backdrops. In Beholder, it sits atop a windowsill, gazing (ostensibly) out at the viewer, or just off the edge of the canvas. In Saint and Sinner, it is afforded a mouth and a jarring pair of eyes, creating a twist on the figure that turns it expressly towards a human form, albeit a distended a twisted one. In each, the figure enacts complex roles within elaborate pictorial spaces. Representation is suspended in a varying set of frames, like windows or proscenium curtains, each time emphasizing the body both as present and withheld from the viewer. They are optical fantasies, both establishing a dense visual landscape while also pushing the viewer to dive ever deeper into the environment. 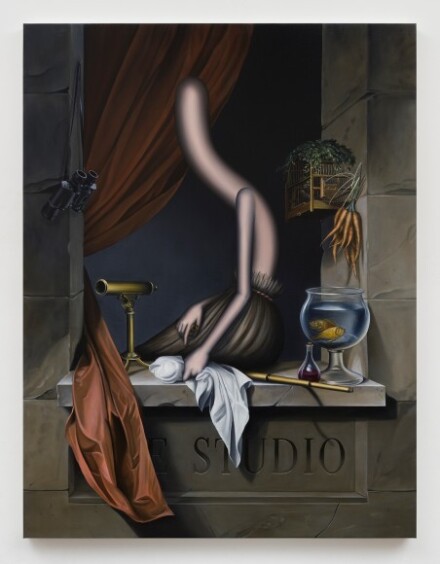 Other works draw on new vocabularies and structures to explore similar notions of the body in its relation to the world. Fear and Famine Redux, for example, is almost all framing, with a pair of leopards giving watch over a gaping maw dripping blood, which in turn frames a wheatfield extending out into the horizon. Smith’s work turns the canvas into a staging ground for these interactions of frame and body, the interlaid structures creating a network of signs and symbols that her figures and forms and then bound up in. We are as aware of the forms as we are at the act of looking, finding a constant negotiation between near-field and the endless horizons beyond. In others, where a central figure occupies the canvas, that same boundless questioning extends into the body itself. With the form commanding a central, yet cryptic narrative, the viewer is left to muse, to dig, and to wonder, on the truths lurking behind the canvas. 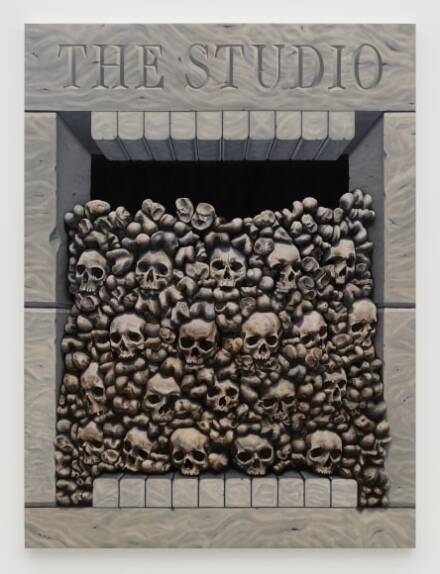 This entry was posted on Tuesday, November 8th, 2022 at 12:00 pm and is filed under Art News, Featured Post, Show. You can follow any responses to this entry through the RSS 2.0 feed. You can leave a response, or trackback from your own site.