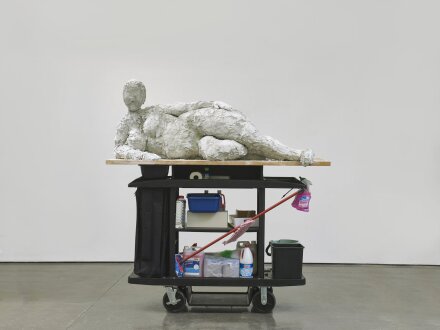 On view this month in London, Herald St presents P4aM2aRF!, an exhibition by Nicole Wermers taking place in the gallery’s East London location. Resembling a code or password, the acronymic title stands for ‘Proposal for a Monument to a Reclining Female!’ and alludes to the public realm and its interactions with the female body. The exhibition features two main groups of work: a new series of photographs of locked bicycles entitled Attachments, and three sculptures from the artist’s Reclining Females series. 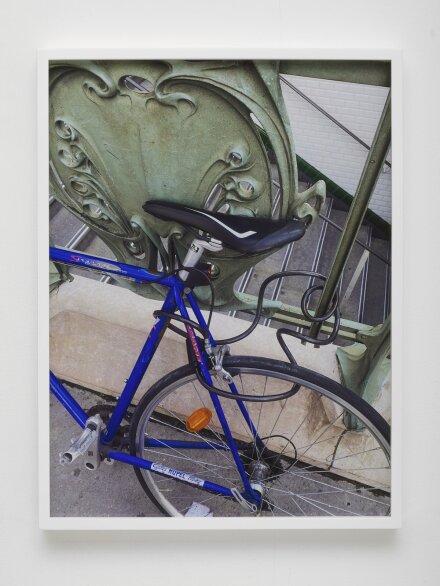 The show draws in particular on Wermer’s recent investigation of the female body, as well as engagement with the space itself. Drawing on the action of locking a bike, performed shortly before entering any space, the artist documents clusters and clumps of bike material; bicycles, chains, bolts, and wires in vibrant hues, set against grey grounds of roads and pavements. The clasps attach the vehicles onto various infrastructural elements including plastic construction barriers, streetlights, traffic signs, and the Art Nouveau entrances of Parisian metro stations, as well as to each other. They are portraits of urban engagement, shared space in an intimate setting that occasionally sees one’s property quite literally attached to another’s. 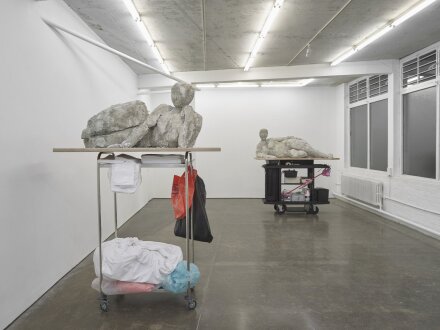 By contrast, three sculptures in the main gallery space renegotiate the reclining female, a motif inscribed in our cultural memory which has been depicted predominantly by male artists throughout art history. Wermers situates her lounging plaster figures upon modified maintenance carts. These objects from everyday life, used primarily in public areas, relate the working body to the architecture of narrow hotel corridors, airport lounges, and office buildings. In Wermers’ compositions, these utilitarian carts function as pedestals. Reclining Females are Wermers’ first figurative sculptures. Plaster, classically used for sketches and studies before being cast in bronze, is a deeply physical medium which requires the artist to work quickly as it dries and hardens within minutes. The work of housekeeping and other maintenance personnel carries its own time pressures; a hotel room has to be ‘done’ in thirty minutes or less. 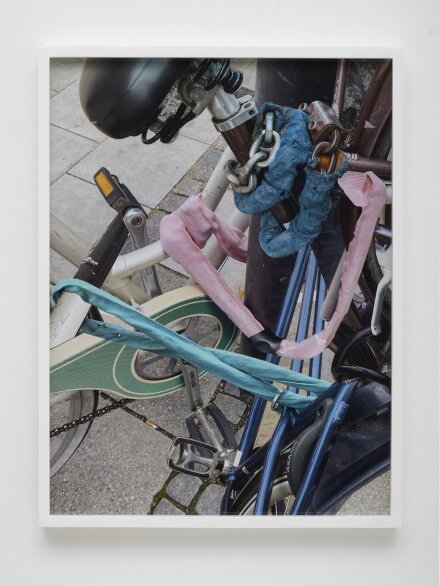 Drawing on several modes of engagement with the urban landscape, modern labor and the body, the show marks a striking continuation of Wermer’s incisive creative project.

This entry was posted on Tuesday, January 24th, 2023 at 8:21 pm and is filed under Art News, Featured Post, Show. You can follow any responses to this entry through the RSS 2.0 feed. You can leave a response, or trackback from your own site.