A piece in Town and Country this week documents the Frick’s takeover of the Met Breuer building. Director Ian Wardropper says the exhibitions at the newly renovated space will “remind people that the Frick is not just a painting collection.” END_OF_DOCUMENT_TOKEN_TO_BE_REPLACED

A piece in the collection of Pennsylvania’s Allentown Art Museum has been firmly reattributed as an official Rembrandt.  “It’s very exciting,” says museum VP of curatorial affairs, Elaine Mehalakes. “It was a painting that had been in good standing for three centuries, and this is really a reassertion of the attribution.” END_OF_DOCUMENT_TOKEN_TO_BE_REPLACED

In a recent public appearance, Ai Weiwei called China “the greatest challenge the West has ever faced,” referring in particular to the current political state of Hong Kong and its relationship to mainland China.   “This is not just a struggle between Hong Kong and China. It is a struggle between freedom and a sectarian state. Hong Kong represents a value we should all protect,” he says. END_OF_DOCUMENT_TOKEN_TO_BE_REPLACED

A piece in the New York Times documents the recent efforts to clean and restore works and spaces in the Louvre while the museum is shuttered under Covid restrictions. “For some projects, the lockdown has allowed us to do in five days what would have previously taken five weeks,” says curator Sébastien Allard. END_OF_DOCUMENT_TOKEN_TO_BE_REPLACED

Two rare pieces by Arshile Gorky and Wassily Kandinsky from the collection of the same private European owner, not seen publicly since the 1970’s, will debut at Sotheby’s modern and contemporary art evening sale in London on March 25, and are anticipated to reach a shared total of £3.7 million ($5.08 million). END_OF_DOCUMENT_TOKEN_TO_BE_REPLACED

Centre Pompidou Will Close for Renovations from 2023 to 2027 ↠

The Centre Pompidou in Paris will close for renovations in 2023 through 2027. “There were two options,” says French culture minister Roselyne Bachelot. “One involved renovating the center while keeping it open, the other was closing it completely.” Bachelot said that the latter option was ultimately more appealing because “it should be shorter and a little bit less expensive.”  END_OF_DOCUMENT_TOKEN_TO_BE_REPLACED

Leon Black, chairman of the Museum of Modern Art,  is leaving his role as CEO of Apollo Global Management, after news broke of his payments of over $150 million to the late Jeffrey Epstein. “I have advised the Apollo board that I will retire as C.E.O. on or before my 70th birthday in July and remain as chairman,” he said in a statement. END_OF_DOCUMENT_TOKEN_TO_BE_REPLACED

Around 700 artists are being evicted from their studios in Moscow following the announcement of a government renovation plan. “The lease contract drawn up by Moscow city has a clause stipulating that if the buildings are demolished, we cannot demand replacement studios,” says Yuri Kurshakov. “It’s hard to stomach because we’re not just talking about a few studios here, but entire clusters that will disappear.” END_OF_DOCUMENT_TOKEN_TO_BE_REPLACED

A piece in Town and Country documents the allegations against art advisor Angela Gulbenkian, who is alleged to have swindled dealers out of millions in sales, while spending the money. “I don’t think she was very active in the art market,” says Kenny Schachter. “It would be hard to find people who had dealings with her. She was more of an upstart.” END_OF_DOCUMENT_TOKEN_TO_BE_REPLACED

The collection of late Samsung Chairman Lee Kun-hee is currently being appraised after his passage last year. “Prices of some of the works have probably surged drastically since Lee purchased them,” says an anonymous source. END_OF_DOCUMENT_TOKEN_TO_BE_REPLACED 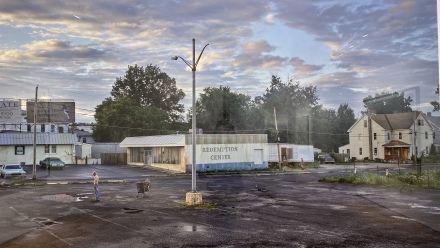 On view through this past weekend at Galerie Templon in Paris, Gregory Crewdson’s newest series, An Eclipse of Moths p[resents a series of sixteen large scale prints that act like portals into desolate American scenes. First released in 2020, a year that will be remembered for the stark political division and a health crisis that ravaged the country, Crewdson’s work here continues his reputation for cinematic visual languages, which he pursues with a large production team. He goes location scouting, and carefully lights his sets and directs actors as if they were in a film. His cohesive choice of four by eight foot prints allows the viewer to step back to grasp a grand scene that must be approached closely in order to take in the meticulous details, of signals and characters that, despite their distance, communicate with each other. END_OF_DOCUMENT_TOKEN_TO_BE_REPLACED 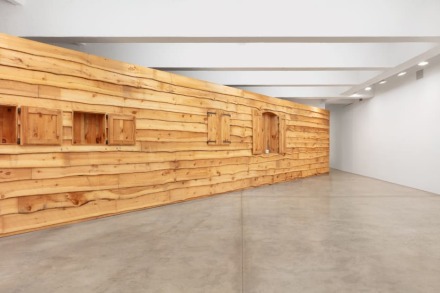 For more than four decades, artist Haim Steinbach has explored the psychological, aesthetic, and cultural aspects of collecting and arranging found objects, selecting items that range from the obscure to the ordinary, the private to the ethnographic and using them as a meditative element to emphasize notions of circulation and human connection.  For his most recent show at Tanya Bonakdar in New York, a selection of works on view highlights a concentrated three-year period in the artist’s career, and offers a recontextualization of his own historic practice and an occasion for reflection. END_OF_DOCUMENT_TOKEN_TO_BE_REPLACED 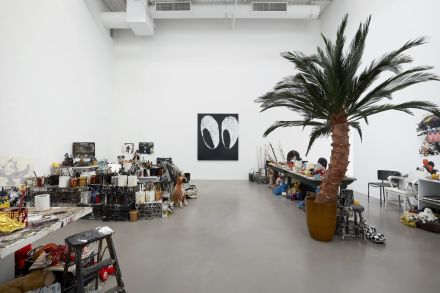 Marking the gallery’s first show of works by Joyce Pensato following the artist’s passage in 2019, Petzel’s current show, Fuggetabout It (Redux) marks a fitting summation and reflection on the work of an artist who long mined the languages of pop culture and mass media to create her supercharged mode of painting and sculpture.   END_OF_DOCUMENT_TOKEN_TO_BE_REPLACED 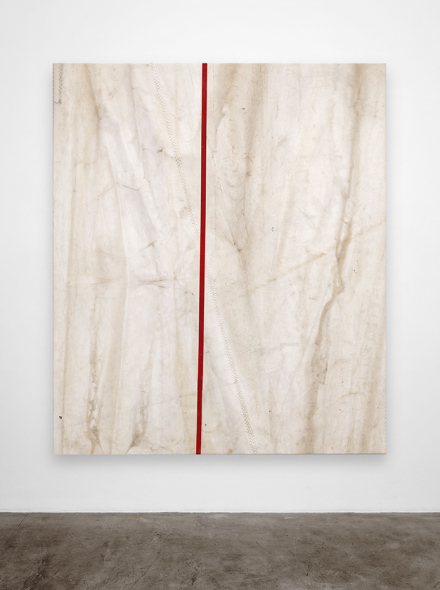 Currently on at Galerie Balice Hertling, although temporarily closed due to Covid-19, artist Alex Ayed has brought together a unique range of works exploring notions of travel, exploration and interconnectivity.  The show, consisting of a series of stretched sail works and a series of sculptural objects, draws on a range of notions regarding the passage of bodies, and the impacts it has on humanity’s conception of the world. END_OF_DOCUMENT_TOKEN_TO_BE_REPLACED 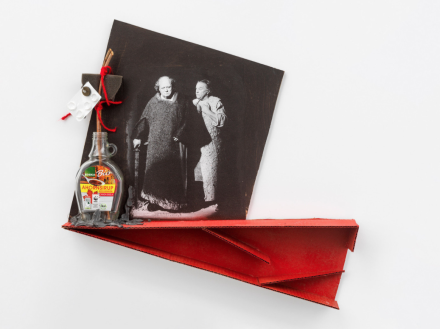 Taking on his tenth exhibition with Anton Kern Gallery, German sculptor and performance artist John Bock has turned towards a smaller scale, bringing out a series of 25 new three-dimensional collages that underscore his ongoing interests in the form and representation of performance and performers in modernity.  While constructed out of simple materials, these works contain the entire Bockian universe, twisting a range of signifiers and iconographies into concise statements.   END_OF_DOCUMENT_TOKEN_TO_BE_REPLACED 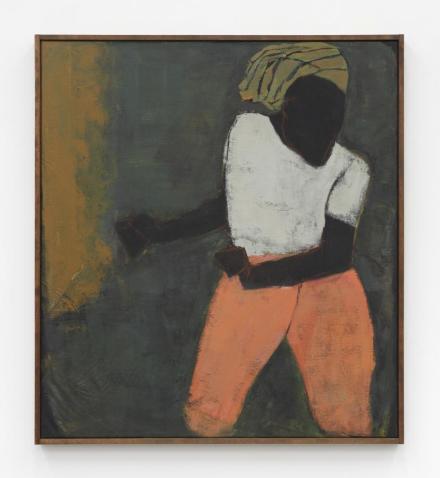 Currently at Karma, a string of minimal, subdued figures and landscapes stretch across the walls, dotting the gallery space with a string of delicately rendered scenes and situations.  The work is that of artist Reggie Burrows Hodges, marking his first exhibition in New York, and offering an introduction to his lyrical, singular approach towards the canvas.   END_OF_DOCUMENT_TOKEN_TO_BE_REPLACED 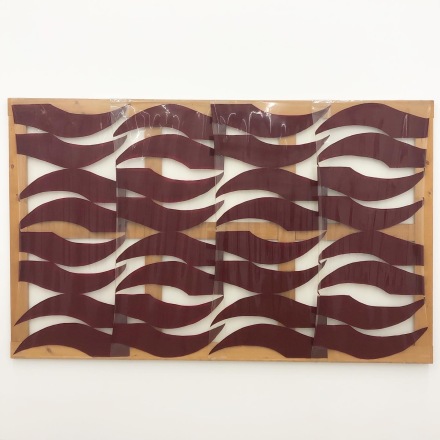 Embracing a unique conversation around texture and perception, 55 Walker, a space shared by Bortolami Gallery, Andrew Kreps and Kaufmann Repetto, presents an impressive dual artist show around the works of Carla Accardi and Elisa Sighicelli.  Mixing media and approach to impressive effect, the show marks an engaging exploration of varied approaches and presentations of shared aesthetic concerns.   END_OF_DOCUMENT_TOKEN_TO_BE_REPLACED 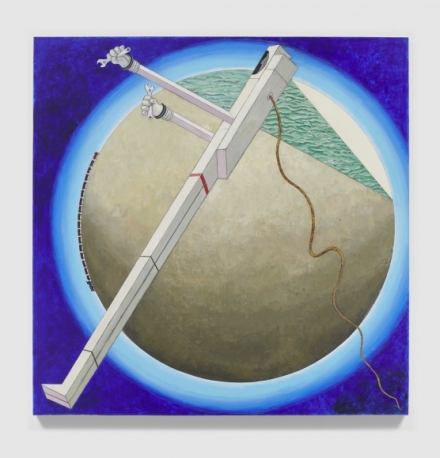 For over six decades, artist Mernet Larsen has created narrative paintings depicting hard-edged, enigmatic characters that inhabit an uncanny parallel world filled with tension and wry humor.  Employing a wry approach towards constructing spatial systems and relations between objects and bodies on the canvas, her pieces combine reverse, isometric, and conventional perspectives to pose everyday scenarios in a vertigo-inducing version of reality akin to our own. For her new exhibition at James Cohan Gallery in New York, the artist returns to her diverse array of graphical influences, drawing on the languages of art of the past as springboards for uniquely spatial figure-paintings that speak to the anxieties of the present. END_OF_DOCUMENT_TOKEN_TO_BE_REPLACED 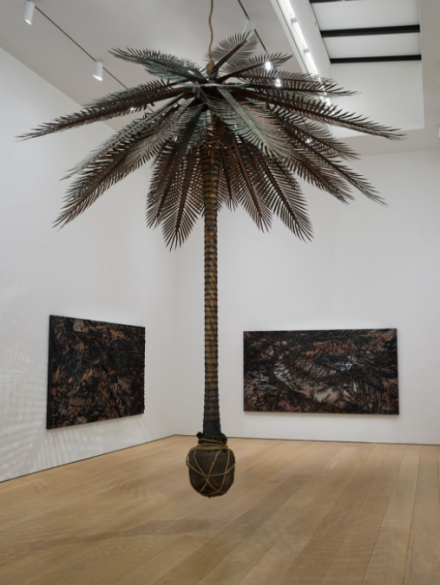 Taking over Lehmann Maupin’s New York exhibition space, artist Teresita Fernández’s new show, Maelstrom, focuses on a new series of monumental sculptures and installations that unapologetically visualize the enduring violence and devastation ignited by colonization.  Turning particular attention to the Caribbean archipelago, the first point of colonial contact in the Americas, Fernández challenges the viewer to consider nuanced readings of people and place, looking beyond dominant, continental narratives to instead consider the region as emblematic of an expansive and decentralized state of mind. END_OF_DOCUMENT_TOKEN_TO_BE_REPLACED 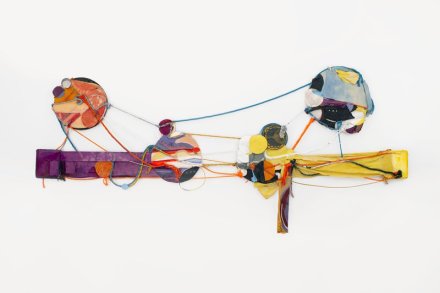 Currently on view at Canada Gallery in New York, Tracing Memory, the debut exhibition by artist Rachel Eulena Williams sees the artist striking a balance between painting and sculpture, reveling in the structure and propositional space of painting while working freely against easy classifications or limitations.  Discarding a reliance on stretchers in favor of works that roam freely across the walls and set up unique geometric conversations in space, the artist’s work is a fascinating first offering at the gallery. END_OF_DOCUMENT_TOKEN_TO_BE_REPLACED