January 17th, 2022
REFERENCE LIBRARY
Home » Corey McCorkle: When a Dog Barks the Response in the Ear of the Sky is a Star

Corey McCorkle: When a Dog Barks the Response in the Ear of the Sky is a Star 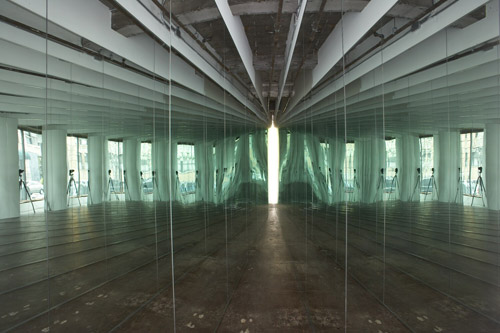 Much like its title, Corey McCorkle’s current show initially strikes one as cryptic. Sparingly, he scatters a series of remnants across Maccarone’s cavernous West Village space: one room contains architectural photographs of an abandoned zoo, in the adjacent one, a looping video projects images of wild dogs roaming the overgrowth, and around the corner, down a narrow hallway, we come to a mirrored passageway that funnels to a point and creates endless, dizzying reflections. The overall effect is oblique but somehow uncanny, as abandonment haunts these commonplace sites, transforming them into pseudo-romantic ruins: the empty cages, the barren fields, the howling of dogs. And as the sense of desolation grows, so does the show’s subtle but insightful effect. 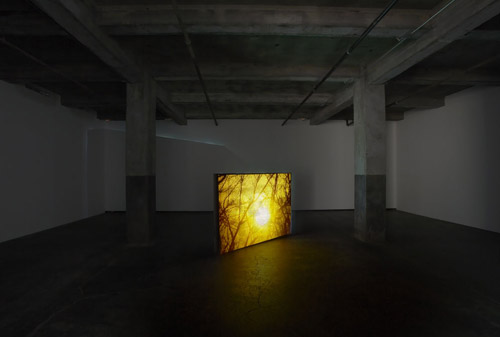 The press release notes that the project documents an abandoned zoo on the outskirts of Istanbul which, like much other development planned for the city, was never completed. Like in his previous work, McCorkcle turns this historical tidbit into a sustained meditation on derailed utopic possibilities. Not quite a ruin, the zoo emerges as a relic of an optimism that never came to fruition. The show expertly explores this failure, unlocking its melancholy with subtle details: the photographs of unoccupied cages, sometimes little more than black voids, the cast concrete wall filling the screening room with the scent of drying cement, and the endlessly receding horizon of the hall of mirrors. Alone, each of these gestures might seem trivial, but together they create a shifting interplay between the local and the abstract, between what is imagined and what can be realized. Evoking the language of the Romantics (especially Caspar David Friedrich), McCorkle’s tightly edited presentation also enters into dialogue with Bruce Nauman and Tacita Dean, other notable archeologists of our present. And in poignant silence and voids, he manages to capture the wistful traces of a future which never came to pass.  —Franklin Melendez

This entry was posted on Sunday, April 15th, 2007 at 12:28 pm and is filed under Art News. You can follow any responses to this entry through the RSS 2.0 feed. You can leave a response, or trackback from your own site.