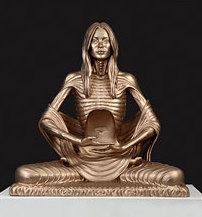 This month and next, British sculptor Marc Quinn brings his most recent exhibition, “Sphinx,” to New York’s Mary Boone Gallery. Known best for creating busts out of frozen blood and sculptures that depict the limbless, Quinn tackles a new form in Sphinx. Attempting to comment on mortality alongside divinity (each work in the exhibit is titled after a different Greek god or goddess), Sphinx features a collection of sculptures of supermodel Kate Moss, each twisted into a different Yogic position.The piece titled “Sphinx (Road to Enlightenment),” perhaps the exhibitions stand-out work, is unpainted bronze, unlike the majority of painted sculptures, and portrays Moss in a Buddha-like position, complete with robes and an exposed ribcage. Other sculptures feature Moss in a less overtly religious, yet equally posed form. 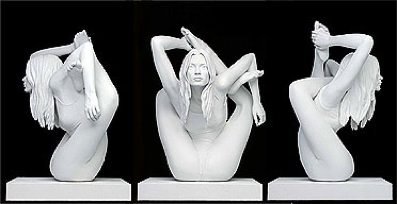 “These hollow bronze sculptures, de-materialized by white paint,” explains Quinn, “are like eggshells or cinema screens to me, sites for the projection of our desire, twisted mirrors to ourselves.”

Quinn recounts that his fascination with Moss and his decision to center the entire exhibition around the supermodel stems from the fact that Moss is “someone whose image has completely separated from her real self and this image has a life of its own.”


“Sphinx” will run at the Mary Boone Gallery through June 30. — Andrew Eisen

This entry was posted on Saturday, May 12th, 2007 at 11:34 am and is filed under Art News. You can follow any responses to this entry through the RSS 2.0 feed. You can leave a response, or trackback from your own site.