The Philosophy of Andy Warhol (From A to B and Back Again)
(Andy Warhol, 1977)
Read More and Buy↠
Home » Warhol’s “Car Crash” rakes in green 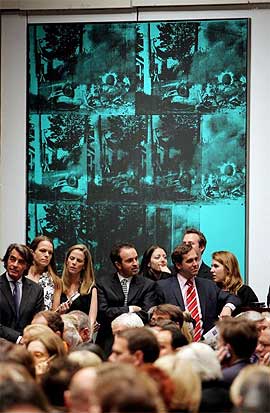 On a cloudy day in May, in a drab gray room in Rockefeller Center, three hours ticked by at a normal pace. Within these 3 three hours, nearly $400 million worth of postwar and contemporary art was sold at the Christie’s auction house Wednesday evening. Only one day before, the post-war and contemporary art auctions at Sotheby’s closed at a grand total of $255 million, enabling the two-day total sales in Manhattan alone to surpass a cool half-billion dollars with ease. The undoubted financial star of Christie’s evening was Andy Warhol‘s silkscreen painting “Green Car Crash (Green Burning Car I).” Inspired by a 1963 Newsweek photo depicting a car crash that impaled one driver on a telephone pole, the painting ignited a heated bidding war between two parties, urging bids to as high as $64 million.

Despite the best efforts of mega-dealer Larry Gagosian, the painting ultimately sold to an unidentified telephone bidder for $71.7 million, more than $35 million higher than Christie’s estimated sales value. 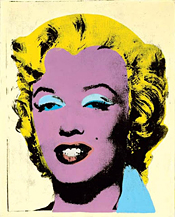 This particular sale set the record for the most retrieved by a Warhol painting. The Pop-Art king experienced unsurpassed popularity that night, with other works selling like diamond studded hot cakes making Christie’s appraisers seem like timid church mice. “Lemon Marilyn“, one of the artist’s classic paintings of Marilyn Monroe, estimated to sell for $18 million, sold for $28 million instead. However, Warhol was not the only king of the absurdly high price tags.

When the night had ended and the dust had cleared, records had been set for a total of 26 artists. Though claiming a lower sales total, Sotheby’s auction did set perhaps the most impressive record as it sold David Rockefeller‘s Mark Rothko piece entitled “White Center (White, Pink, and Lavender on Rose),” for $72.8 million. 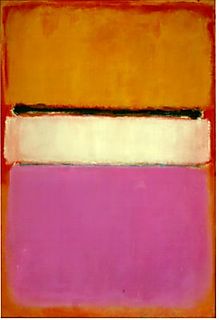 Rothko’s work will now be known (at least in the immediate future) as the highest price ever paid for a piece of modern art sold at auction. Though potentially overshadowed by Rothko, Christie’s isn’t crying. Beaming, their auctioneer hammered away as a lesser known piece by the Latvian-born American artist was claimed for a neat $25 million, $5 million more than expected. And on top of the commission Christie’s receives for each sale (20% of the first $500,000 and 12% of the rest of the work’s sale price), they have a lot to smile about. –Andrew Eisen

This entry was posted on Saturday, May 12th, 2007 at 10:09 am and is filed under Art News. You can follow any responses to this entry through the RSS 2.0 feed. You can leave a response, or trackback from your own site.