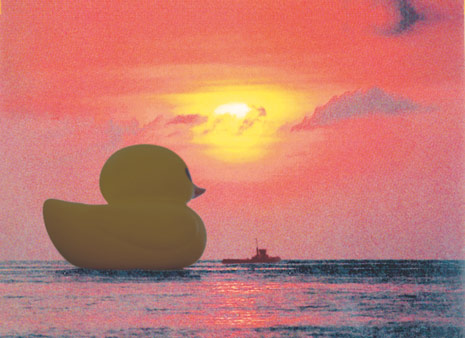 Once a center of naval activity, the newest and certainly most eye-catching bateau on France’s Loire estuary is armored with a shell of mirrors, reflecting the riverbank’s factories, natural marshes… and resident gigantic floating plastic duck? Florentijn Hofman’s “Canard du Bain”, a titanic incarnation of every child’s favorite yellow bath time friend is absurdly placed within a dingy, industrial habitat. A cartoon-like beacon, the river-bound sculpture injects a certain lightheartedness into the milieu. If it were not so innocent looking, its size would suggest that it could wipe out a nearby cluster of sailboats in a single gulp.

But this 82 ft tall yellow rubber ducky isn’t the only oddity integrated into the 40 miles of land and water connecting Nantes with the downstream Saint-Nazaire. Since this June, the maritime landscape has become a geographic canvas for 30 contemporary artists to install an array of monumental sculptures. I found myself on this shining silver vessel on a tour of Estuaire 2007, the brainchild of curator Jean Blaise. Blaise is the director of the avant-garde art center in Nantes, “Lieu Unique”. In the first of what will become a biennale art event, the selected installations were designed to transform the public landscape, in line with the urban renewal efforts and notorious joie de vivre flourishing throughout the city. 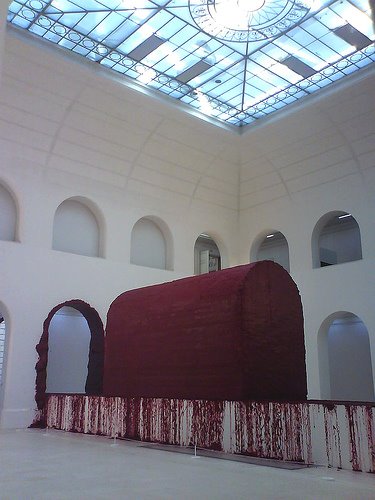 Whether on a rooftop, in the river or on the marsh, most of Estuaire’s works speak to the expanding boundaries of art. Yet oddly enough, the most celebrated artist of the group, Anish Kapoor, has installed his sculptural piece in the most obvious and conventional of places: the local museum. I had to disembark my floating river tour and reacquaint myself with dry land to venture to the Musée des Beaux-Arts, where Kapoor has consumed the entire ground floor to house a colossal sculpture of glacial ancestry. Creeping at an indiscernible rate of 3mm per second through the architectural space, a 15-ton block made of red wax slides along a track through the length of the museum. The pliable material, molded in the shape of the archways through which it periodically squeezes, leaves a saturated red wake throughout the snow white museum that is heart stoppingly reminiscent of a blood bath.

Appropriately so, the title of the work is “Svayambh”, which when translated from Sanskrit is understood as “shaped by its own energy”. Indeed, Kapoor’s sculpture does have energy of its own as it is constantly evolving, imposing its saturated pigment onto the museum’s blank void. In a typical Kapoor style, his use striking use of color, material and site-specificity is as dramatic as it is memorable.

Other notable works include Jean-Luc Courcoult’s “Maison de la Loire”, a surreal replica of the inn at the harbor town of Layau. Half submerged in the marshes of the Loire, smoke still rises from the chimney of this empty ghost house. Daniel Buren & Patrick Bouchain’s “Les Anneaux”, which is best viewed at night, is also a memorable sight. When the sun sets, illuminated red, blue and green neon rings slice into the earth and sky with their circular frames.

The 2011 Toyota Prius occupied the role of fuel-efficiency heavyweight champ with a combined average of 50 mpg. The 2011 Volkswagen Jetta TDI represented diesel vehicles while the 2011 Honda CR-Z exemplified the interests of performance-oriented hybrid shoppers. The 2011 Ford Fusion Hybrid rounded out the test as a full-hybrid sedan that achieves a combined 39 mpg rating. go to site ford fusion 2013

All vehicles in the 2011 Fuel-Efficient Car Comparison Test were evaluated during a single day on a driving loop that featured twisty rural roads, coastal highway, expressway and a climb from sea level to 1,500 feet of elevation. go to site ford fusion 2013

This entry was posted on Saturday, June 30th, 2007 at 3:15 pm and is filed under Art News. You can follow any responses to this entry through the RSS 2.0 feed. You can leave a response, or trackback from your own site.