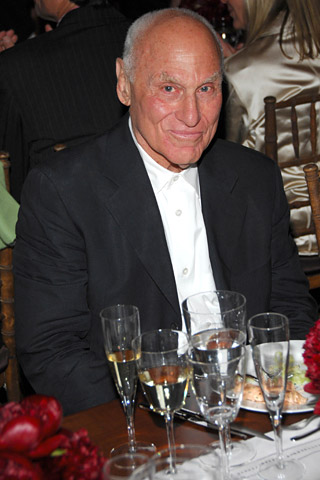 Running June 3 – September 10, The Museum of Modern Art’s retrospective exhibit of the work of Richard Serra brings forty years worth of sculpture, often gigantic, to the museum’s forefront. On Tuesday night, LVMH hosted a dinner in honor of the new MoMA’s most ambitious sculpture exhibition to date. The opening of Richard Serra Sculpture: Forty Years drew over 500 guests to the midtown museum. Among them were painters Brice Marden, Frank Stella, and Chuck Close and a clutch of connoisseurs in the form of Larry Gagosian, Veronica Hearst, and Lily Safra. Beginning at the inception of the artist’s career in the late 1960s, the exhibit features his work with nontraditional materials like neon, rubber and lead, and moves chronologically through the many phases of Serra’s sculpting. 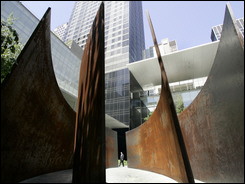 His large-scale works like 1993’s “Intersection II” and 1998’s “Torqued Ellipse IV” play with the notion of landscape and setting. The enormity of the exhibition, spanning not only years, but also multiple floors and a sculpture garden, excites the artist; “to bring that work together in one place,” explains Serra “would enable anyone going there to understand its evolution.” 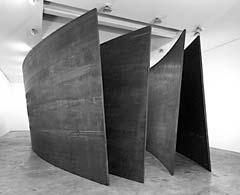 Though his work is frequently thought of as site-specific, Serra is not concerned about losing its impact. “You can go anywhere you want, but” Serra adds, “anywhere you turn you are within the volume not only of the encapsulating architecture but of the field that unfolds as sculpture. The entire field becomes one of sculpture, as you’re spun into and out of the different pieces.”
“Forty Years” will also include three new works created in 2006 specifically for the MoMA’s show.

Visteon will begin supplying the next-generation Acura MDX with the modules in 2007 in a contract that one industry forecasting firm estimates to be worth $30 million a year.

Van Buren Township-based Visteon, which was forced to seek a financial bailout from Ford Motor Co. this year, is moving deeper into business dealings with Honda, an automaker renowned for its stern scrutiny of suppliers.

The award also puts Visteon into an auspicious position: The MDX SUV platform is shared by the big-volume Honda Pilot SUV. Honda will begin awarding supplier contracts for that nameplate’s next generation later this year.

Visteon’s module is part of an interior redesign and may combine parts currently supplied by Nippon Seiki Co. Ltd. of Japan and Intertec Systems L.L.C. Intertec is a North American 50-50 joint venture between Johnson Controls Inc. and Inoac Corp. of Japan. The Visteon component also may displace content currently made in-house by Honda.

A spokesman for Honda of America Manufacturing Inc. in Marysville, Ohio, which manages North American purchasing, declined to comment on future MDX plans or to discuss what will become of the suppliers to the current program.

- Crain News Service ITC Holdings to go public A Novi-based electricity transmission company with $519 million in debt plans to go public this week with hopes of raising $42.8 million through the initial public offering.

ITC Holdings Corp. plans the offering this week, according to Renaissance Capital Corp., which tracks public offerings and operates ipohome.com.

The company owns and operates about 2,700 miles of power transmission lines from Huron to Monroe counties.

Raleigh will have responsibility for operations relating to the company’s Volkswagen of America and Comerica Inc. accounts. She was formerly the director of facilities management for Johnson Controls Inc. in Milwaukee.

Pricing is not yet set, but the Patina Place project calls for units with first-level work space and upstairs lofts. A fall groundbreaking is planned, said Linda Lintner, Dorian office manager. Dorian plans to raze its former Madison Heights office building to make way for the project. Dorian moved its offices to 1731 E. 11 Mile Road in Madison Heights.

The grocery store will feature organic and specialty foods, and is described by MJM Group as a cross between Whole Foods Market and the former Merchant of Vino grocery chain. Merchant of Vino was owned by Jonna’s family until 1997, when it was sold to Whole Foods, and has since closed.

The Livonia-based auto supplier is moving from two buildings with a total of 38,000 into one building on West Tech Drive with about 37,000 square feet. The new location will open this year, he said.

This entry was posted on Friday, June 1st, 2007 at 6:43 am and is filed under Art News. You can follow any responses to this entry through the RSS 2.0 feed. You can leave a response, or trackback from your own site.