A Unique Creed: Excrement in Exhibition

On display through September 16th at Bard College’s Center for Curatorial Studies is “Feelings,” the latest exhibit produced by British artist Martin Creed. Creed is the same artist who caused a stir in 2001 after he received the Tate’s Turner Prize for his “Work No. 227: Lights Going On and Off,” a piece that incorporated a given space that may or may not contain his art, complete with lights that are set to go on and off at regular intervals. “Work No. 227″ can be viewed now at Bard’s Hessel Museum of Art, which contains a collection of Creed’s own work interspersed with the Hessel Collection’s older pieces that seem to influence Creed’s craft. 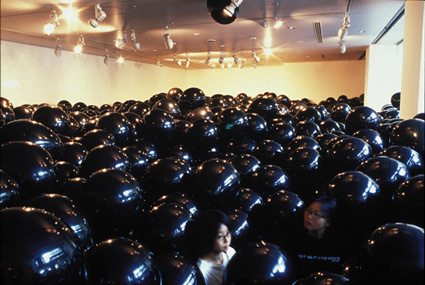 More controversial is the exhibition’s inclusion of two videos. Both are set in a completely white space, into which a person enters and either vomits or defecates before walking away. Creed’s “Work No. 628: Half the Air in a Given Space” fills half a room (eight-feet high) with balloons that respond to the viewer’s every move.

“Feelings” also features over 100 of Creed’s works that include paintings, sculptures, drawings and music. --Andrew Eisen

This entry was posted on Wednesday, July 18th, 2007 at 2:01 pm and is filed under Art News. You can follow any responses to this entry through the RSS 2.0 feed. You can leave a response, or trackback from your own site.