In Matthew Monahan’s signature sculptural assemblages, wax, paper and plastic take on barbaric forms of bodies and faces. They are then smothered and captured in perfect glass cases or teetering precariously in open air on primitively constructed pedestals made of shoddy materials. Two-dimensional charcoal drawings are crumpled and manipulated into a three dimensional form. Their gray surface gives the illusion of heavy stone, juxtaposed with the reality of the feather-light paper.

Monahan’s sculptures often feature enormous faces, expressively twisted and folded in a lawless Origami. Their enigmatic expressions loom and haunt, invoking references to the archaic heads of Easter Island. Monahan’s pedestals of cheaply constructed drywall are the precarious foundations for his visually richer assemblages of shards and scraps gathered and displayed by geometrically severe glass cases. Worthless materials are glorified in the classic pedestal-object formation, mocking their own display as art objects. Fragmented bodies and folded faces evoke corporeality as a central theme in this diverse collection of mixed media. The heavy handed materiality of his objects are a fucked up incarnation of Brancusi, your local mayor’s bust of bronze or a crusty little totem on display at the Natural History Museum. These questions are at the core of postmodern art, issues of the object and its perceived substance, method of display, solicitation of reverence and historical perspective. 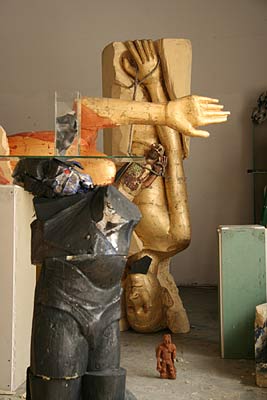 However, Monahan seems to prefer a reading that engages viewers on the sheer physical energies of his object creation. In his artist’s statement accompanying the 2005 Anton Kern show, he wrote, “The work is not a postmodern selection of references to be decoded, but a bodily expulsion of influence and impulse performed in the act of making.”

Thus work of California native Matthew Monahan, 35, will be exhibited in his first solo museum show, opening at the L.A. Museum of Contemporary Art on July 26. The exhibition is comprised of a decade of work, and attempts to describe the evolution of this artist’s work as he simultaneously deals with issues of the human body, materiality and the art object. Monahan has shown work in the Whitney and Berlin biennials. His two primary galleries, Anton Kern Gallery in New York City and Galerie Fons Welters in Amsterdam have also been centers of his emergence. The exhibition will be on display through October 29, 2007. –Robyn Migliorini


This entry was posted on Thursday, July 26th, 2007 at 2:01 pm and is filed under Art News. You can follow any responses to this entry through the RSS 2.0 feed. You can leave a response, or trackback from your own site.