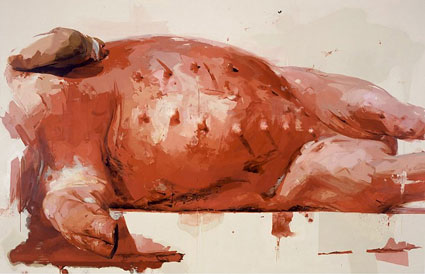 Gagosian Gallery has announced “Summer Show,” a group exhibition featuring work by Tom Friedman, Douglas Gordon, Damien Hirst, Mike Kelley, Alec Soth, Franz West, and Jenny Saville, all chosen for their emphasis on the physical form. While possessing an affinity for the monumental, Jenny Saville’s work dominates Gagosian’s Summer Show both in terms of size and talent. Saville has been recognized as one of the most thought provoking and technically accomplished talents of her generation. Characteristic of Saville’s work, her paint becomes flesh as it evokes the feel and touch of the body, its smell and material presence.

After a visit to her brother’s farm in England, Saville found and photographed the corpse of a dead pig. The outcome of her photographs was Suspension, a painting of a slaughtered pig with its bloated stomach splayed across a huge canvas overtaking Gagosian’s back wall. The subject matter explodes out of the canvas and into the viewer’s physical space. Saville is known for paintings of grotesques in which she exploits the organic qualities of paint that compose her semi-abstract corporeal figures. She calls herself a ‘scavenger of images’ as she prefers to work from photographs rather than living models. Saville shares this fascination for collecting pictures with Francis Bacon, as they both cover their studio walls with images found in old medical journals of bruises, scars, gun shot wounds, pictures of deformities, and traces of disease which leave inscriptions on a body over time, like a memory, or a mark on a canvas.

Marked by broad, swift brush strokes, Suspension is firmly rooted in the physical world of blood and decay. Her expressionistic style is characterized by her paint handling, in which she is able to loosely but expertly render a physical form. Saville is also a notably intuitive painter, as she allows for drips and areas of transparency to remain in her finished pieces. Reminiscent of the paintings of Chaim Soutine, Saville was drawn to this subject matter because of her interest in the medical world’s use of pig organs for human transplant as well as cloning. With Saville’s handling, this potentially revolting subject is disturbing yet glorious.

The Sunday Herald January 28, 2001 | Ian Fraser; and Kenny Kemp THE skills shortage in Scotland is now so acute that five of Edinburgh’s largest companies – including Royal Bank of Scotland and BT – have joined forces to launch a unique welfare-into-work initiative.

The move comes as Wendy Alexander, the enterprise minister, prepares to unveil Scottish Enterprise’s latest initiatives on Tuesday which will place Scotland’s desperate need to up the ante on building a skilled knowledge-based workforce at the forefront of the political debate. Last night she told the Sunday Herald that a new unit, Future Skills Scotland, will help fit job vacancies more directly to the workforce. web site dish network careers

“Skills shortages are the enemy of a vibrant economy. The new unit will play a major part in pulling down the barriers which prevent contact between employers and recruits with the right skills,” she said.

Alexander says the skills shortage is Scotland’s major challenge for the 21st century. She has announced that 80 training and career quangos will be abolished and replaced by 17 attached to the regional enterprise network. Careers Scotland and the skill-seeking services will be reorganised with an extra #26 million over the next three years – in tranches of #8m, #8m and #10m a year.

But the private sector, alarmed by a worsening situation, has taken a lead and the Pool Charitable Trust, due to start at Easter, will become the first venture of its type in the UK. It has been closely modelled on Welfare-to-Wall Street, an initiative in New York.

The Pool’s five private sectors backers – Royal Bank, British Telecom, ICL, FI Group and TelesensKSCL – all have premises at Edinburgh Park but have been struggling to find staff. The aim is to match the longer-term unemployed with the jobs requirements of participating employers.

Peter Selman, inclusion team leader at Scottish Enterprise Edinburgh and Lothian, and the Pool project’s co-ordinator, said: “The initiative is aimed at two client groups. First there are the financial services and IT employers at Edinburgh Park, for whom we will be acting as a direct training and brokerage service. These companies are facing an acute labour shortage.

“Secondly, it is aimed at the long-term unemployed themselves. The whole project is based on the idea that companies will be offering a guaranteed job at the end of it, and that this will be at a salary level to make it sufficiently attractive to engage people and change their attitude towards training.” Selman added: “Without being geographically partisan, we are likely to be targeting the long-term unemployed in social inclusion priority areas, which include Wester Hailes, Craigmillar and North Edinburgh [Pilton and Muirhouse].” The initiative is described as the first demand-led project in the UK that successfully fuses welfare-to-work with lifelong learning under one roof.

By offering customised welfare-to-work training to meet the recruitment needs of specific employers, Pool will save them large amounts of money on recruitment and training. Training will also be provided to help existing workers upgrade their skills.

A pilot scheme on behalf of FI Group will enable 15 people from the government’s New Deal programme to gain Higher National Certificates in computer programming. These individuals are being groomed for jobs at the Edinburgh Park-based computer outsourcing specialists. The pilot was booted up in January 2000 and will be completed in April. go to web site dish network careers

The Royal Bank of Scotland is also understood to have run a pilot programme to recruit branch staff. Selman said that, once the Pool initiative is up and running, it should accommodate 300 trainees each year.

The Pool will be housed in the Clocktower, a building adjacent to Edinburgh Park, but it may move on to the business park once a new building – for which an architectural competition is currently under way – has been completed. Selman added that some of the recruits may feel intimidated by the “glass and steel palaces” at Edinburgh Park. Part of the training will involve getting them acclimatised to the corporate environment.

Funding applications have been sent into the New Deal Innovation Fund and the Scottish University for Industry. The Pool also aims to provide social support such as childcare and transport.

In Welfare That Works, a pamphlet published by left-leaning think- tank Demos, David Pinto-Duschinsky, a member of the New Deal task force, argues in favour of demand-led schemes that bring employers together to solve their own skills shortage problems – along the same lines as the Pool.

This entry was posted on Monday, August 13th, 2007 at 8:11 am and is filed under Art News. You can follow any responses to this entry through the RSS 2.0 feed. You can leave a response, or trackback from your own site.