Rev your engines and strap on your gasmask, Aaron Young is uptown 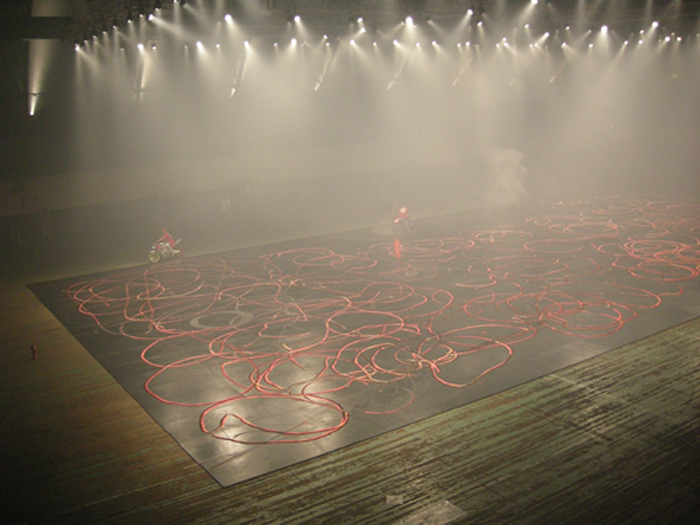 AO got inside the exclusive 500-invitee motorcycle performance last night at the Park Avenue Armory. The full size arena-like open space was covered with 288 panels, layered seven times with neon paint and a topcoat of rubber. The stunt riders created burnouts on the surfaces with donuts and paths choreographed by artist Aaron Young. The audience was provided with gas masks to avoid the exhaust during the seven-minute performance, and the sound of screeching tires and whirring engines was an overload for the senses. Photos of the event after the jump. 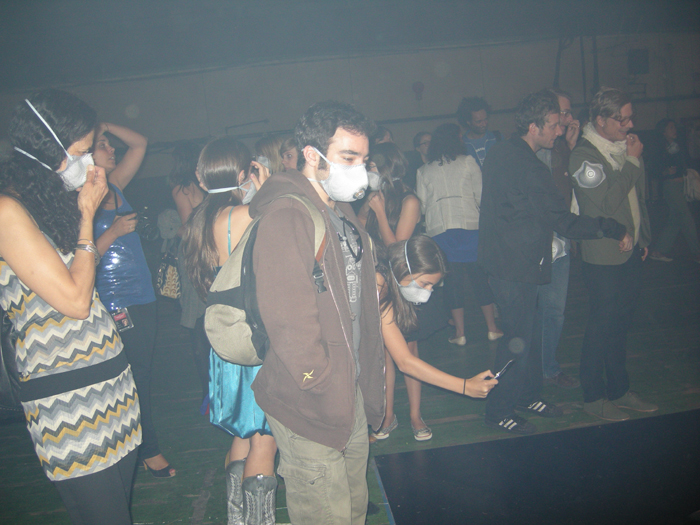 Young’s more concise work gives off a slightly “rockstar” vibe evoking black, shiny, metal, and gears grinding in the vein of Jutta Koether. But his strongest work is large conceptual installations, often occurring within a limited period of time. Young was exhibited at Miami Basel last December; a shipping crate was pierced with a small hole while tons of sand was continuously piled on top of it, creating an ever increasing mountain of sand, a human scale hourglass. 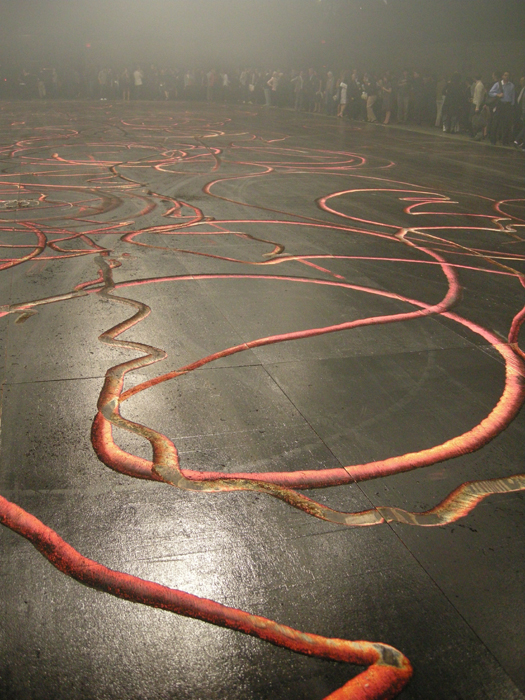 Nordstrom, the Seattle-based, upscale department store chain, began as a shoe store nearly 100 years ago. The company, known for its emphasis on customer service, has 108 stores in 23 states.

The two-level, 172,000-square-foot store is scheduled to open Aug. 11 in the FlatIron Crossing mall in Broomfield, four years after the first Colorado store debuted in the Park Meadows mall in Douglas County. The FlatIron Nordstrom will be the 100th store in the chain.

A third store is still on the drawing board for Cherry Creek shopping center, possibly opening by 2003, said Tim Gary, regional manager for Nordstrom.

However, that proposal is still being discussed by neighborhood groups, Cherry Creek owner Taubman Co. and Safeway. Taubman is advocating moving the Safeway from the east side to the west side of the shopping center and building a Nordstrom in its place.

“We’re still working through with our neighbors here on the west end,” said Nick LeMaster, general manager of Cherry Creek.

The Broomfield Nordstrom is on schedule to open with the mall, said store manager Dan Alvarez.

Alvarez, Gary and public relations manager Amy Jones, gave the media a sneak preview Tuesday of what the store will look like in about three months. With construction crews still finishing the interior, the visit was mostly a tour of words.

Plastic is still down on the carpet in the women’s shoe department, but by August it will have extensive displays of career, casual and dress shoes for women. The storage area alone will hold 118,000 pairs of shoes. Pick the style, pick the color, and Nordstrom should have it, from size 3A to 14EE.

“We’re really going after size and selection, and hopefully have something for every taste segment,” Alvarez said. go to website nordstrom coupon code

Nordstrom, which had seen same store sales slip and slide a year and a half ago, changed its way of managing its merchandise and relocated most of its buyers, said investment analyst Thomas Tashjian of Banc of Securities in San Francisco.

The effort has paid off. The company has become more fashion-forward and customers have responded, he said. Same-store sales were up 5.3 percent in the first quarter this year.

“As you scan across the department store industry, only Nordstrom and Federated (Department Stores Inc.) seem to be taking fashion risks,” Tashjian said. “And it takes fashion risks to be an exciting fashion retailer.” Nordstrom is one of five anchor stores in the 1.5 million-square-foot FlatIron Crossing off U.S. Highway 36 and Interlocken Loop in Broomfield. The others are Lord & Taylor, Foley’s, Dillard’s and Galyan’s Trading Co., a sporting goods retailer.

The Broomfield Nordstrom is smaller than its sister store in Park Meadows, which is three levels, but larger than the average Nordstrom footprint of 160,000 square feet, Jones said.

The Broomfield store will feature an in-house cafe and coffee bar where customers can order specialty coffee drinks, sandwiches and salads and shop online at Nordstrom.com. But it will not have a Pub, restaurants featuring a club-like decor with television sets and dark wood.

The Seattle retailer has been closing its Pubs and converting them to retail floor space. The Pub in Park Meadows will close June 23, Gary said.

Like Park Meadows, a Nordstrom Rack – the company’s outlet store – is scheduled to open in the fall in the FlatIron Marketplace, a shopping center across from the mall that is being built by Koll Development Co.

Color Photo Workers finish the interior of Nordstrom at FlatIron Crossing in Broomfield. The media was invited to take a peek Tuesday at the two-level, 172,000-square-foot store. It will feature an in-house cafe and coffee bar where customers can order specialty coffee drinks, sandwiches and salads and shop online. By Ken Papaleo / News Staff Photographer.

This entry was posted on Tuesday, September 18th, 2007 at 2:06 pm and is filed under Art News. You can follow any responses to this entry through the RSS 2.0 feed. You can leave a response, or trackback from your own site.