‘Age of Rembrandt’ opens at the Met 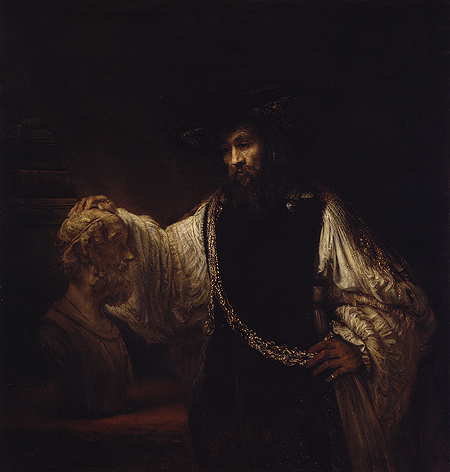 Aristotle with a Bust of Homer, Rembrandt via CultureGrrl

Holland Cotter’s guide to the ‘Age of Rembrandt’ exhibit in today’s New York Times includes some helpful tips including a map and a reminder of the power of the wall labels.  The exhibit includes works by Vermeer, Aelbert Cuyp, Jacob van Ruisdaels and Salomon van Ruysdaels.

Blogger Lee Rosenbaum notes that the exhibit is very influenced by donor power and can feel very disjointed.  The Rembrandts themselves are not together chronologically, as they were during a rare exhibit a few years ago, but according to wing and some of the “lesser known works” are elsewhere.

Regardless of the opposing views, the exhibit is worth the visit – but as Rosenbaum suggests, perhaps not the $20 “suggested donation”.  The Met is still pay-what-you-wish if the fee seems daunting.

This entry was posted on Friday, September 21st, 2007 at 11:46 am and is filed under Art News. You can follow any responses to this entry through the RSS 2.0 feed. You can leave a response, or trackback from your own site.