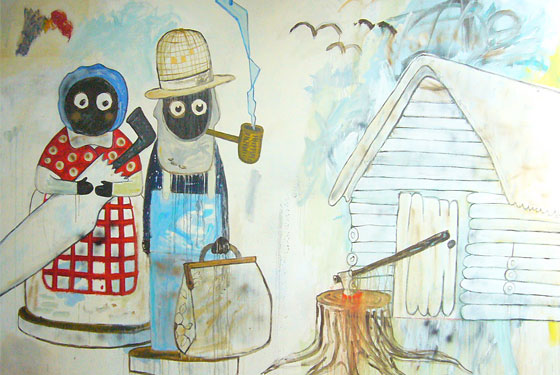 The work featured century-old African-American stereotypes, and according to curator Kathy Grayson “Jeffrey didn’t think it was appropriate for our gallery”.
The original press release included this blurb about Lang’s work:

“Wes Lang’s monsters come from the cultural detritus of a very fucked-up America. He takes images pushed under the cultural carpet and forces them back into view to be countenanced. He often takes on Native American art, black Americana, the Civil War era, or pornography in his exploration of the deleted scenes of American history.”

According to NYMag, he was in Athens until the opening and didn’t get a chance to take a close look at the pieces. Deitch is known for his shock factor, so what’s really surprising is that he chose to censor the work. Curator Grayson didn’t comment on whether or not she agreed with the decision.

Racial Stereotypes As Art (Or Not?) [NYMag]
Is the art Jeffrey Deitch booted from his gallery really that offensive? [NYMag]
Wes Lang @ Deitch Gallery [Flickr]

This entry was posted on Tuesday, September 25th, 2007 at 11:40 am and is filed under Art News. You can follow any responses to this entry through the RSS 2.0 feed. You can leave a response, or trackback from your own site.