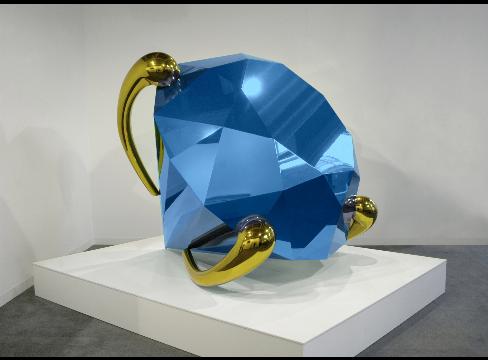 Just in case all the press and speculation created by Damien Hirst’s diamond skull the past few months wasn’t enough for you, Christie’s announced last week that Jeff Koons’ “Diamond (Blue)” would be included in their November 13th contemporary sale. If the sculpture sells for the estimated $12 million, it will set a new high for the artist.

“Blue Diamond” is actually made of polished stainless steel and chromium, part of a series including red, pink and green and a yellow version of the piece is in the works. Collector David Ganek owns the pink one, Gagosian Gallery sold the green one for $2.3 million at Art Basel in 2005, which is now owned by a collector who placed it on his terrace in River House in Sutton Place.

According to BBC News, Koons said “the diamond represents an egg, which is being fertilized by the four gold-colored prongs that hold it in place”.

Carol Vogel of the New York Times writes that even if the estimate of $12 million seems inflated, Amy Cappellazzo of Christie’s postwar & contemporary art department defends the price tag simply by “supply and demand”. The seller has already been guaranteed an — surprise — undisclosed sum no matter the result of the sale.

And the seller? A mystery, although Koons-ites say that it is German art publishing magnate, Benedikt Taschen.

This entry was posted on Monday, September 17th, 2007 at 11:01 am and is filed under Art News. You can follow any responses to this entry through the RSS 2.0 feed. You can leave a response, or trackback from your own site.