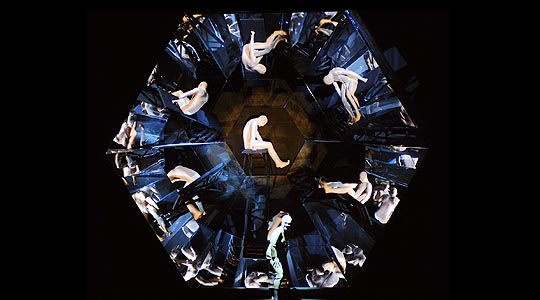 Opera-goers in Berlin viewed a special treat during Hans Werner Henze’s latest production of Phaedra at the Staatsoper. Danish-born artist Olafur Eliasson designed the sets for the two-act production.

Artnet.de’s Gerrit Gohlke said that the artist “seems not to interpret the composer but rather confront the medium of opera itself”. Eliasson’s use of prisms, two-way mirrors and lighting machines turns the stage into an interesting portal that forces the audience to stare into infinite reflections of the actors.

A retrospective of the artist’s work opened last week at San Francisco’s Museum of Modern Art and will be on view through February 24, 2008.

This entry was posted on Monday, September 17th, 2007 at 10:15 am and is filed under Art News. You can follow any responses to this entry through the RSS 2.0 feed. You can leave a response, or trackback from your own site.