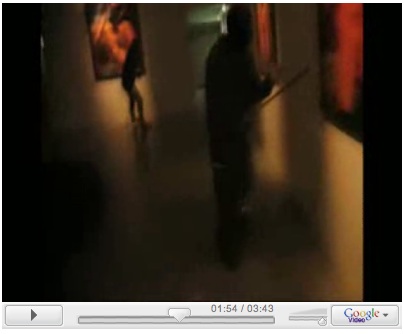 On Friday afternoon, four vandals ran through the Kulturen Gallery in Lund, Sweden and destroyed seven 50 x 60″ photographs by New York-based artist Andres Serrano. The reason? The vandals were members of the Nationalist Socialist Front, Sweden’s largest neo-Nazi political party and the exhibit was Serrano’s “History of Sex”, which featured photographs of various sex acts. A video was posted on YouTube and a description was detailed on their website.

This kind of vandalism in a “magical town” such as Lund is a shock to many, and according to an article in the New York Times, Serrano described the opening at the gallery as “the reaction was so positive. I could never imagine anything like this happening”. This same exhibit was shown by New York dealer Paula Cooper in Chelsea in 1997, who is reportedly “horrified by the attack”. 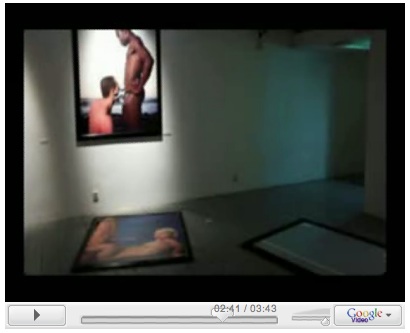 There was a gallery employee present when the vandals struck and tried to stop them until she saw the axes and crowbars they carried. The slashed photographs had a combined value of about $200,000. According to curator Viveca Ohlsson, the exhibit was divided into two different rooms, the back room containing some racier work, which is where the vandals beelined. Yelling, “We don’t support this shit!” they hacked away at the photos.

The video (complete with a heavy metal rock song) includes text that says, “This is art?” and “Let’s take a look at the ‘art’.” It shows a few photos from the exhibit then says, “Four nationalsocialists decided to express the opinion of normal people”, then documents the destruction that apparently took “90 seconds” and “completely destroyed” “the most obscene one”. They also threaten to strike again against those who “perversify” the public.

Serrano’s work has been vandalized before. In 1997, a print of a cross immersed in urine called “Piss Christ” was being shown at the National Gallery of Art in Melbourne, Australia when it was attacked and destroyed.

Blog One-Way Street points out that the attack was “completely symbolic” since the exhibit was reopened the next day. Although the vandals claim to be furious with what can be seen in the exhibit, they still show the photos in the video and during the attack.

This entry was posted on Tuesday, October 9th, 2007 at 12:34 pm and is filed under Art News. You can follow any responses to this entry through the RSS 2.0 feed. You can leave a response, or trackback from your own site.