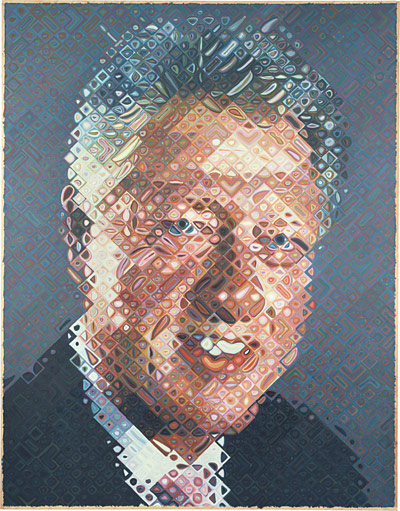 via The World’s Best Ever

Chuck Close‘s exhibit at White Cube Mason’s Yard opened yesterday. The show includes a 7 x 9′ painting of former US President Bill Clinton, pictured above. According Men’s Vogue, the portrait is Close’s first work of a political figure and will eventually be shown at the National Gallery of Art in Washington D.C.

Close says of the portrait and subject, “Bill Clinton is the most recognizable person I’ve ever painted. He’s probably one of the most recognizable people in the world, period. That presents problems, but also opportunities. I guess there’s a significant kind of connection with everybody I have in this show, but clearly my relationship to Clinton is as a citizen who admired the job he did as president—and I miss him, to tell you the truth.”
In an interview with Men’s Vogue, Close explains why he’s including the Clinton portrait in the show that features works of his family members, why he doesn’t do commissions, and how he made sure Clinton’s teeth didn’t look like Chiclets.

The White Cube show will be on view through November 17th.

Chuck Close does Bill Clinton [The World’s Best Ever]
Q&A: Chuck Close on his portrait of President Clinton [Men’s Vogue]

This entry was posted on Wednesday, October 10th, 2007 at 4:50 am and is filed under Art News. You can follow any responses to this entry through the RSS 2.0 feed. You can leave a response, or trackback from your own site.

One Response to “Chuck Close at White Cube Mason’s Yard”