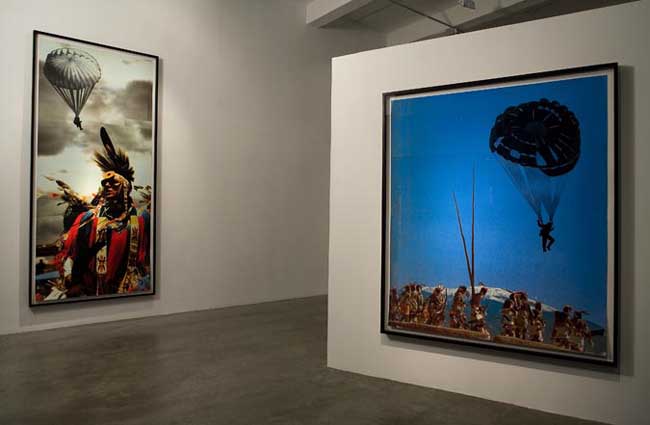 Wilcox’s solo show at Metro Pictures features large photographs and collages, that are derived from subject matter conveyed in two powerful films, “A Fair Tale” and another that features Jackie Onassis. Wilcox takes specific, often overlooked, moments of historical significance and weaves them into a story. His poignant, poetic narratives are conveyed via subtitles at the bottom of the screen. While each story describes a loss of innocence, they are also connected by their “idea of beauty in a variety of guises confronting adversity and becoming greater for the challenge” (artist’s statement). The films and photographs, are in fact, extremely beautiful in their dreamy representation of forgotten moments in history.

The first story is told by the artist himself, as a young boy in a typical American small town. He is taken to the county fair for the expected rides, animals, games and junk food. It is all set up to be a predictably happy experience. At a certain point, the story takes a turn, the elements in the story taking on significant symbolic weight. While watching Indians performing a rain dance, skydivers appear in the sky and obliterate the small boy in a parachute. He is lost and scared in its folds, but later rescued. 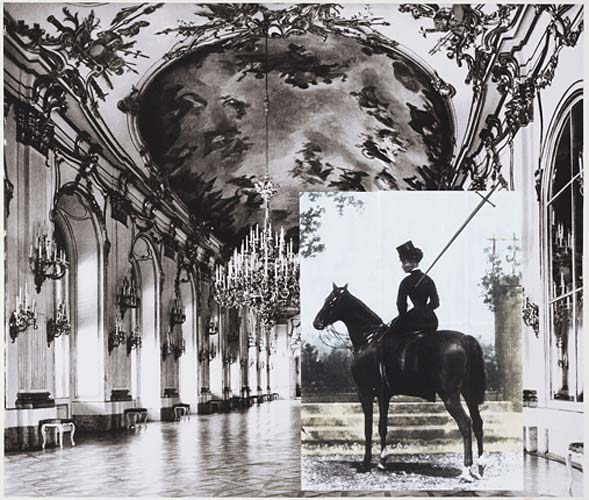 The film continues to the second story which follows Sissi, the princess of Bavaria. It is a Madame Bovary-esque story of an upper class woman intensively unhappy and bored with the role she has been given in life. Rather than remain passive, she takes up riding and soon becomes a master horse rider. Her rejection of the traditional feminine position and the seizure of her identity in an arena of men, made her a symbol of the emerging spirit of democracy. The film describes her severely tight corsets that boasted a 14″ waist while she strode atop her steed. She is later stabbed and killed, but her death is delayed by her corset.

The third story is the most familiar, that of Jerry Hall. She was a Texan beauty from a small town who moved to Paris after receiving $800 in a settlement from a car accident. This tragic event gave her the means and impetus to transform from a beauty of no particular significance to one of power and international fame. The film is shown on a 16mm projector and loops continuously between these three stories. 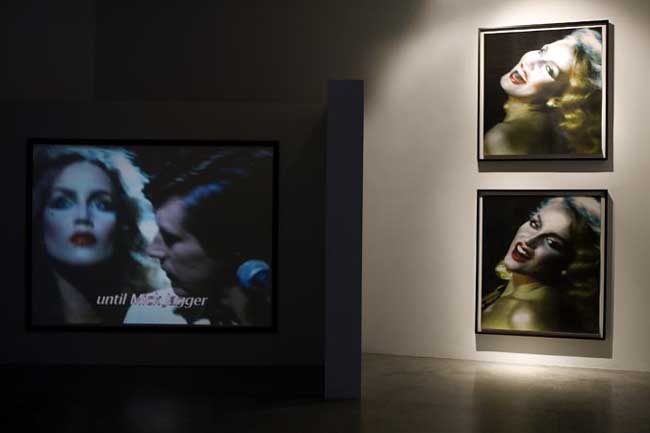 Another film features the story of Jackie Onassis and her loss of moral value in the public eye after she remarried Aristotle Onassis. As the widow of John F. Kennedy, she was under constant scrutiny. When she decided to remarry and break out of the identity the public had given her, she was harshly criticized, despite her desire to simply continue on with her life.

The show features several photographs and collages that speak to these films, highlighting the moments of symbolic intensity. The freeze frame nature of photography added to Wilcox’s deft use of collage, alludes to the nature of memory, its potency and its fragmentation.

Metro Pictures continues to exhibit intriguing artists in sharply curated shows. This gallery seems to have found a way to do more than just hang art on the walls. By astutely placing, lighting and selecting the works exhibited, their shows transform the white box without relying on spectacle. Simultaneously, each piece functions as an integral part of a larger idea taking place throughout the space.

This entry was posted on Thursday, October 4th, 2007 at 10:19 am and is filed under Art News. You can follow any responses to this entry through the RSS 2.0 feed. You can leave a response, or trackback from your own site.